When Karl Hillway was in college, he lost a roommate to suicide.  He and the other surviving roommates had a difficult time processing the grief and trauma of losing someone they lived with. The school was unaccustomed to dealing with such a loss, and offered no counseling, outreach or other support to the roommates.

After bouts of depression, confusion and guilt, Karl sought mental health support on his own. Years later, while serving in the Army, he drew on his loss experience in college to better support his comrades when there was a suicide death in their ranks. And now, he takes what he’s learned to support grieving children as a military mentor and leader at TAPS Good Grief Camps. 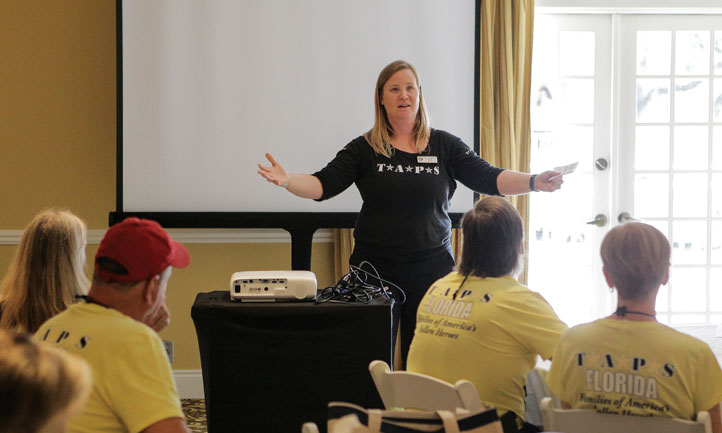 Dr. Shauna Springer, senior director of TAPS Suicide Prevention and Postvention, is shown addressing a group at the 2018 National Military Suicide Survivor Seminar in Palm Harbor, Florida. She leads a podcast on the impact suicide grief has on three survivors.

Listen to the Podcast

Dr. Shauna Springer, senior director of TAPS Suicide Prevention and Postvention, talks to Karl in a podcast about the grief that follows a suicide loss. She also speaks with Brian Kinsella, an Army veteran and the co-founder and chairman of the nonprofit Stop Soldier Suicide, and with Dr. Caitlin Thompson, vice president of Community Partnerships within the Cohen Veterans Network.

Brian shares stories about how the suicide loss of fellow soldiers had an impact on him during his time in the Army and how that has led to the work he does now with Stop Soldier Suicide. Caitlin describes the impact of the suicide loss of a patient during her internship training year and reflects on how this experience has shaped her career in suicide prevention.

The guests on the podcast share personal, private experiences following suicide loss, and what lessons can be learned to stem the incidents of suicide in our own communities. Cohen Veterans Network sponsored the podcast by TAPS Suicide Prevention and Postvention Initiatives to explore stories behind the story of suicide loss. CVN serves post-9/11 veterans and their families through a nationwide system of mental health clinics, and partners with TAPS to provide innovative support around suicide loss, such as couples retreats for battle buddies and their spouses. Learn more about TAPS suicide loss support and resources.