I would like to thank you for organizing yesterday’s event.

My wife, kids and I went to the New England Patriots training camp event yesterday not knowing what to expect. I know that the NFL was so gracious to allow us a “VIP” status, and that you are never sure exactly what is going to happen, so we went with no expectations other than to watch our favorite team practice.

What happened when we got there was nothing short of magical! We were able to observe a group from the United States Navy re-enlist their Chief Petty Officer. The ceremony was led by the Patriots' Joe Cardona, who is not only a naval officer, but also the player that represented my fallen sailor, Ben, during the NFL’s Salute to Service.

We know that it’s fairly random which player comes to say hi or sign autographs, but the fact that BOTH teams came to our end of the field to watch the re-enlistment and then stayed around was absolutely amazing.

I am attaching a photo that I took of my son Dan and the Pat’s quarterback, Mac Jones. For days he had been talking about “taking a photo with Mac.” He knew it was actually only a very remote possibility for Mac to come over to our end of the field, let alone let Dan pose with him. 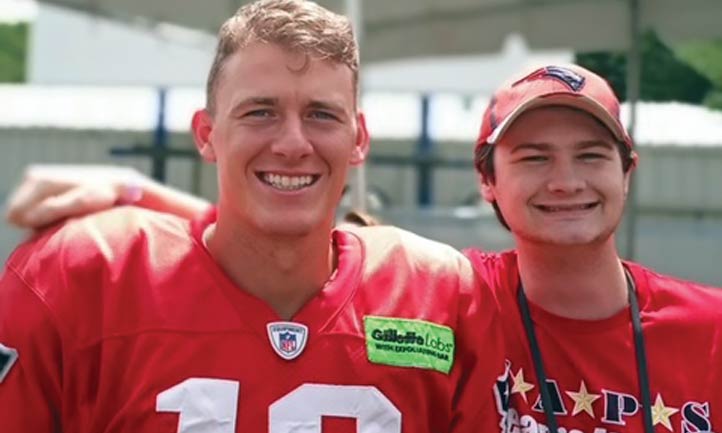 I haven’t seen my son smile like that since his big brother died. My wife, Teri, and I were going over the pictures, and we both started to cry when we saw Dan’s expression. It was so beautiful to see joy in my son’s face. I don’t think his grin could get any larger!

I know that this will sound really corny, but if anyone at TAPS ever questions themselves about the work that they are doing, please just remember Dan’s smile.

teams4taps works with sports teams across the country to bring joy to surviving military families and to honor the lives of their fallen heroes. Through teams4taps, TAPS families have been able to honor their loved ones with teams across America, and even in Canada and England. If your loved one had a special story or connection with a sports team or professional athlete, we would love to hear it. Submit your stories and photos via email to teams4taps@taps.org.