Our Stories
An American Hero and Friend to Gold Star Families

This summer, our community lost a hero who had become a familiar face to surviving military families. Hershel "Woody" Williams was a Marine whose uncommon valor was equaled by his uncommon kindness. A Medal of Honor recipient, his compassion and his peer-based understanding of loss and grief were learned at a young age and only grew during World War II, through both his Western Union work delivering life-shattering telegrams to Gold Star families and his military service fighting in the Pacific. 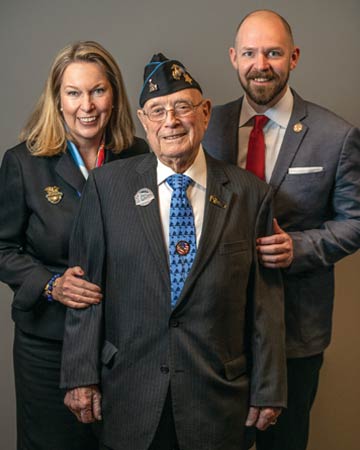 Chad Graham, Woody's grandson, has been tirelessly supporting the mission of the Gold Star Families Memorial Monument, and has worked closely with TAPS to bring hope and healing to the families of our nation's fallen heroes. 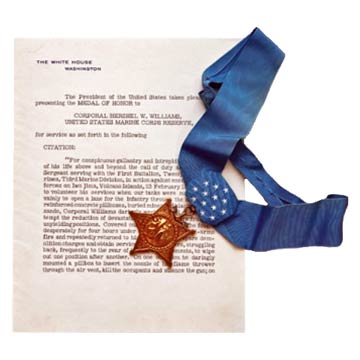 From the Medal of Honor citation for Woody Williams: For his conspicuous gallantry and intrepidity at the risk of his life above and beyond the call of duty as demolition sergeant serving with the 21st Marines, 3d Marine Division, in action against enemy Japanese forces on Iwo Jima, Volcano Islands, 23 February 1945. His unyielding determination and extraordinary heroism in the face of ruthless enemy resistance were directly instrumental in neutralizing one of the most fanatically defended Japanese strongpoints encountered by his regiment and aided vitally in enabling his company to reach its objective. Cpl. Williams' aggressive fighting spirit and valiant devotion to duty throughout this fiercely contested action sustain and enhance the highest traditions of the U.S. Naval Service.

During the eight decades that followed the war, Woody continued to embrace the loved ones of our nation's fallen heroes with his compassion and understanding. And across the nation, through the Woody Williams Foundation, he has placed Gold Star Families Memorial Monuments to honor all those who served and died and remember the families they loved and left behind. Initially the foundation’s goal was to establish a Gold Star Families Memorial Monument in Woody’s home state of West Virginia. Once that monument was complete, a new mission became clear to Woody and those at the Woody Williams Foundation: Establish these monuments in as many communities as possible in all 50 states and U.S. territories. Today, there are 106 Gold Star Families Memorial Monuments all across America, with 70 more in progress.

"Woody carved in stone that which he always carried in his heart. And in our hearts, we carry him now too——an uncommon hero with an unending legacy." ~ Bonnie Carroll, TAPS President and Founder 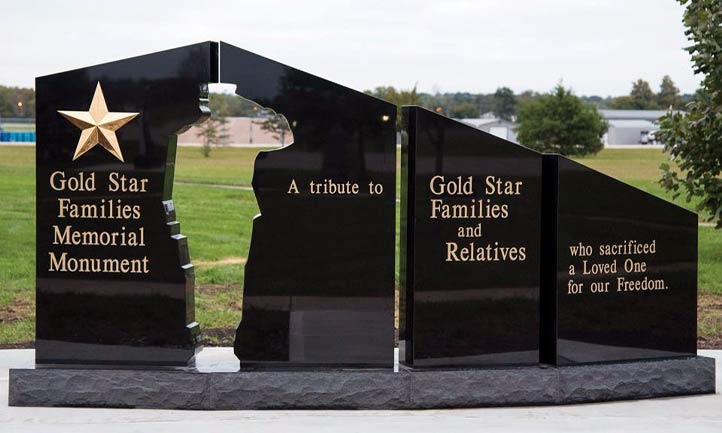 Gold Star Families Memorial Monuments are a two-sided tribute made of black granite. One side bears the words: Gold Star Families Memorial Monument, a tribute to Gold Star Families and Relatives who sacrificed a Loved One for our Freedom. The other side tells a story through the four granite panels: Homeland, Family, Patriot, and Sacrifice. At the center of this tribute, is a silhouette of a saluting service member which represents the Legacy of the Loved Ones who have paid the ultimate sacrifice for our Freedom. Together, these features tell each community's unique story based upon the pillars of the foundation.