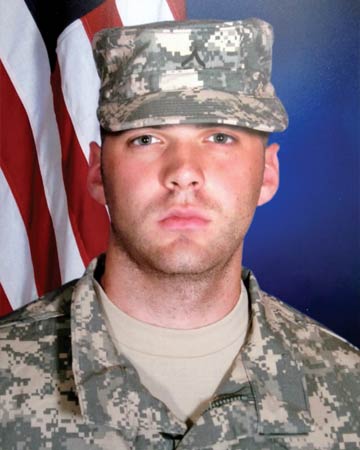 It was Super Bowl Sunday, February 2, 2014. My family and I were settled in front of the television watching the game, as we do every Sunday during football season. It wasn’t quite half-time, rather late in the day, so we were a little more than perplexed to hear someone knock on our front door. In their Army dress blues, two men had come to solemnly deliver the gut-wrenching news that our son U.S. Army Specialist Tyler Brent Hammett had died earlier that day.

It is the news that will alter the course of your life forever; it is the news that begins the grief journey. The immediate days and weeks that follow will bring a rapid, cascading series of arrangements and decision-making. People will visit, lovingly deliver food, send cards and flowers, etc. A lot will happen, but it is all a blur in retrospect.

One early memory stands out. Among the sea of sympathy cards, I remember receiving one from TAPS. I had no idea who they were, but I could roughly figure that it had something to do with Gold Star families. So many hazy questions had me wonder: What was a Gold Star family?, Were we one now?, How did TAPS know?, What is 24/7 assistance for grieving families.” I just set aside the card with the others.

Over the next few weeks and months, that peculiar time occurred when the visits waned - the casseroles stopping coming, we had exhausted our leave at work, and we we watched people carry on with their lives. But, we were hurting. We were still waiting for Brent’s phone calls, looking for his silly Facebook posts, keeping his room clean for when he was on leave, and buying his favorite foods at the grocery store. Feeling so alone, we just tried to stay busy. But, we were still stuck. No one understood – or so we thought.

It was in those difficult days that TAPS would fill the painful void.

The TAPS Magazine had started appearing in our mailbox. I’d make it about halfway through an article before I couldn’t see through with tears, then book mark the page. But with time, I would muster the strength to pick the magazine up again and finish an article. This cycle went on for a while. Wash. Rinse. Repeat. Eventually, I could get through an entire issue, and I began looking forward to the magazines and email correspondence from TAPS.

It was like meeting up with friends, being in a long-distance embrace with other people who understood my grief. 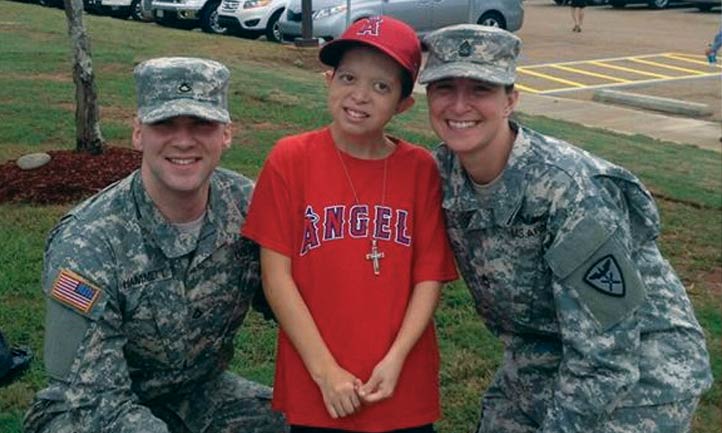 Brent did a service project with his Staff Sergeant to build playgrounds for children with disabilities near his base in Fort Rucker, Alabama. I LOVE this photo because Brent REALLY was that kind of guy to look for volunteer projects in his free time. He was even coaching a youth flag football league at the time of his death. For his volunteertism, he was postumously presented with a Certificate of Commendation by the Mayor of Troy, Alabama. 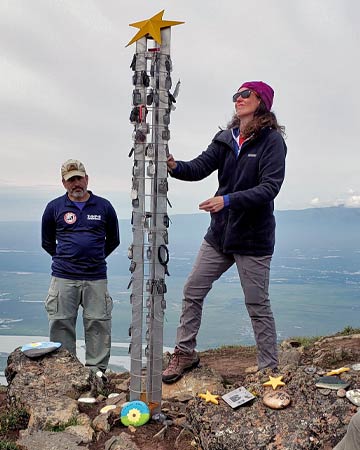 Elizabeth visited the summit of Gold Star Peak while attending the TAPS Alaska Survivor Experience in July 2021. TAPS gave us dog tag replicas of our loved ones to add to the monument at the summit.

After about a year without Brent, an email asked survivors to write a remembrance of our loved one about a special memory of our local sports team. For the first time, I reached back out to TAPS. It felt greatly cathartic to share a story about Brent being the only Marylander stationed in Alabama when our Baltimore Ravens won their second Super Bowl. We would attend our first TAPS event a few months later, a youth Play 60 clinic sponsored by the Baltimore Ravens. It was here that my husband Michael, younger son Gareth, and I would meet the amazing Jessica Harper and Diana Hosford of the teams4taps division. It was the start of a beautiful friendship.

Adolescents and teens have an especially difficult time coping with their grief while also dealing with quintessential growing pains. I knew that my husband and I would probably be okay in more intimate TAPS gatherings, but we wanted our youngest to feel comfortable exploring the TAPS community with us. Our son Gareth was only 12 years old when he lost his big brother, which is why I initially turned my attention to TAPS events that centered around one of his favorite things: sports.

Committing to singular sporting events and casually meeting with other survivors felt appropriate for us in our early stages of grief. Sports are my family’s happy place – our escape – so connecting with teams4taps just felt right. Attending sporting events with TAPS taught us that it was okay to laugh again, that we were entitled to individual joy even as we each continued to grieve. Since our sports connection felt comfortable, we continued this route within TAPS for several years.

We have attended numerous sporting events through teams4taps with the Baltimore Ravens, Baltimore Orioles, and the Washington Capitals. In 2017, we were welcomed to the Ravens training facility and met many players and Coach John Harbaugh. The Ravens organization even honored Brent during the next game! The memory of Brent’s face on that hometown jumbotron, while hearing our fellow Ravens’ fans cheer as Brent was honored, still brings instant bittersweet tears to my eyes.

In 2019, we took an extended TAPS trip to the Pro Bowl experience in Orlando, Florida. Gareth wrote an essay to attend the trip discussing the correlation between him playing in a local flag football league and Brent coaching a local youth flag football team while serving. This trip was the first time we ever collectively shared stories and shed tears with other survivors in a group setting. And still, sports was the element that brought us survivors together. 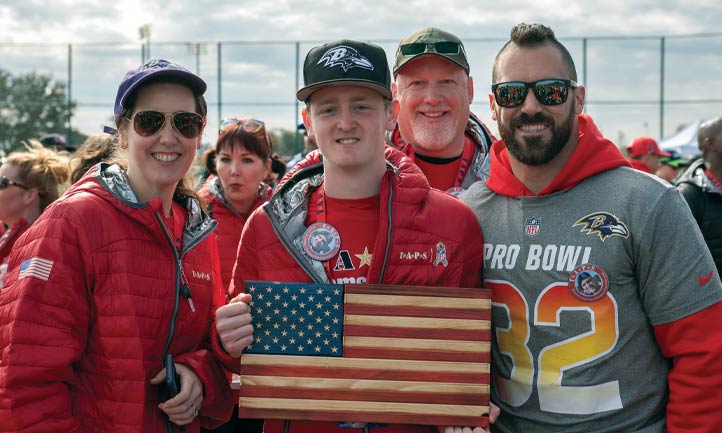 The Hammett family at the TAPS Pro Bowl Experience in 2019 in Orlando, Florida. 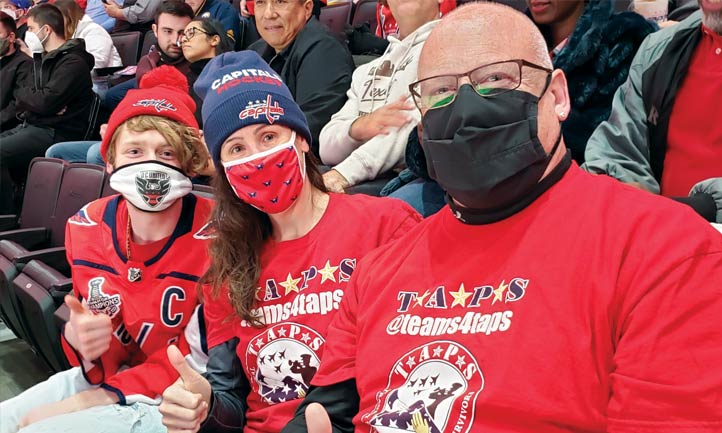 The Hammett family at a Washington Capitals game with teams4taps.

With time, each family member has made additional steps (each at their own pace!) towards meeting more survivors within the TAPS family. I found immense hope, healing, and camaraderie in attending a Women’s Empowerment Retreat. I also recently participated in my first TAPS Expedition: climbing Gold Star Peak in Alaska, where TAPS leaders use the profound healing that nature offers us. I have also become a peer mentor, Gareth and I have spent a few days volunteerting at TAPS Headquarters, and my husband I recently attended our very first regional seminar. Whether your grief journey has just begun or you are eight years or 15 years+ along, TAPS is ALWAYS there to meet you where you are.

Each survivor knows that grief can overtake you at any time – some days, you cope better than others. Being surrounded by a compassionate community is invaluable. TAPS offers numerous, unique ways to help us all on our grief journeys - from large-scale gatherings to sporting events, support groups tailored to our relationships with our lost loved ones, and so much more. The sheer beauty of TAPS is that the organization is so multi-faceted. It reaches all survivors in ways that suit their comfort zones, be it in print, online, and in-person through various physical settings. My family’s gateway into this precious community happened to be sports. Having that community meet us where we are on any given Sunday is a bittersweet gift.