At my son Carl’s visitation, my friend Robin handed me a book and said, “Just a little something I’ve had set aside for you.” I tucked it in my bag and walked over to greet a new arrival. After the internment service and before another appointment, I opened her gift the next day. Titled “Knit the Sky,” the book was designed to encourage creativity. Its first project suggestion was to capture the colors of the sky for a full year in a scarf. This idea resonated so much that I quickly took a picture of the sky with my phone.

Knitting the Sky for a Full Year

The next day, I brought the book to my local yarn store after meeting with my Casualty Assistance Calls Officer to sign more paperwork. I shared the project idea with the store owner, explaining “I’m going to knit the sky for a full year and remember all of the days.” We talked about adding beads for rainy or snowy days and charms for special days. And so, I left with six cakes of yarn: dark grey, light grey, off white, white with flashes of other colors, light blue, and sky blue. I went home, cast on 40 stitches, and worked two rows for the first day, internment day, and the current day.

The knitting needles felt so right in my hands, but I couldn’t go any further. Although I wanted to continue, I had to wait for sunrise, noon, and evening to know what color yarn to use– to know what color the sky would be. I already picked up beads for rainy days and different beads for snowy days at the store, so I ordered a bag of charms online for the holidays and special days that I didn’t want to celebrate. When the charms came, I sorted them into two piles: one for the scarf and one for other projects. 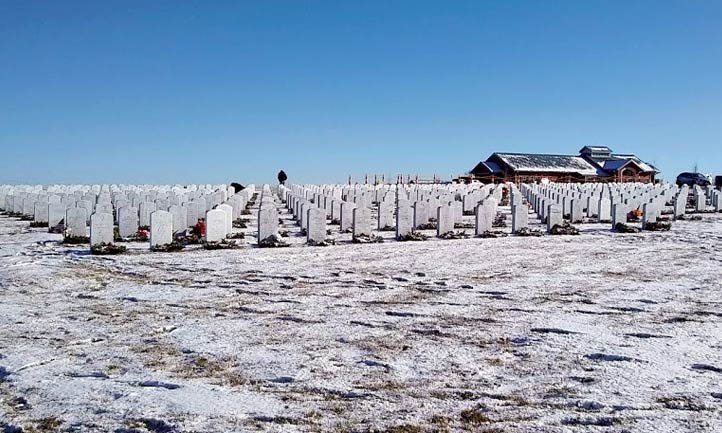 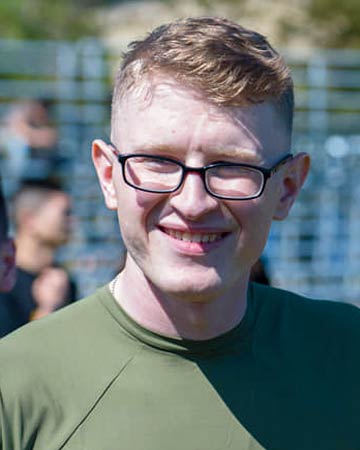 Paying Attention to the Color of the Sky Every Day

Days turned into weeks, and weeks turned into months. Somedays, I was too tired to knit, so I wrote down the color of the sky in my journal. I had a code that would tell me which colors to use for that day. Light blue and speckled was for days with clouds that ran across the sky. Dark blue, held double was for days with no clouds, just a bright sun. If it were rainy, I used two shades of grey and added beads in different blue shades. I would put beads at the beginning of the row if it rained in the morning and at the end if it rained at night. I used fewer beads for rain showers than for downpours. Crystal beads were for snow, spread apart for flurries, and packed together for winter storms. One morning while driving to work, I realized that I had forgotten about fog, so I added small, green-grey beads on the right-hand side.

I added my first charm for Halloween– skull and crossbones. I remember adding a ring of red, orange, yellow, green, and blue beads to mark late-season thunderstorms that left beautiful rainbows in the sky. Later, I added music notes for Carl’s birthday, a pumpkin for Thanksgiving, a tree of life for my birthday, and a package for Christmas. I included a frog for leap day on February 29 and a butterfly for Easter.

On August 10, just before nine o’clock in the morning, a sudden wind blew from the northwest. The trees bent almost to the ground from the force of the winds. And then, it was quiet, still because the storm, the derecho, had moved east. I knew that I had to add this weather event to my scarf, but I was unsure how to represent 60 mile per hour winds. Finally, after a few days of deliberation, I added another thread to my scarf just for that day, just for those two rows: a thread in a different shade of blue strung with dark iridescent beads. I deliberately left long loops of thread between each stitch on the second row, with a bead on each loop. I hoped that the weight of the beads would help the loops sway back and forth to resemble the trees swaying in the wind.

And then, it was September. I added a charm in the shape of a wing to mark Carl’s angel day, an airplane to mark the day he came home for the last time, a star for the next day, and a heart for the day of visitation. The final two rows brought tears as I worked them because it had been a full year since the burial– I had finished the scarf. 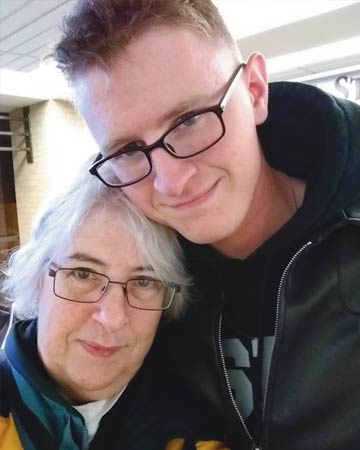 A few thoughts on why this helped my Grief Journey

This project forced me to pay attention to something outside of my grief. Every day, I had to look or go outside and figure out what color the sky was to know how to combine the six yarn colors to represent the sky. I had to pay attention to rain, snow, and fog to include that in my project. I got to add the charms for all of the hard days, the first birthdays, the first holidays, and the first anniversary of his death. I had to decide how many beads to add or where to place them on rows. I could not work ahead– I had to wait for the next day to add the next pair of rows. I could allow myself to fall behind as long as I wrote down the color, but I couldn’t jump ahead. 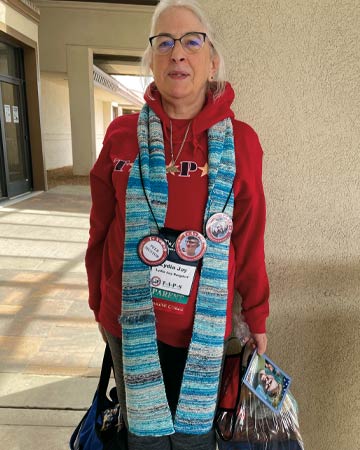 The Healing Comes from Making the Scarf, From Doing the Work

This project was tactile, as I used my hands and felt the yarn slip through my fingers. I had to carefully guide the beads onto a small crochet hook to add them where needed. I had to loop the thread through the charms to make sure they were securely attached. After I had finished the last stitch, I had to weave in the ends and wash and block the scarf to finish it.

My scarf is an intensely personal project. I had difficulty expressing why I could not make one for someone who asked, and I just said no. The healing isn’t in the scarf; the healing comes from making the scarf, from doing the work. Yes, when I wear it, I feel the warmth of the wool against my skin and its weight comforting. It also helps me tell the story of the year that didn’t feel right. The year that I survived because the yarn slipped through my fingers and around my needles; forty stitches back and forth. Forty stitches to mark each day that I had not quit or given up.

Choosing Your Own Project

Your project doesn’t have to be a scarf. It could be a quilt, an afghan, or a sampler. It doesn’t have to track the color of the sky either; it could track the high or low temperature. It can also be a way to track your mood or stress. But, you have to make the commitment to the project, tracking your chosen idea daily.