Kim Ruocco has brought energy, care, and creativity to her work with TAPS, communities, agencies, and organizations nationwide. Kim has beautifully become the living legacy of her loved one, and we hope her accomplishments and their impacts inspire you!

Throughout more than a decade of dedicated service, survivor Kim Ruocco has inspirationally reduced the silence and stigma surrounding suicide. As a fellow survivor, she has brought empathy, compassion, and creativity in developing comprehensive, peer-based programs within TAPS that offer comfort and care to those grieving the loss of a military loved one to suicide. Kim is a world-renowned subject matter expert on suicide bereavement, and she has beautifully become the Living Legacy of her late husband Marine Major John Ruocco. Here at TAPS, we celebrate Kim’s career of selfless service and honor her extraordinary accomplishments and their life-saving impacts! 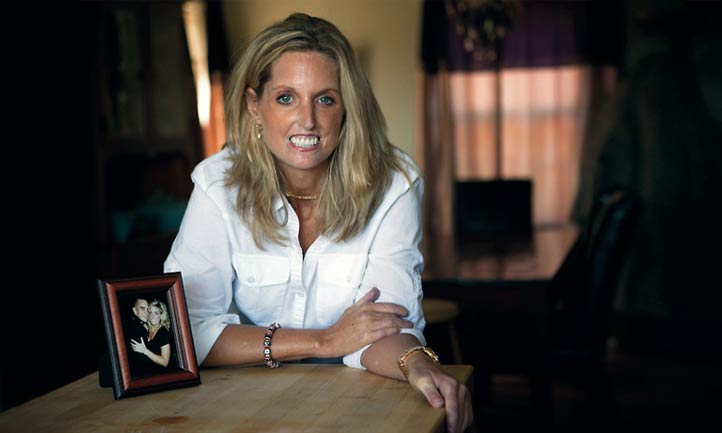 There comes a time along the journey for survivors when we may begin to ask ourselves challenging questions. Who am I now? What is next for me? How can I make meaning after what has happened? After we have stabilized complicated issues and processed intentional, focused grief work, this concept of post-traumatic growth (PTG), may arise as we move away from our past pain towards our lives ahead. Kim Ruocco elegantly exemplifies PTG by combining her personal suicide loss experience, educational background, and information gathered from thousands of survivors to help others better understand the complexity of suicide and reduce suicide in those at risk.

Kim often shared that at the time of her husband John’s death in 2005, there was very little support or reliable information available on surviving, let alone on grieving, the traumatic, devastating loss of a loved one to suicide. As a military widow, mother of two young boys, and social worker, she recognized the tremendous need to help the rising number of military suicide loss survivors like herself and her family. Kim passionately took on this mission and created a program within TAPS to provide compassionate care to all survivors of military suicide loss. By serving military families, service members, and veterans, she helped guide others along their grief journeys. Kim has become a leading advocate for best practices in suicide postvention, and she has done so while honoring John, enhancing the meaning and purpose of his life.

In 2009, Kim led the way in planning the TAPS National Military Suicide Survivor Seminar (NMSSS) and Good Grief Camp (GGC), the first of its kind. During the NMSSS, which is now in its 13th annual year, TAPS supports survivors of suicide loss by offering them hope, healing, and renewed opportunities for personal growth. Survivors have the chance to participate in activities, workshops, and small-group sharing sessions, where they can connect with leaders in the fields of suicide grief, trauma, and healing. Military mentors support suicide-bereaved children through the GGC, where they learn how to honor their loved ones while connecting with other surviving kids. Through this program, Kim filled a tremendous need and helped bring survivors of military suicide loss together to share their stories, struggles, moments of reflection, bursts of hope, and loving support.

A comforting presence and role model, Kim has extended loving care and sound guidance at events at TAPS and beyond. She championed the development of the TAPS Suicide Postvention Model™: A comprehensive framework of healing and growth, an article published in Death Studies, the leading, peer-reviewed journal in the bereavement field. A three-phase approach to suicide grief, the Model™ offers a framework for survivors and providers in the aftermath of a suicide. It guides survivors on a journey of healthy grieving and towards achieving posttraumatic growth. Kim’s unwavering dedication to suicide postvention has helped TAPS build a loving foundation to support all those seeking care following a military suicide loss. Along with Kim, TAPS is committed to providing a safe space for survivors to turn to for grief support, healing, and growth, to continuing our efforts on the front line of changing and saving lives.

Kim Beautifully Models How To Make Meaning After Tragedy

Our TAPS family is blessed to provide a compassionate, welcoming space for survivors to share their love and legacies, empower fellow survivors, and transform their healing journeys. Leading by example, Kim has demonstrated hopeful ways of grieving and recovering through loss. Her life’s work models how to make meaning after tragedy and how both growth and healing are possible after suicide loss. We are honored by Kim’s career of exceptional, heartfelt service, encouraging all survivors to seek out care and striving to become a loving light in the darkness along their grief journeys. Recognizing and filling an urgent need, Kim is truly a living legacy of a life lived with love, as she has laid a critical foundation for ongoing hope and healing.

"In my early grief, I looked outward for answers. I asked questions, read books, saw therapists, tried different churches, and met with mediums and psychics. I became a gatherer of healing knowledge. I was feeding an inward need to make sense of John’s death for my boys and myself. As I gradually became able to ground myself in even the smallest comforts and remembered certainties, I realized that my own search might be able to help other families who, like me, needed to make sense of it all."

"At TAPS, we have been able to raise awareness and show surviving families that they can consider the possibility of hope."

John and Kim Ruocco and sons

TAPS has created special resources and programs that provide compassionate care for survivors of military suicide loss. To learn more about our offerings and impact, call our 24/7 TAPS National Military Survivor Helpline at 1-800-959-(TAPS) 8277, visit our Suicide Loss Support page, or send us an email to suicidepostvention@taps.org.