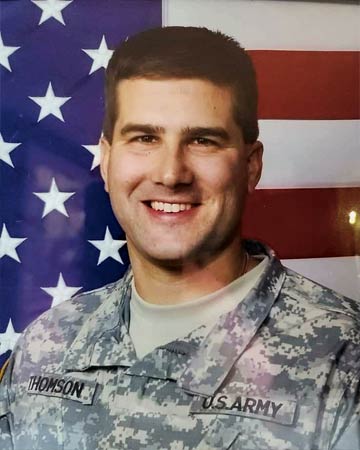 Lt. Col. Todd Thomson proudly served his country for 20 and a half years. The love he had for being a soldier made him get up in the morning; it made his wheels turn. As a logistics officer, he spent time on various posts in the U.S., South Korea, and Iraq. He served for 18 months at Fort Dix, New Jersey, in 2003 and at Camp Victory in Baghdad, Iraq, from 2007 to 2008.

Throughout his military career he was a completely healthy man with no history of disease, in good physical condition and tobacco never touched his lips. But that changed in late August 2012, when he had to report for duty for two weeks in Florida to provide logistical operations for one of the national conventions. When he returned home two weeks later, in early September, he told me, “My stomach hurts, right around my navel.”

My healthy, strong, active husband became seriously ill in a short period of time. He lost 30 pounds in a matter of three to four weeks, was in the emergency department three times and cried due to the pain in his abdomen. On October 16, 2012, he was finally admitted into the hospital where, after an emergency surgery, it was discovered he had stage 3C colon cancer. 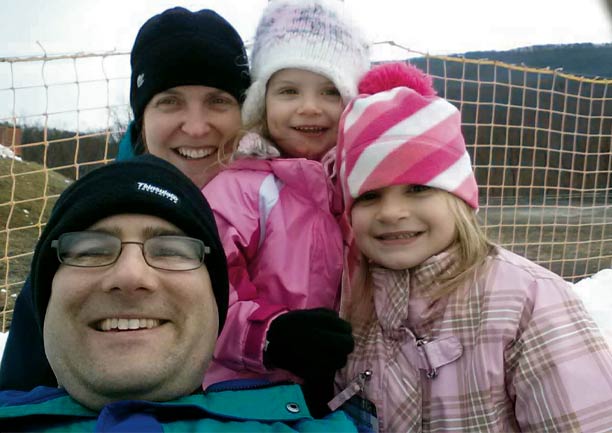 Todd and Robyn Thomson with their daughters 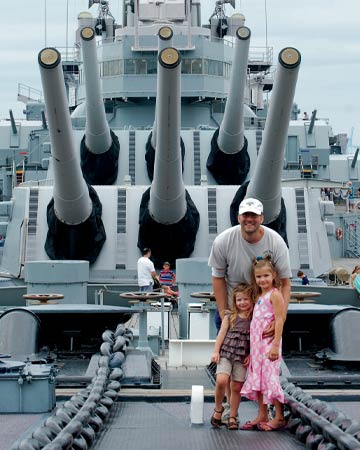 My career as a speech-language pathologist was to rehab people who were receiving or had completed chemotherapy, radiation, and biologic treatments for digestive cancers. When I learned about my husband’s diagnosis, I immediately recognized that the cancer metastasized in the incorrect pattern for colon cancer. Typically, colon cancer metastasis goes to the lungs or liver, which have better outcomes. Instead, and in accordance with the rare pattern, it spread to his peritoneum, which is the serous lining of all the organs of the abdomen.

This led my family to ask deeper questions and seek more testing. The results of the genetic testing of the cancer indicated it was one of the rarest forms of colon cancer that is diagnosed in our country. We met with the leading colon cancer specialist in the country, at Johns Hopkins University, who wrote that the type of cancer Todd had was not a familiar mutation, but one from exposure to toxic materials.

The specialist also indicated that cancer from toxic exposure takes approximately five to ten years to become an emergent situation, as Todd experienced. Since there was no research on this type of cancer at the time of Todd’s diagnosis, there were no drugs to specifically treat, destroy and eliminate the cancer he had. Consequently, he was administered traditional colon cancer chemotherapy and biologic therapy. It was a long and painful two and a half years for Todd. Todd suffered, and myself, our daughters and his family could only helplessly watch him.

On March 13, 2015, Todd passed away and was no longer in pain. Our daughters were six and three years old when he died. Our youngest was a baby when he was diagnosed, so she has no memories of her father being healthy. My oldest daughter suffers emotionally because she watched her father’s 6-foot-7 body wither down to nothing. The hardest moment of my life was not hearing the diagnosis of Todd’s cancer, or even holding him as he let out his last breath; but rather, coming home to tell my daughters that their dad died and watching part of their childhood innocence and joy leave them. I owe it to my daughters, and our country owes it to my daughters, to make sure their father is recognized as the courageous man who proudly served, suffered and died for his country from toxic exposure.

My daughters and I thought we would be lost after Todd’s death. And we would have been lost without TAPS, that is for certain. TAPS has helped connect us to others whose military loved ones died due to cancer or illness.

I have learned that our stories are so incredibly similar; from how we managed the illness, to the feelings we encounter on our grief journeys. These connections validate my own story; they remind me that I am not alone in my experiences and emotions. Meeting others through TAPS whose military loved ones died due to an illness has taught me that our grief is processed in different ways, not better or worse, just – different.

As a nation, we are only beginning to understand military death due to toxic exposure and how to best help families, like mine, process this specific kind of grief. With the support, guidance, and expertise of TAPS, we are heading toward immense discovery to help illness loss survivors heal from the most traumatic events in our lives. All this is possible through the kindness, compassion, and ingenuity of TAPS, for which my daughters and I are forever grateful. 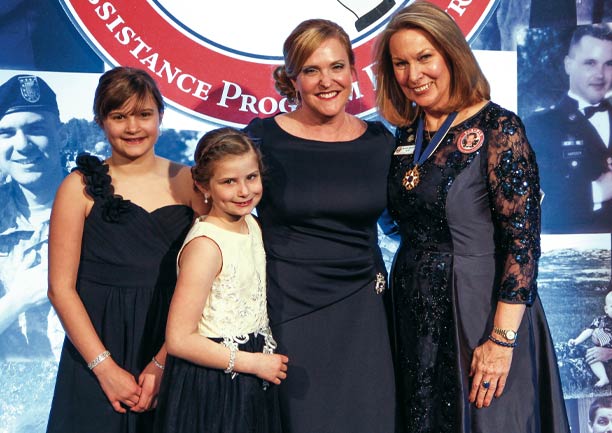 Robyn and her daughters at the 2019 TAPS Honor Guard Gala

Together with other partners in the military and veteran community, TAPS is working to advocate for veterans exposed to toxins, their families, caregivers, and survivors. Through these partnerships, we have made great strides over the past three years to create a growing awareness of the issue of toxic exposure by enlisting support from other organizations, such as the members of The Military Coalition (TMC).

According to Bonnie Carroll, TAPS Founder and President, “our partnership with the Elizabeth Dole Foundation (EDF) and the American Red Cross Military and Veteran Caregiver Network (MVCN)... will ensure a seamless transition and delivery of services to our nation’s military and veteran caregivers and survivors.”

Death by illness is one of the leading causes of death reported by military survivors who come to TAPS. Since 2008, TAPS has been supporting 14,207 survivors whose military loved ones died due to an illness. While we know there’s a significant number of veterans who die of common illnesses, we have become deeply concerned that, like the Vietnam era, post 9/11 veterans have been exposed to toxins that are known to cause terminal illnesses. TAPS is working to gather survivor stories and aggregate data to better understand the scope and types of illness loss.

If you are an illness loss survivor and would like to share your story of your military loved one, we invite you to email us at editor@taps.org. Further support for those grieving the death of a military loved one due to illness can also be found at the Caregiver to Survivor webpage.