When the knock on the door came, we were very far away. We were in Australia and the flight home was the longest journey of my life, not counting the miles. I just wanted to sleep and hopefully not wake up. My son, Lance Cpl. Niall W. Coti-Sears died on June 23, 2012, after being mortally wounded by an IED in Helmand Province, Afghanistan.

For the first two months following his death, I dosed myself with wine and anti-anxiety medication to fall asleep. Eventually, I “woke up” and decided to make memory boxes, starring Niall, for myself, for family and for friends. This put me on the road towards healing. Infused with the spirit of Niall, these boxes would inspire a little joy. Just the idea of creating these memory boxes gave me some hope.

I made the first memory box for Niall’s half-brother, Adrian. Inside, I placed a lock of Niall’s hair tied with a ribbon and one of his baby teeth. Adrian was a fascinated three-year-old when Niall was born and became a caring big brother. I also placed other artifacts in the box that represented Niall: a photo of a guitar, a tiny piano, an “Admit One” ticket, photos of Niall as a child and as a young man, and a Marine Corps symbol for Niall’s pride and love of the Corps.

The next boxes I made went to my parents and Niall’s former girlfriend and first love, Angie, and his step siblings. Afterwards, I started to make them for other parents who lost their children. 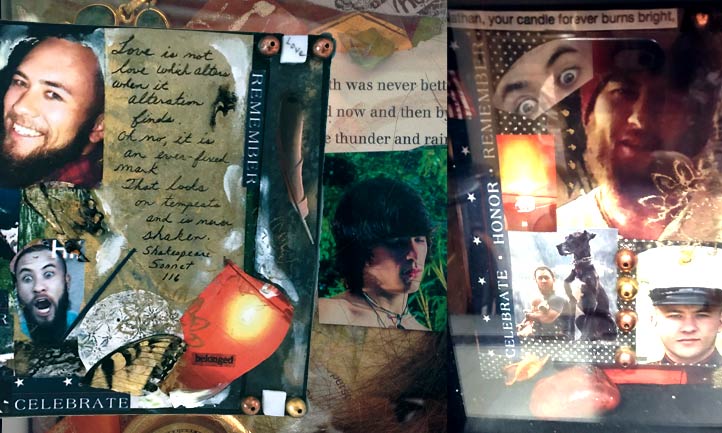 The first was for the family of Cpl. Nathan Brooks, a close friend and fellow Marine of Niall’s, who died by suicide in 2016. Nathan called to wish me a happy Mother’s Day six weeks before he died. I made two boxes for his family. I also made a box for the mother and sister of a former student of mine, Nicole, who died by suicide.

Making a memory box involves shaping a life into a small space by choosing items and pictures that show some of the special qualities of that person who is so very loved. It is not a complete picture, but rather a snapshot. It is a visual poem.

This artistic process gives me such a sense of liberation, as if I’m feeling my way out of darkness and infusing myself with light. It helps me to focus on the joy that person gave my life and can continue to give in the form of memories. I want the parents, siblings and other loved ones to feel a sense of happiness and joy, just as I do, when they see their own box; it is something that will temper the sadness.

I recently started making the memory boxes again after taking a break for about two years. I felt newly inspired by reading the 2020 summer issue of the TAPS Magazine. Every article just pumps me up! I’ve gained value from others who share their story and all the creative ways TAPS Families dedicate their time and energy to honoring their loved ones.

As I create more memory boxes, I wanted to share with all of you how making memory boxes of your own, starring your loved one, might offer healing in your own grief journey.