How One Survivor Continues to Give To Others 20 Years Later

September 11, 2001, set the stage for this millennium. Looking back twenty years later, the impact of that day cannot be understated: the launch of the Global War on Terror, political changes across the globe, a transition to more heightened security, the creation of the Department of Homeland Security, and even animosity toward those who resembled the terrorists responsible. 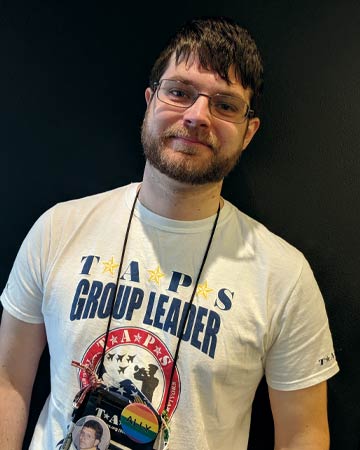 The impact I felt most from that day, however, was the loss of my father, Joseph J. Pycior, Jr., who was killed while working in the Naval Command Center in the Pentagon. My family had to immediately adjust to life without Dad; we left military housing, switched from homeschooling to public school in New Jersey, and lost our connection to the military.

Life was never going to be the same.

Since I was a child at the time, I don’t quite remember what happened and what TAPS did in the direct aftermath. I think I, like many when faced with significant trauma, went into survival mode. I remember there was support, there was food and there was something, or rather someone, missing. I distinctly remember a blue cloth TAPS bag my mom used to carry 9/11 related documents; she probably still has it somewhere . . .

Returning To Taps to Help Others

I reconnected with TAPS years later in 2014, when I attended my first TAPS adult retreat in Austin, Texas. Though all of this was far outside my comfort zone, I decided an event strictly for surviving adult children would be a way to connect with people who understood what I was going through. TAPS offers gentle guidance to help people try something new on their grief journey; it is outside of our comfort zones where we find growth.

At this retreat I decided I wanted to serve as a Legacy Mentor, someone who once received the care of TAPS Military Mentors as a child in Good Grief Camp and now gives back and mentors other surviving children. The openness and encouragement of the other attendees and TAPS staff made my decision to come back as a Legacy Mentor an easy one. I felt it was a way for me to reconnect to my father’s military service.

As a Legacy Mentor, I have the opportunity to pass along my own experiences and knowledge to children and teens like me who lost a military loved one. As the years go by, I can see the growth in these young survivors as they continue on their own paths toward adulthood. I am amazed at the strength, resilience, and determination in TAPS children and hope I can foster those attributes in mentees for years to come. 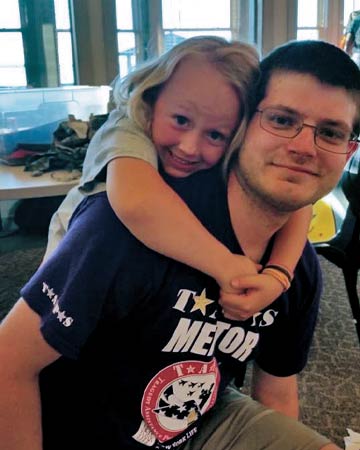 Robert Pycior as a Legacy Mentor

A Community Who Gets It

I have made friends from across the world who all have an ability to relate to my story of loss and resilience that others outside of TAPS just don’t share. As the Legacy Mentors continue to grow into adulthood, we are now becoming the leaders and facilitators of the very programming we benefited from as children and teens. My transition from mentee to Legacy Mentor to now Good Grief Camp Group Leader highlights a journey forward in life, not only with TAPS but also with the loss of my father.

Through TAPS, I have had the opportunity to network, learn about different careers, meet with successful individuals who have helped provide a direction for me, and better develop my skills as a helper. It is no small coincidence that I became a social worker. I continue to gain new insight from every TAPS event I take part in.

If anything can be gained from the loss of my father, it is knowing the monumental impact community and connection have in overcoming adversity. TAPS, as well as other organizations that highlight the importance of peer connections and community, allowed me to reconnect with people who share the experience of loss. The challenges we all face in life can either define us or be the driving force that brings us together and motivates us to move forward. 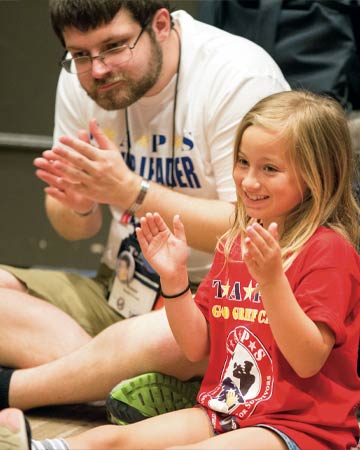 Robert Pycior as a Group Leader

Sharing Our Stories with The Leaders of Tomorrow

As we continue into the third decade since 9/11, I recognize life will forever be different than before — for our country and for me personally. The global nature of society today means we are able to experience a multitude of cultures, people and perspectives. But this reach isn’t always a good thing. Hate can spread quicker than fire; and the internet, social media, and new and emerging technologies can all be accessed by those who wish to do harm.

In looking to the future, I believe we should all focus on what we can do to connect with others by sharing our stories and keeping memories alive. We should look to educate children in a proactive manner, prepare them for the inevitability of loss and help them in their journey through life. The children of today are the leaders of tomorrow. We all need to give them the tools they will need to create success; just as TAPS has given to me and just as I plan to continue to give to others.