I am a mother to three incredible daughters, who have always given me more than I could ever give them. They are bright, kind, and funny. Since the day each of them was born, I’ve learned more about love than I can put into words. All their father or I ever wanted for them was the absolute best. Above all, we wanted what all parents want for their kids—that they feel safe. 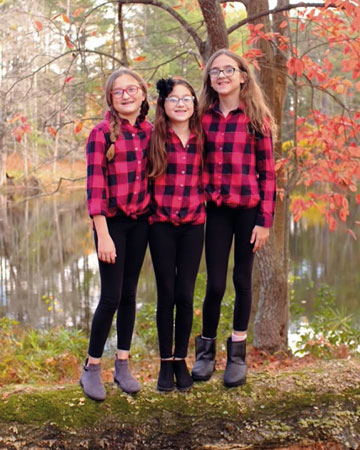 When their father, my husband, died suddenly as a result of suicide in May 2018, safe no longer felt possible. But to my surprise it was my children who would show me I was wrong.

I was devastated on the night my husband died. Traumatized from having found him. Lost. Despondent. Just sitting upright was hard. I still feel nauseated when I think back to those first few hours. The most overwhelming feeling was a deep-seated fear. I was afraid for myself and very afraid for my children.

The world now was scary and unpredictable. My high school sweetheart, the man I’d fallen in love with when I was 16, the man I adored and trusted more than anyone else in the world, had died violently and unexpectedly in our home while our daughters slept. The worst possible thing had happened, the thing I’d spent my entire marriage as a military spouse dreading: My husband was dead, and I was alone and defenseless. The worst part was waking my children to tell them their beloved father was gone. He was their hero, their whole world. I was terrified of what this was going to do to them.

In the weeks that followed, my fear gave way to a determination to protect them. First, I resorted to my most basic parenting instinct—being honest. Telling them the truth was hard, but it was the only way forward. My sweet daughters, who were only five, eight, and nine at the time, sought to comfort me. As a parent I felt guilt but also pride.

It shouldn’t be the children’s role to comfort their mother, so I pushed back a little and my fear took over again. I accompanied them to therapy. I signed them up for endless activities. Lego camp. Dance camp. Outdoor camp. I was desperate for normalcy. I wanted to manipulate our grief, do everything all at once to fix it. I wasn’t reflective or mindful. I was afraid.

In retrospect it was all a little much. I didn’t need to schedule every moment or watch my children for risk factors every minute of every day. My hypervigilance was counterproductive, but I was desperate.

A few months after our loss I took the kids to the TAPS National Military Suicide Survivor Seminar (NMSSS) in Florida. That is what helped most. My children were able to process their grief for the first time with other kids like them. They gained knowledge, language, and, most of all, confidence. They were better able to tell me what they wanted and needed. (It was not another summer camp.) 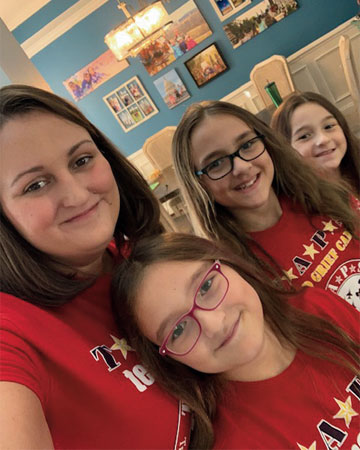 Amanda and her daughters (Lacey, Mollie, and Aimee) after participating in a virtual panel during the TAPS National Military Suicide Survivor Seminar in October 2020.

Early on, what my children craved most was connection, which is why TAPS has been so powerful for them. I craved connection, too. TAPS helped me recognize that my over-scheduling had left my daughters feeling overwhelmed and disconnected from me. It was hard to hear, but it made sense. There were plenty of days I didn’t want to talk endlessly about my feelings, days I certainly wouldn’t have been interested in activities like dancing. I was grateful for their candor, and for once I felt hope. Hope that we would be okay. My children were grieving, sure, but they were healing too. They were finding a way forward for themselves and our family.

After that first seminar, I got a lot better at listening. My girls did an amazing job opening up. They’ve accomplished a lot since then, and I’m privileged to have a front row seat. One of my proudest moments was when my older two girls – now 10 and 11 – participated in a panel at the 2020 TAPS Virtual National Military Suicide Survivor Seminar called “Ask the Experts.” They fielded very difficult questions from adults and children alike on what helped them find a path forward after loss. They expressed with clarity beyond their years that after a loss of this magnitude it’s not just the adults who are different people. The kids are, too. 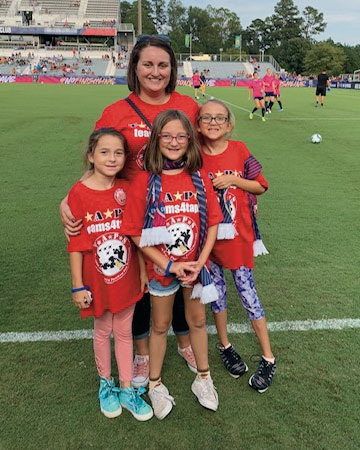 And it’s okay to be different after something like this! It’s okay to ask for space. It’s okay to get angry. It’s okay to be happy again, too. I watched my girls, who just a little over two years ago had been devastated on the floor of a hotel room when they learned of their father’s death, rise to the occasion in a way that would have seemed impossible then. The most important thing my daughters shared on the panel that day was that they are different now but not broken. They didn’t need to be fixed. It was a breath of fresh air for me, truly a revelation.

My children have shown me what it means to be a living legacy. They are resilient, like so many of their peers at TAPS. My daughters have shown me they are up to the challenge of profound loss and complicated grief. When given the space and permission to be honest, they do it and do it well. It’s been hard for me as a mom to watch them grow and know that I can’t always protect them from the world.

Still, watching them these past two years has given me hope. My children will be okay and therefore so will I. What we’ve been through is hard. It isn’t fair or deserved. But we can do more than just survive this loss; we can thrive and learn and grow as a result of our experiences, as they have, and we thankfully don’t have to do either alone. I hope I never forget to listen to and trust my kids and push them to do better not out of fear—but out of love. I wish for them the opportunity to continue to support others and show them there is hope after suicide loss.