In 2018, I visited the TAPS website and saw that registration for the Montana Men’s Retreat would be opening soon. I set the alarm on my phone and computer. If I did nothing else that year, I was going to do this. The second registration opened,

I signed up. When I received confirmation, I was beyond excited.

My excitement was a direct result of an encounter I had with Medal of Honor recipient Hershel “Woody” Williams.

In April 2018, I was invited to attend a Medal of Honor reunion event in Gainesville, Texas. I was with a group from the Living History program at the National Museum of the Pacific War. We learned the day of the event that Cpl. Williams was unable to attend. I did get to read about him from a display at the event, though, and learned how he had lived his life after World War II. As I read, I thought, I could take his name out and put mine in its place. I discussed this with the director of our group. He had contact information for Cpl. Williams and encouraged me to reach out. One of the first things I did when I got home was send a note to his grandson, his point of contact. In my note, I shared I was a retired Marine Gunny, how my experience mirrored Woody’s after WWII and how Woody’s story had made such an impression on me. 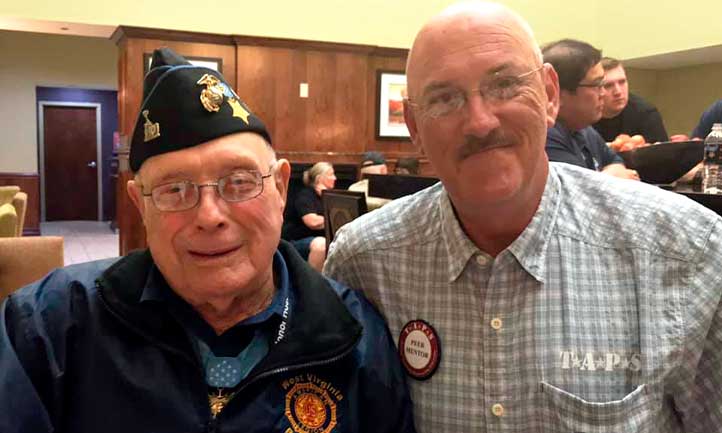 To my delight, I got a reply almost immediately sharing that Woody would like to speak to me the next day. I was in shock.

I called him not knowing what to expect. It’s not every day you get to speak with a Medal of Honor recipient. We talked about losing our buddies and about the loss of my son. We spoke for over an hour and, in that time, Woody offered encouragement that would make a significant difference in my life. I told him about losing my son, Christopher, back in 2005 and how I had initially connected with TAPS, but in my immediate grief had not gotten involved to any extent and lost touch. It was then that he told me to give TAPS a second chance. His words really got to me. It wasn’t so much what he said but the way he said it that touched me.

Back to my excitement at being able to attend the Montana Men’s Retreat. When I arrived, I wasn’t sure what to expect. I found everyone to be friendly and even a few of us had some things in common. I had never met the other survivors yet it was like we were old friends. At first, I was a bit reserved. It was our excursion to a lake where things truly changed for me.

We traveled by horseback to the lake. During our time there, we were asked to write a poem, letter, or just anything that came to mind. I started out writing “I am here.” I went on to acknowledge who I was there for – my son, Christopher. I began to feel I was talking to Christopher. As I wrote, 13 years of grief and pain came out with each word. The wall I had built around myself began to come down.

Something Woody had said hit home for me — we are hardest on ourselves. I felt a burden was lifted from my shoulders and my heart when I finished writing. I got up and walked toward the lake. Before that moment, I had been letting my grief dictate what happened in my life. Now I would be the one in control. I would determine how I was going to live my life.

Not long after my return from Montana, I got involved as much as I could in staying connected to my TAPS family. I attended the men’s video chats and I made the decision to attend the TAPS Southern Regional Seminar at Fort Hood, Texas. While a bit hesitant at first, I kept remembering my conversation with Woody and I decided to attend.

Every morning, I have coffee in my Montana Men’s Retreat mug as I start the day. I want to do as much as I can for TAPS. I have hosted several TAPS Togethers in my area and I want to do more.

In 2019, I went to Indiana for my 40-year high school reunion. While there, I visited my middle son, Nick. I shared with Nick my experience with TAPS and the Men’s Retreat. He didn’t seem interested in what I had to say. I had one of my TAPS friends, a surviving sibling, send Nick a Facebook message about TAPS in hopes he would think about becoming involved. She got him to sign up for the Kentucky Men’s Retreat!

The experience changed him in a positive way, just as Montana had done for me. He is regularly connecting with others on the men’s and sibling chats through the TAPS Online Community.

At the Montana Men’s Retreat, everyone in attendance had been given a special, custom engraved utility tool. It had the name, rank, dates of service, and other distinctions of our loved ones. I wasn’t able to bring mine home due to my limited luggage space but the tool was sent to me later. Once I had this memento of my time in Montana, I realized this tool wasn’t meant for me, it was meant for someone else. In talking with Nick, I wanted him to take the tool to my youngest son, Greg, who I had not spoken to in several years; and I wanted Nick to take this to Greg and talk with him during a visit around Christmas in 2019.

I had almost forgotten about it until one day after the new year, I got an unexpected text message. When I saw who it was from, I had to sit down. It was from Greg. We are now communicating and share texts and posts on Facebook all the time. Next time I am in Indiana, the Monroe men can get together — thanks to TAPS.

Going to Montana did more than help heal a wound in me, it healed a family. All of this because someone encouraged and convinced me to give things a second chance. The Montana Men’s Retreat was that chance.