Conquering the Distance – Honoring our Heroes

This could be a simple story of individuals who love to run, lacing up their sneakers and pounding the pavement in pursuit of a personal best time, wanting another finisher’s medal to add to their collection or channeling their energy into physical activity.

This could be a simple story. Yet this twenty-year journey is a story filled with passion, determination, reverence, love and a happenstance or two thrown in along the way. 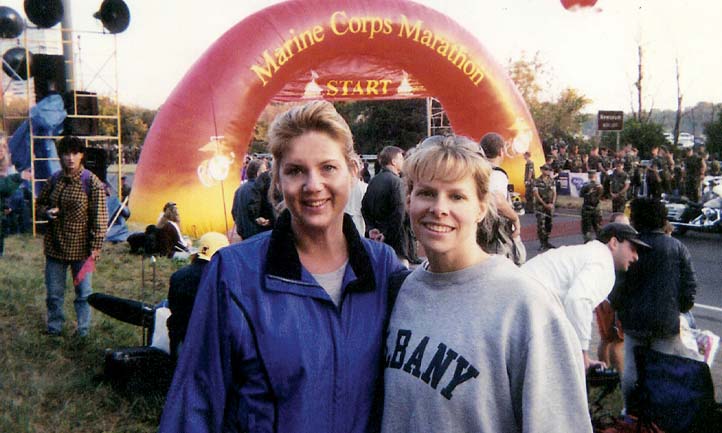 On a fall day, two surviving military widows, Marie Campbell and Lori (Hunter) Musselman joined each other to participate in the 25th Marine Corps Marathon.

They completed each step, each mile as a celebration of their heroes – their husbands who had served in the Air Force and Army respectively. Husbands who had given their lives in that service. These women also ran as a way to give back to the organization that had brought them together – the Tragedy Assistance Program for Survivors (TAPS). Sharing their love of running and using this event to raise funds for TAPS was a way to say thank you for the love, support and sense of hope each found after devastating personal heartache.

This was the beginning of Team TAPS…

“I knew the Marine Corps Marathon would be a special way to celebrate Dee’s life. However, I actually felt closest to him in the months leading up to the marathon as I trained. The day of the actual marathon, I knew I was doing it for him, but it was also for me. Through the entire 26.2 miles, and after I crossed the finish line, I felt a sense of empowerment, something I hadn’t felt in a long time.  I couldn’t wait to do it again the following year.” ~ Marie Campbell

“The road to the first TAPS marathon event started with a desire to honor my husband CW3 Dan Hunter. Marie and I started together and separated after the half-way mark with the promise that I would make it across the bridge before the deadline. It was a grueling event for me as I had not trained well and had a knee injury. I hit the wall at mile 17. I wanted to stop but couldn’t let myself quit on Dan, Marie, or TAPS. I finally crossed the finish line 5 1/2 hours later with tears streaming down my face. I was so proud of our journey and swore I would never do it again! Thankfully Marie picked up the baton and kept it going. I still run (5k to 13.1k races) for myself and in memory of others. The races allow me to push myself, channel my energy into something positive and every time I think of Marie and our first race! ~ Lori Hunter Musselman

Each participant in a Team TAPS event honors a service member. 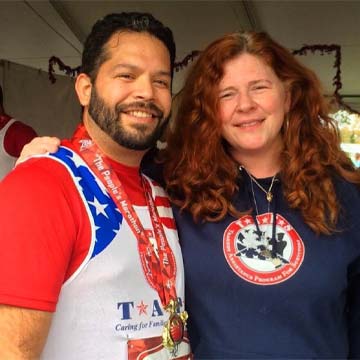 Tony Ochoa, a longtime supporter of TAPS began running with Team TAPS in 2015. In his initial contact he shared: “My father is retired Air Force and I grew up on military bases all over this country and parts of the world, so I have a large amount of pride for our military and this country.” Tony finds one of the most impactful aspects of his participation is getting to know the families. Through the Fallen Hero Match, he was connected to Mary Gallagher, a surviving spouse to run in honor of her husband, GySgt. James Gallagher, U.S. Marine Corps. Tony shares that his friendship with Mary has always been special. “I feel she invited me into her family. At the finish line, she gave me dog tags with her husband’s name on them. Getting to know the hero I’m running for through the family is always meaningful. The work of TAPS is so important and to be just a little part of it is an honor.”

Often, participation with Team TAPS transcends the event itself. Hearts can find peace and long held wishes, other than to cross a finish line, can be realized.  You never know when the race begins where the journey will take you. 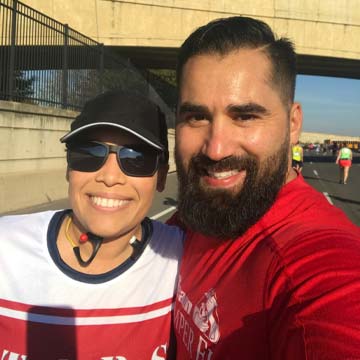 Patrice Sullivan, surviving significant other of Marine Corps veteran Sgt. Thomas Donaldson, had such an experience at the 2017 Marine Corps Marathon 10K race. “Tommy served in the Marines from 2000-2004 before he died by suicide in 2005. During my second MCM10K with TAPS in 2017, one of Tommy’s Marine battle buddies I had never met LITERALLY ran into me while I was running and said ‘how do you know the guy on your back?’ (Referring to my TAPS photo). I explained he was my boyfriend and the guy said ‘He was my sergeant.’ We hugged and cried and the guy said ‘I have been waiting 12 years to find you and pay my respects.’ We crossed the finish line together. The next year we all met at the MCM10K again I was able to introduce Tommy’s parents to two of his battle buddies!

This year we plan to all meet again and make it a tradition to honor and remember him.”

Team TAPS gives individuals a way to support the mission of TAPS. It also stands as a testament to the strength, pride and resilience of survivors. It is an example of the power of community and the spirit and determination of the human heart.

This story is more than running. It is more than challenging ourselves physically. It is a story of honor, of courage, of celebration.

It is a story of love. It is the story of Team TAPS. Moving memorials - placing one foot in front of the other, pushing beyond the “wall,” gaining strength. Remembering the Love - Celebrating the Life - Sharing the Journey.

Team TAPS isn’t just for those who like to run.  It’s also for those who like to cheer on participants or volunteer. Many survivors and friends come to be a part of the camaraderie and share in the spirit of events. Whether manning a water station, helping distribute memorial photos and singlets to participants or providing extra motivation along the race course, anyone – at any fitness level – can be a part of the uplifting and joyful atmosphere a Team TAPS event provides. 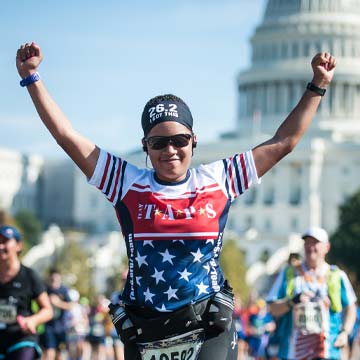 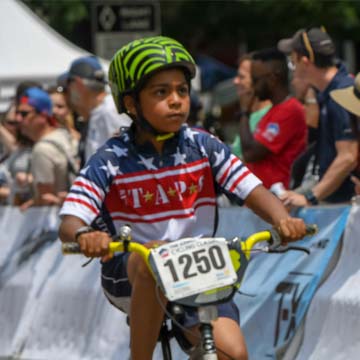 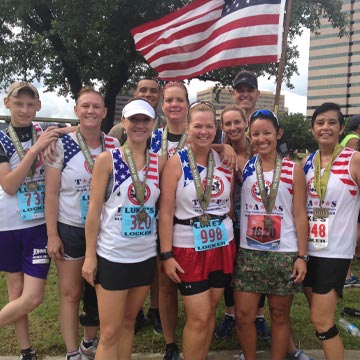 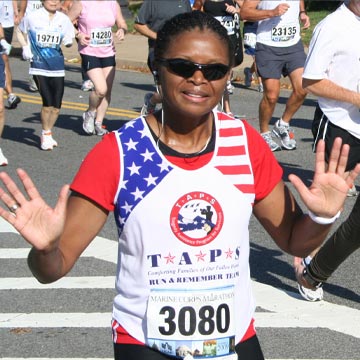 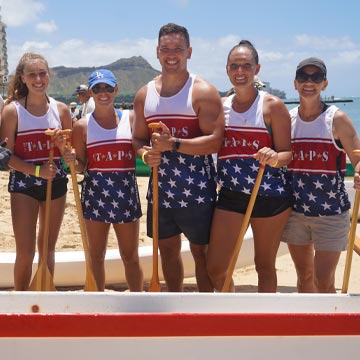 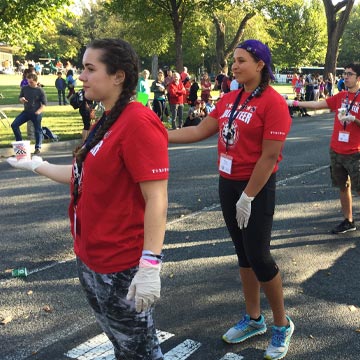 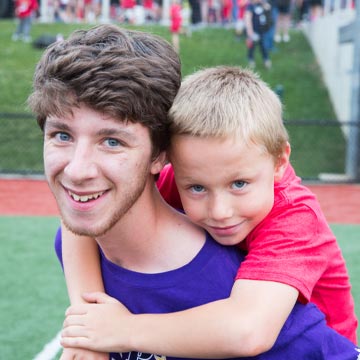 Wearing bib #1 – Tommy Horton, at age six, honored his father Major Robert L. Horton, U.S. Army (Ret.) by running in the 2004 Marine Corps Marathon Healthy Kids One-Mile Fun Run. Now a TAPS Legacy Mentor, Tommy serves as a companion to newly bereaved children at TAPS Good Grief Camps – where he found support for so many years. As a Legacy Mentor and participation in Team TAPS events, he continues to honor his father’s legacy of service to others. 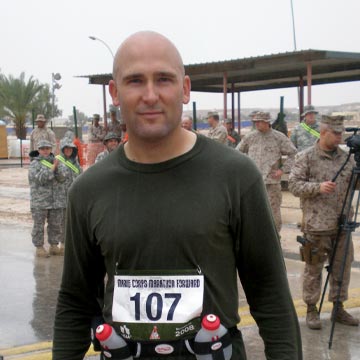 On October 26, 2008, service members prepared to run in the sands of Iraq to honor their fallen battle buddies. Marine Gunnery Sgt. Dustin Kazmar woke at 0400 to ready himself for what would turn out to be anything but a normal day. Unusually heavy rain had runners soaked from head to toe. Kazmar had completed 9.2 miles when word came that due to the conditions, the race was cancelled and everyone needed to return to the start/finish line. Dustin was disappointed – but not defeated. He said to himself, “There is no way I am not going to finish what I have started,” so after a short break, he set out on his own to finish – rain or no rain.

At mile 22 he thinks of, as he says “throwing in the towel.” He then begins to “think about our fallen warriors, all the people that have supported me in raising money for the TAPS organization, and what the organization stands for. I found the motivation I needed.”

And the Journey Continues…

"Thank you Team TAPS. This has been my dream to run in memory of my brother, Sgt. 1st Class Rich Henkes. He was the reason I began running. I may not run fast but I will finish for him." ~ Tamara Henkes

"Why do I run? I'd say it depends on the day. Some days it's really for a workout. Some days it’s my escape from reality, free therapy. Some days it’s for a break from working at home, staring at my computer screens. Every day, though, I run to remember! Forget mileage times, I go for memories per mile." ~ Jamie Sienko

To find out how you can participate or be matched with a runner to honor your hero, visit Team TAPS or email teamtaps@taps.org.