There is no loss like that of a child whose life was cut short.

My son Cherone’s death was devastating to our family. He chose to follow in his dad’s footsteps and join the U.S. Navy. Immediately following his death in the attack on the USS Cole, there was nothing but pain in our hearts. The only thing that sustained us at that time was our family and friends as well as all the memories of his 22 years with us.  We are not supposed to outlive our children and the death of a child creates a huge hole in the family.

When the USS Cole was attacked on October 12, 2000, our country was not at war.  It was a surprise attack and it wasn’t really connected to terrorism. Then almost ​one year later, thousands of Americans were feeling like we were when those planes were hijacked, and ​our country was attacked in ​ New York, Virginia, and Pennsylvania.  We re-lived October 12, 2000, on September 11, 2001. 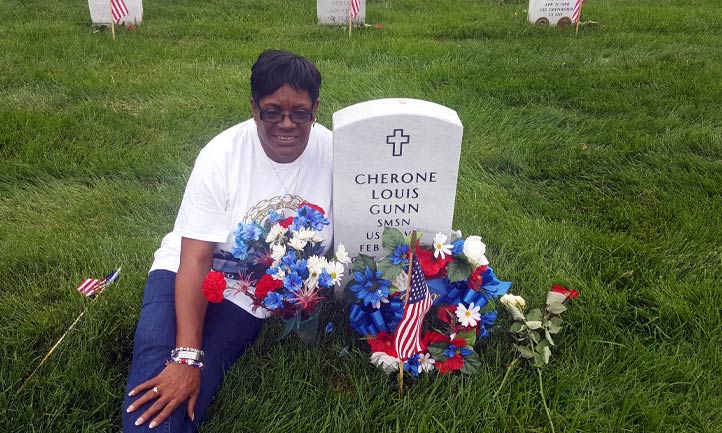 Four years after Cherone’s death I heard about American Gold Star Mothers. Joining them brought a level of comfort because I saw that there were other mothers who knew how the USS Cole moms were feeling. We all suffered through the death of our children while serving in the military. My husband worked as a readjustment counselor at the Veterans Affairs Vet Centers when Cherone was killed and he was sustained by supporting the 16 families.  He stood out as the spokesperson whenever anything about the USS Cole was in the news and he was always there to speak up for what happened to those 17 sailors asking that there be justice for the loss of their lives.

I often say that the Lord prepared me for the death of my husband by taking back my child first. Lou was diagnosed with lung cancer in September 2015 and with my faith and hope, I expected him to beat that disease like so many others. Unfortunately, within five months, he was gone. God knew that the month of February changed for us after October 2000 because Cherone was born on Valentine’s Day. I guess He said, “I may as well take your husband this month.” My husband joined our son on February 21, 2016.

Both my husband and I knew we had to learn how to move forward and honor our son’s service. My husband served 21 years in the military and decided to honor our son by becoming an advocate for his fellow veterans as a member of the American Legion and Disabled American Veterans. I chose to mirror his service when I initiated chartering a chapter of American Gold Star Mothers, Inc. (AGSM) in the Hampton Roads area.

In June 2019, I accepted the honor of being named National President of American Gold Star Mothers, Inc. The biggest driving force behind my advocacy work has been educating the general public about the meaning of Gold Star. Even though my father was a WWII disabled veteran and my uncle had a son who died while he was in the U.S. Marine Corps, my family knew nothing about Gold Star and my uncle was a Gold Star Dad.

I also often say not every service member who dies on active duty has a spouse or a child, but they all have a mother and father.  American Gold Star Mothers, Inc. was founded by a mother in 1928 who said, “Self-contained grief is self-destructive.” It is a journey none of us wanted. It is important to me that everyone understands that this is an organization of mothers, fathers, siblings, and grandparents who keep alive the memory of their loved one by doing for others in their communities.  Many of our members volunteer in their local VA Medical Centers where our organization has input on decisions that impact veterans. This is what our founder did 92 years ago and her legacy continues.

My son was one of 17 sailors killed, so my husband and I immediately had a connection with 16 other families. Twenty years later we are still connected and communicate with each other as families on a regular basis. We have a bond like no other because we all felt the deep hurt of losing a son, daughter, spouse, father, mother, and sibling. Many of us return each year to the Remembrance Ceremony to hear the names read and the bell rang for each sailor. Connecting with others who are going through a military loss, enables you to always have someone who understands how you are feeling. No one know​s​ how you feel with that void or hole in your heart like another who has that same hole in their heart. You connect immediately with a hug, clasped hand, linked arm, and tears from the same kind of hurt. You know you are not alone.

Organizations like American Gold Star Mothers and TAPS carry forward the important message that we are unique in our missions yet we serve the same group of people – military survivors. When we collaborate and support each other, whatever military survivors need to sustain themselves can be fulfilled. This journey we are on has its high points and low points but with the support of others, we learn that we can move forward. The goal of moving on is never to get over it but learning how to move forward with support when needed, honoring the service and sacrifice of our military heroes. 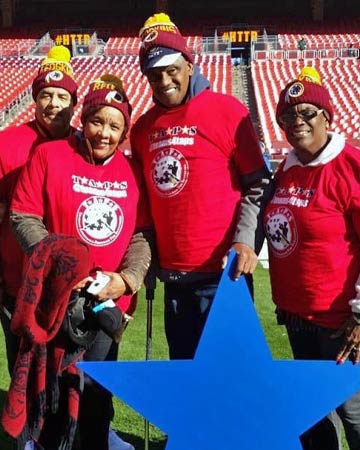 I was notified of a team4taps event to attend the Saints vs. Redskins game at FedEx Field. We invited Cherone’s Godparents because my husband’s long-term friend was a Redskins fan. It was September 2015 when my husband was diagnosed with lung cancer and he had his first chemo treatment the week before we attended the Salute to Service game on November 15. He was very weak and wasn’t up to a lot of walking but made it out to the field for the pregame where Lee Greenwood sang, “Proud to Be an American.” After the USS Cole attack, I was so broken, I could not listen to that song and would turn off the radio when I heard it being played. However, I felt proud to be standing on the field with the other 49 families surrounded by our close friends and I made it through without a teardrop. Fifteen years later - progress was being made on my grief journey.