Transcending Borders Through Honor and Love

In mid-January, the city of Dnipro in eastern Ukraine felt festive. Walking along the snow-packed boulevards, storefronts played American Christmas music, cafes were busy, and an outdoor ice skating rink lit up the city block. As a first-time observer, you would hardly know that the frontline of Russia’s ongoing proxy war in Ukraine was only a two-hour drive away.

“The Ukrainian flag is our symbol of hope and freedom,” said our interpreter, Olha Prus, as she led our group of TAPS International delegates and Ukrainian military survivors toward a solemn reminder of the war’s toll: a memorial called Remembrance Alley to the Deceased Heroes of the Revolution of Dignity and Anti-Terrorist Operation (ATO). The mothers of deceased heroes, as they are referred to in Ukraine, came together with veteran ATO fighters and the Dnipro community to create the memorial — even while the shelling east of the city continued.

More than 13,000 Ukrainians have been killed in the conflict, a quarter of them civilians, and more than 30,000 wounded in the war in eastern Ukraine since the fighting broke out in April 2014, according to a United Nations Human Rights report released this year.

TAPS International was there to help government officials establish an organization of their own, one that would be modeled after TAPS and called TAPS Ukraine. Through TAPS International, a global family of all those grieving the death of a military loved one is being created to honor the men and women who have died in the defense of freedom. All of this while forming partnerships around the world — essentially, to care for one another as a global community and grieve and grow as a global family.

Our small delegation walked across the snow-covered park toward the memorial. As I walked arm-in-arm alongside Ukrainian war widows and young mothers, mothers of deceased soldiers, and women who had volunteered in the war effort, I thought about how war reverberates through the generations. 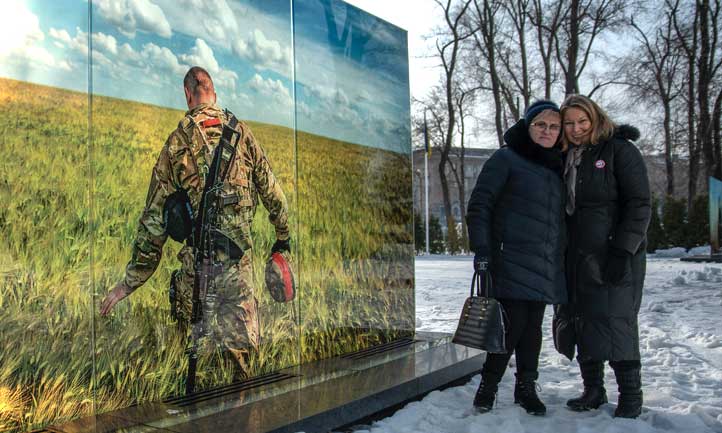 My own father, a Marine, was killed in the Vietnam War hours after I was born. In 1970, my mother was notified in the maternity ward. Suddenly, she had a newborn and my older sister, an almost 4-year-old, to care for on her own. At that time, there were no support groups such as TAPS in place to help thousands of grieving military families like my own.

Many years later, I grew to know that in sharing our stories with one another, we gain a powerful perspective: hope.

In 1997, my mother, sister and I traveled to Vietnam and met with women and children of that war. We wanted to know Vietnam as more than just a war, but as a people. In sharing with Vietnamese widows and their grown children who lived through the conflict, we learned that loss, healing and love truly transcend borders.

At first glance the Ukrainian memorial was a poignant public art display. Our group walked toward several billboard-sized photographs set in thick glass that emerged freestanding in the snow. The imposing images depicted the war and reflected the afternoon sunlight, as if to take on a mood of their own. “After our independence from the Soviet Union in 1991,” our interpreter explained, “we reversed the colors of our flag—blue is on top and symbolizes the sky, and yellow symbolizes Ukraine’s wheat fields.”

A grieving mother whose son died fighting for Ukraine reached for Bonnie Carroll’s hand as they stood together in the cold air in front of a large glass image of a soldier. Symbolizing the flag, the image reminded the woman of her son — a reflection of Ukrainian identity, a soldier walking through a yellow wheat field under a bright-blue sky, holding out his hand to touch the stalks of the breadbasket of Europe, as Ukraine is known.

The mother did not want her son go to war, but nevertheless, like many young people who stepped up to defend their country, she said her son went anyway. Her grief was palpable when she explained that her other adult son, who had no outlet to express his sorrow for his brother, died of a heart attack 40 days after his brother was killed in battle. She believed the burden of his grief was simply too much to endure, alone.

Across the frozen park, Tetyana Khorolska held a long-stemmed red rose as she walked toward a panel that held pictures of the fallen who had served in her husband’s division: Dnipro 1, a battalion of volunteers early in the war. “My husband’s nickname in the Army would translate in English as ‘too Ukrainian.’ Anton loved his fellow Ukrainians.”

Many of those first volunteers who joined Dnipro 1 did not have military experience, and most of them were friends and neighbors to Tetyana. She helped organize funerals for 25 of the men who were killed in her husband’s battalion. “The men of Dnipro 1 are like my family,” she said. Tetyana touched her fingertips to her husband’s picture behind the glass. He was killed in 2014. She set the rose at the base of the memorial that reads, “Heroes Never Die.“

Tetyana’s two children took the news very differently. Her son, who is 13 years old, is only now able to acknowledge that his father is dead. It wasn’t until he went on an organized trip with children who had lost parents, just like him, that Tetyana said he finally accepted that his father had died in the war, too.

Tetyana’s daughter, 17-year-old Daria, said it was her mother’s strong will that kept her going. “At first, I couldn’t concentrate in school and it was hard for me to control my emotions. I struggled to pull myself together.” Daria showed me a picture of her father and pointed out that she has his eyes. She smiled and said she also shared his sense of humor. “I was tending my father’s gravesite with my mother, and my father loved McDonald’s coffee, so we brought him a cup while we visited.”

Her mother added, “Anton used to drink coffee and have a cigarette first thing, and he adored chocolate. So we brought all of this, I lit a cigarette for him while we were there together.”

As a mother and a widow, Tetyana knew early on that she faced two choices: “I could drown in my own grief, or try and live further and help others.”

In leading TAPS Ukraine, that is exactly what Tetyana and so many other volunteers in Dnipro are doing. By bringing together families who are touched by the ongoing conflict, there is hope. 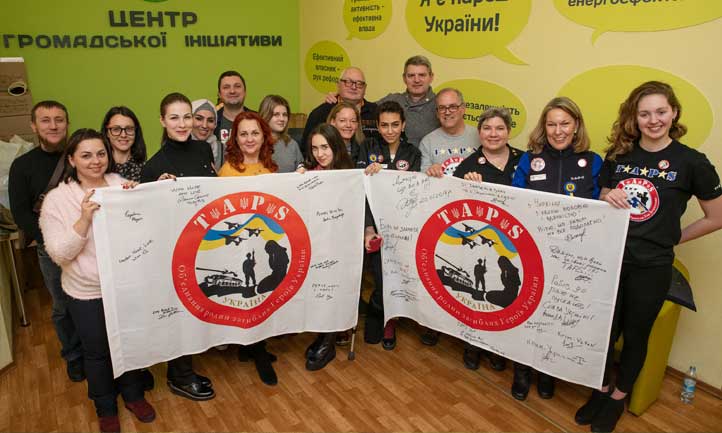 A 10-year-old boy named Maksym told me he had never talked to another child about losing his father to war. At school, he was the only child whose father had been killed. As he sat next to his mother at a TAPS Ukraine gathering, feet dangling in an oversized chair, he struggled to hold back his tears. He wanted to share his one hope for other children: “I wish for good for my generation, and I hope with all my heart that no other child will lose their moms and dads.”

The boy adjusted himself in his chair and looked over expectantly toward his mother. She smiled at him through her own tears, as if her son had just taken a first step.

Mitty Mirrer is the surviving daughter of Captain William A. Griffis, III, U.S. Marine Corps. She is a graduate of the Columbia graduate school of Journalism and the producer and director of a documentary, "Gold Star Children."