Sharing Music, A Message, and Finding an Open Forum to Heal 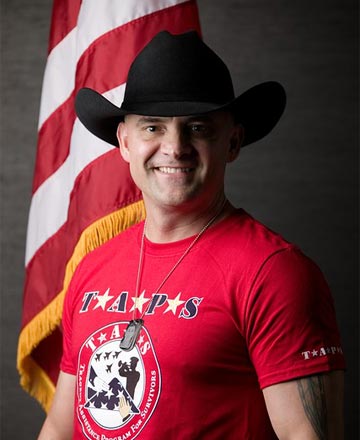 Have you ever walked in to a room since you’ve lost your loved one and felt that anyone, much less everyone, really grasped how much you’ve been through? How many times have you felt strongly, if not more, for someone else’s loss that you focused on their loss as much as your own, even if for a second? Can you remember the last time the heart of the person hugging you knew what it feels like to beat while broken just as much as yours, and it actually made you smile?

If you haven’t experienced these things I’ve mentioned, they may seem all but impossible. Some might feel those experiences may somehow take away from how much their lost loved one meant to them. After all, I remember saying to myself, “I can’t allow myself to hurt less because I don’t want to feel as if I loved (my brothers) any less.”

We all have felt sympathy from people who care about our losses, but only a small percentage of the U.S. population has served in the military, and we all know how difficult it is to find someone outside of that group to truly understand. Imagine a world where you don’t have to search for an empathetic heart. How amazing that would be, right?

As a country music artist, I have spent the last 13+ years selling myself to an audience. I’ve performed in front of crowds of 2 people to over 40,000 in the biggest arenas across the nation. Those aren’t bragging rights; that is my reality. To me, those two people were just as important as the large crowds. The 1% of on-stage concert glitz and glamour is built from the other 99 percent of my time trying to get people, who for the most part have no realistic idea what truly drives me, to actually care about my music and message. Ironically, when I’m on stage I spend the last 1% of my time still trying to get the audience to care about my music and message. For the first time in 13 years in Arlington, Virginia, I stood on stage singing my songs without needing an explanation to get my point across. Thirteen years.

I can’t count the number of interviews I’ve done wondering if people listening would see my world clearly as I talked about my time in service, in combat, and the moments I’ve spent with and without my brothers. There have been so many conversations with patriotic supporters about what it meant to lose my brothers only to leave their company feeling like they had absolutely no understanding. After all, how could they?

With a total of 20 years, 8 months and 7 days as an active duty military intelligence analyst turned chief warrant officer, and Black Hawk aviator, I served along side so many great people. This included my two brothers, Aaron and Steve, my brother-in-law, Randy (all fellow Army aviators) and my sister, Regina, in the Air Force. Sacrifice was not foreign to our family, as we all spent time deployed overseas in the fight against terror.

Unfortunately, just like most of you reading this, we experienced the ultimate sacrifice that completely turned our worlds upside down. If stories from other survivors are tough to bear, please skip down a couple of paragraphs now. However, in order to truly touch your heart, I felt I needed to add what happened to our family. I’ve always promised myself when given a stage or a platform to speak I would continue talking about my brothers. I believe in keeping promises.

My brother Aaron was a non-deployable cancer survivor who was in Iraq on a waiver he personally requested that was contingent on in-theater bi-monthly blood screenings to monitor his cancer status. On January 8, 2004, as a passenger in a medevac helicopter on the way to one of those screenings, he was killed in action when an enemy combatant shot it out of the sky with a shoulder-fired surface-to-air-missile. I was also deployed in Iraq and flew my last mission, and for the last time ever in a Black Hawk, that very same day. In a twist of fate, I was scheduled to fly over that very spot just a few days before when my battalion commander made me change my flight plan, and I took a different route. I live gratefully with that memory every single time I open my eyes in the morning and in my dreams at night.

As tough and rare as one loss is, and such a sudden loss already bringing pain down so mercilessly on our family, on December 17, 2013, my brother-in-law, Randy Billings, was piloting a Black Hawk in Afghanistan when it too was taken out of the sky. All but one passenger on board were killed, making us a two-time Gold Star Family. Being a recipient family to a military funeral was horrible. Two military funerals were indescribably yet ironically surreal. Knowing there were others who could grasp the gravity of our losses was unimaginable. 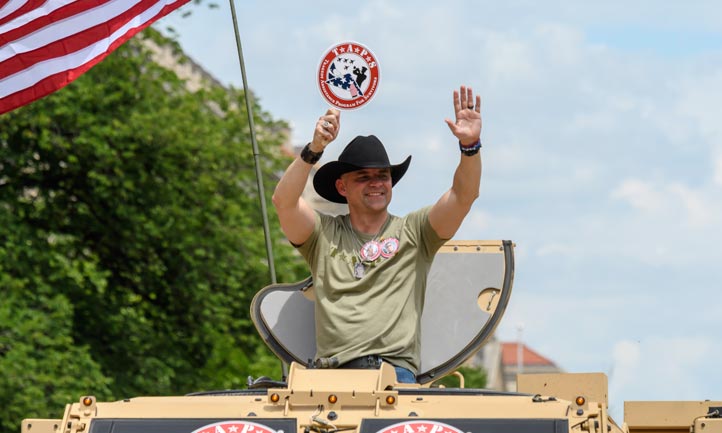 Ryan participating in the 2019 Memorial Day Parade with TAPS families. 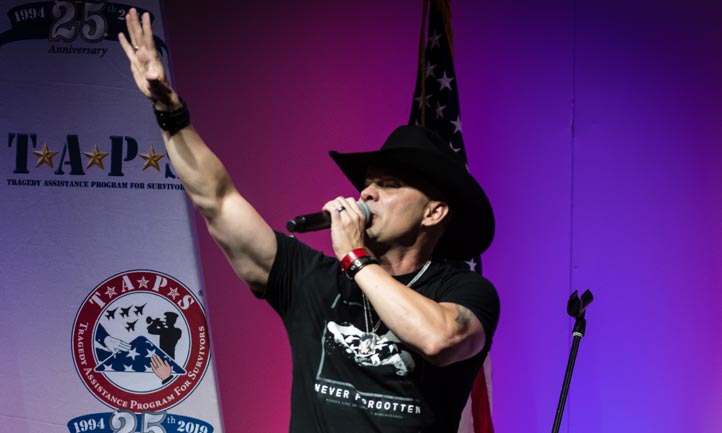 Ryan performing at the TAPS National Military Seminar in 2019.

I didn’t know what TAPS was really about until I walked uncomfortably, and apprehensively, into a room with hundreds of survivors just like me. Standing in the back of the room watching others, survivor after survivor passed by me with a warm, welcoming smile. Knowing who was in the room, I immediately felt a sense of belonging in a completely different way than before. Even then, I was still somewhat closed off.

As the weekend progressed, I established more and more relationships with fellow survivors with so many stories. The commonality, ironically a positive thing, was our losses. Despite my very personal knowledge and feelings about my losses, I found those connections actually opened my heart (in an incredibly healing way) to understanding more, and listening more, about others as they spoke passionately about their loved ones. Then something amazing happened: I began to know I was not alone.

This is where not knowing what you don’t know comes in to play. Many of us know there are people and programs that can help, and we may even know what those programs are about. Sometimes it takes a strong dose of good reality to show us what we have been missing in our lives because we were hesitant to open ourselves up to healing.

Sure, I knew there were others out there like me, but I never really knew in my heart that I was not alone in my losses. Survivors of all types — combat loss, suicide, accidents to toxic exposure (something I never really even thought about) — all told me their stories, and as much as I thought for years that hearing these stories would make my loss feel worse, they did just the opposite. These vulnerable, yet genuine moments made me want to share my stories more openly without worry of judgment or lack of understanding. For one of the few times, with exception to speaking with other surviving families in my country music journey, I found an open forum to heal.

There are many different sides to my personality, and those close to me know I’m not very good in crowds unless I’m “on” as an artist. Public situations as an artist are easy for me, but if I am in a crowd of strangers in personal situations, I become extremely anxious. In this circumstance I only knew a couple of people personally, but I felt a sense of calm I couldn’t explain, yet gladly welcomed. Familiarity on a completely different level was something I didn’t know I was missing, and I found it in a place that, for many years, caused anxiety. Once again, you don’t know what you don’t know.

“So I take the pain, and I push it down, even though it hurts like the day I found out you were gone,” are lyrics to part of the chorus in my song "What You Think of Me." We all have done it for our own reasons, and we all deal with our losses differently. We all want to feel both understood and that we are not alone. Knowing there is a place you can go for understanding and support, even if you don’t know what type of support you need, is a life-changing experience. It was for me.

I didn’t know such a strong healing power existed before my weekend with TAPS. Now I know there’s a place where all survivors can go to heal by openly, without reservation, spending time with other survivors. The hugs — every hug — are priceless, even when you don’t know you need one. After 13 years, I finally sang my heart out knowing it was protected by those who felt the same. You can too.

Ryan Weaver is a high-energy, all-American, rockin’ country music artist who proudly served as an active duty Black Hawk aviator, chief warrant officer 3 in the U..S Army. Weaver began his music career in 2005 while still on active duty, playing the club and festival circuit throughout the southeast. His performances are known for their unique blend of high-octane original songs and rockin’ cover material combined with a heartfelt message and genuine humor. Find out more about Ryan and his music.