After the death in June of Tyler Skaggs, a starting pitcher for the Los Angeles Angels, team manager Brad Ausmus talked about what it’s like to play baseball when a teammate suddenly dies.

“Once the game starts, it’s actually a refuge because it takes your mind off it, distracts you for a little while,” he said. “When you go back to your hotel room, you’re reminded of reality.” He was referring to the death of a teammate 17 years earlier, and he was faced with the identical feeling about losing Skaggs. He needed to go on managing his grieving players while dealing with his own sadness.

This interview so vividly reminded me of my own experience from 2014. My husband, Scott, died that July in an unexpected drowning accident. After the kids and I returned home to Virginia in early August after having buried Scott in California, we watched the Nationals play every night they were on TV that season, until their last game in early October. I found such refuge in watching these games, whether the Nationals were winning or losing, because I was able to escape from my reality of not having Scott on earth. With a beer in my hand, I just fixated on each ball thrown, each play made, almost in a state of trance.

I still clearly remember feeling extremely panicked when that season was over. I thought, “Oh no, how do I endure the long, bewitching evening hours alone now?”

I still feel a sensation of slight panic every time a baseball season ends. Of course that sensation is far less intense, but I always think, “Oh, now what?” when October comes around.

I remember all the players on the Nationals roster in 2014, and whenever I see those players on TV, even for a rival team, I feel drawn to them in a sad and nostalgic way.

That winter after Scott died was brutal. We had multiple snowstorms in Virginia of rare intensity and length, and I remember that as one of the darkest and the longest of winters I have ever endured. Or, maybe it was a typical Virginia winter but felt more dreadful to me because I was in the deep trenches of grieving the loss of my love. I remember often wishing for a baseball game on TV during that winter.

As spring 2015 arrived, teams4taps offered to take us to a Nationals game, where we could spend time with other TAPS families who knew exactly what we were going through. Although it made us long for Scott, it helped us feel that it was OK to be excited and happy again. 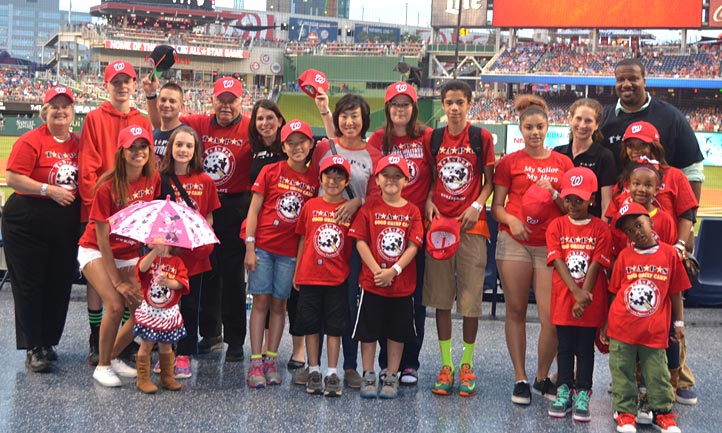 Soo Kim, center, who lost her husband in July 2014, enjoyed a 2015 Washington Nationals game with her children, Annelise and Elliott, along with other survivors and the teams4taps staff.

Spending time with other surviving families was a huge gift to us, whether at a game, a TAPS Care Group, or at the National Military Survivor Seminar and Good Grief Camp. These events helped us feel strength and hope as we connected with other TAPS families. They gave us much-needed relief from the burden of our new reality and allowed us to feel a sense of pure joy despite the loss of our beloved Scott. This was an important affirmation we desperately needed especially during that first year.

Later that summer, we moved to Northern California to be near family and where we had buried Scott.

I am probably always going to be a Nationals fan. I still watch most of their games, at least a few innings on my phone before I go to sleep. I feel indebted to them for providing me with an incredible break from the exhausting grief during those first few months after losing Scott. I am thankful that baseball was there as my refuge.

teams4taps is one way TAPS has helped us stay connected in our new home on the West Coast, where we got to see the San Francisco Giants and the Oakland A’s play each other in the Battle of the Bay game. Most importantly, these games have allowed us an extra special time to honor and remember our Scott, who loved cheering on his favorite teams. 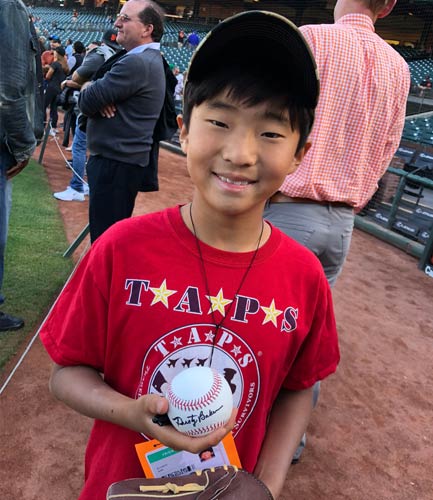 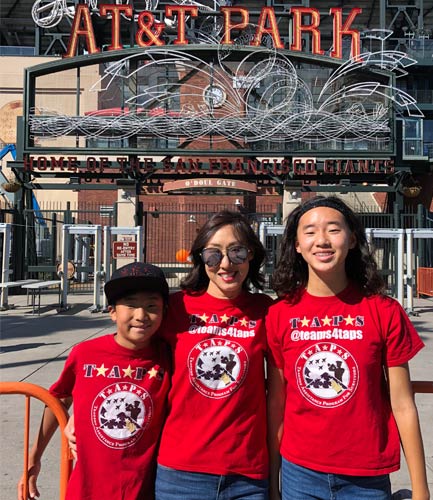 Since moving to Northern California, Soo and her children continue to find comfort in baseball and had the opportunity to honor Scott in 2018 during a game at the San Francisco Giants' AT&T Park.

In July, Patrick Corbin pitched fiercely for the Nationals while wearing the No. 45 to honor his good friend Skaggs. I wonder if Corbin found solace in the game as he mourned the loss of his friend.

My wish for all survivors is that we find moments of refuge in the things God bestows on us as we walk through this arduous life’s journey.