Coleen’s husband was a devoted soldier. He deployed twice to Iraq between 2004 and 2008. He never failed a PT test and never went on sick call for his first 20 years of service in the Army. In March 2011, he passed his “over 40 physical” and received a clean bill of health. On the day of his exam, he told his civilian doctor he had not been feeling well and was experiencing flu-like symptoms. The doctor ran a few tests and prescribed Tamiflu. When he couldn’t shake the symptoms, he went back to the same doctor and was told he had Lyme disease, for which he was treated with antibiotics. By mid-May that year, his health still had not improved and he had started to have severe night sweats. On June 11,  2011, he went to the hospital at Fort Bliss and insisted the doctors give him a proper diagnosis. Three days later, he was told he had cancer. It took some time for the doctors to locate where the cancer had originated, as it had since spread throughout his body - his lungs solid black and riddled with nodules. On June 14, 2011, he was diagnosed with non-operable stage IV cholangiocarcinoma, also known as bile duct cancer. Only 6,000 cases of the cancer are diagnosed yearly in the United States. Doctors did genetic testing and determined that his cancer had no genetic link and was instead the result of environmental factors, most likely the toxins he was exposed to in Iraq. After a 19-month battle, He passed away at his home on January 13, 2013 with his family by his side. His widow, Coleen, has since discovered that nearly a third of his platoon from his first deployment in 2004 has suffered from serious illnesses, including cancers.

Coleen’s story is not isolated. Similar experiences are shared by many of the over 10,000 illness loss survivors who have connected with TAPS since 2008. Of these, over 1,400 family members have self-identified as experiencing a toxic exposure-related loss. Many others may be unaware that their loved ones illness could be linked to toxic exposure. 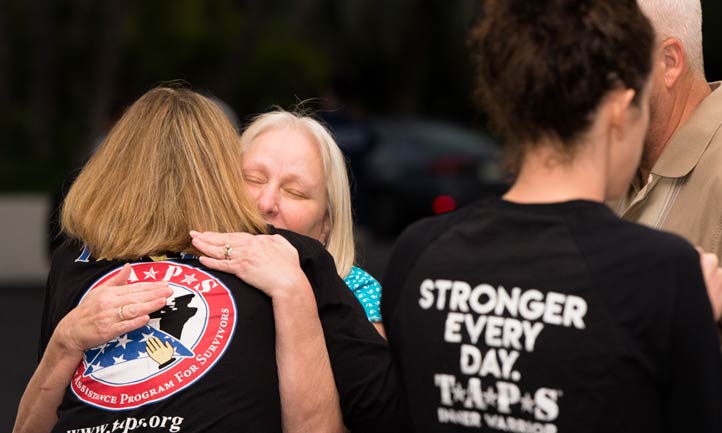 What is toxic exposure? Toxic exposure refers to service members’ contact with any number of environmental hazards they may encounter in the course of their military duties. In the post-9/11 era, it is estimated that as many as 3 million American service members may have been exposed to dangerous toxins during their deployments overseas.

What are Burn Pits?

Burn pits are open-air burning sites that U.S. military has historically used to dispose of trash in deployment areas. A wide range of refuse can be burned in pits including:

Service members exposed to toxic chemicals while deployed have returned home and been diagnosed with rare and aggressive cancers and other illnesses thought to be related to their exposure. Robust independent research is needed to establish conditions associated with each type of toxic exposure and best treatment options.

Susan’s daughter was an Army mental health specialist deployed to Iraq between 2005 and 2006, and again in 2008. In 2009, she was discharged after she became pregnant. After giving birth to her daughter, she developed a persistent rash, muscle weakness and joint pain. She was tested for Lyme disease, and was later diagnosed with fibromyalgia. She also suffered from severe stomach issues and was told she had chronic kidney disease and elevated liver enzymes. After having her gallbladder removed, she continued having one health issue after another. She was evaluated by the VA and rated at 100 percent disability. In 2016, she had a stroke and was told she had a large blood clot on her brain. Scans also showed a nodule on her lung. She died on April 27, 2017 at the age of 35. Her cause of death was marked as liver and kidney failure.

TAPS is leading the way in developing and curating a library of legislation, medical studies, literature, reports, and other media and research relevant to the issue of toxic exposure in the military. The library will help TAPS educate the public and policymakers about the needs of families whose loved ones died of toxic exposure-related illness. It will also help TAPS educate the medical community and surviving military families about the causes and conditions associated with exposure-related illnesses.

It is a primary goal of the TAPS toxic exposure initiative to ensure that surviving families have access to all survivor benefits earned through the service of their loved one. The focus of the initiative is toxic exposure in the post-9/11 military. In partnership with Wounded Warrior Project and TAPS, Vietnam Veterans of America is also contributing knowledge, experience, resources, and networks developed through their work to understand illnesses related to Agent Orange exposure.

Jennifer’s husband was a chaplain deployed to Afghanistan for nearly a year in 2008-2009. When he returned home, he had a horrible cough that would not go away. In June 2016, he was diagnosed with stage IV ALK-positive lung cancer, a non-smokers’ variety. His doctor affirmed that the cancer was likely the result of toxic exposure. Jennifer’s husband was treated in a civilian hospital with a targeted therapy that quickly killed his tumors and put him into remission. The cancer returned, however, and became very aggressive. Jennifer’s husband died on Christmas Eve 2016 at 52 years old.

TAPS is working to provide all families who have lost military loved ones to illness with information to help them determine whether the illness may have been exposure-related. TAPS is dedicated to providing the most effective and supportive care for all who lost their military loved one regardless of the manner of death.

If you lost your military loved one due to an illness, we would like to help you have your voice heard. Contact us at info@taps.org for more information.