A Father's Journey to Healing and Helping Others

I believe we are faced with choices along our journey. Some of those choices can help us heal while others tend to slow our progress and deflate our hope of ever getting to a safe place in our journey. A common thread among the men with who I have come in contact is that we were raised to be the strong, stoic presence. We were encouraged to help everyone else before thinking about ourselves.

What I have learned however is that you have to take care of yourself in order to be a solid source of support to another. Similar to the familiar instructions given during airline safety briefings – the oxygen mask needs to be applied to yourself before assisting others. I have grown to have a more keen awareness and appreciation of the metaphor as it applies to the extension of support to another in any circumstance. 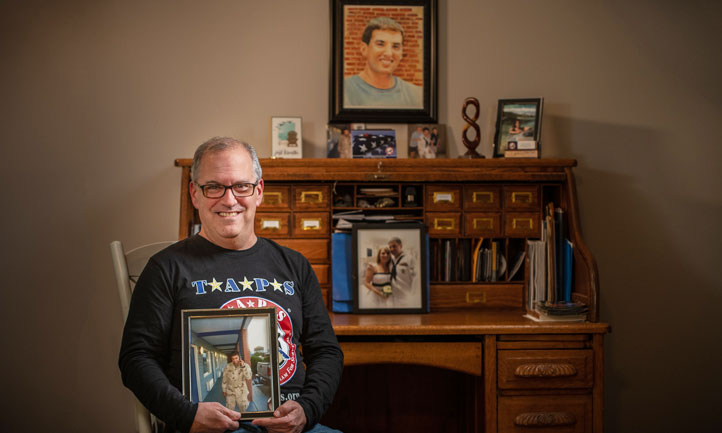 I knew very little about grief when my oldest son, Joshua died by suicide in March 2011.  He was a proud Navy sailor who seemingly had everything to live for but wasn’t able to see the sun through the clouds in his head.  His mother had just died from a 3-year battle with cancer and he was not able to figure out how he could ever recover from such a devastating loss.  He had been abusing opioids and turned to heroin after her death. He lost all hope of a future worth living.

His suicide set my life on a path I never would’ve imagined prior to this tragedy.  My heart had been ripped open and my life seemed all but shattered. Could I do what he did?  I thought about it, but quickly realized that I had much more to do in my life.

My path to hope and healing started with my call to TAPS and I was connected with a Survivor Care Team Advocate.  They referred me to grief counseling at the local Vet Center. These two encounters saved my life. I found connecting with others who understood gave me hope. They walked this difficult journey with me as I found my way out of the wilderness.

My counselor helped take off the ‘victim mask’ I wore so proudly, and focus on finding healing through the pain. She carefully guided me, allowing me to make conscious decisions. One of those decisions was to not medicate, as I felt I would only be numbing the natural feelings brought on by grief. For me, this was the best decision for my personal journey. It helped me to move more fluidly through the challenges of the journey I was thrust into traveling.

Becoming involved with TAPS gave me the encouragement I needed to talk about Joshua and talk about my grief.  Initially, this felt very strange, as I was not one to discuss my thoughts and feelings openly with anyone outside my tiny circle.  With the support of many in TAPS I stepped out of my comfort zone and told my story to anyone who would listen. Finding this strength to share enabled my healing to take flight, and over time the darkness turned to light.

As I ventured more into the light, I wanted to find ways I could honor Joshua and help others who have had to endure the pain of loss. Unexpectedly, I was given an amazing opportunity to be a part of the supportive mission of TAPS. In my work as a member of the TAPS Survivor Care Team, I have learned my story is very similar to many of the male survivors who are lost and just need a little encouragement and guidance into the healthiest ways to grieve. With men often feeling the need to be strong and stoic, it is easy to ask - do men actually grieve?  Of course they do.  Do we all do it the same way? No. We each grieve on our own terms and within our own time frames.

TAPS offers men varied forums and programs to be among peers and have a safe environment to explore thoughts and emotions. Each month the TAPS Online Community hosts a men’s only video chat where you can have open and honest conversations from the comfort of home. For in-person connections, there are retreats for men as well as discussion / support groups at TAPS seminars.

I chose to channel my energy and offer my experience and encouragement to other men in order to keep me on a healthy path and honor my son. You can also take your experience and be a beacon of hope for another. If you are 18 months beyond your loss, you can complete training to become a TAPS Peer Mentor. You will be given tools to help you be a companion and offer hope to another.

The grief journey is different for each individual. We find our own way in our own time. My chosen path has strengthened me and opened my life to a wonderful circle of friends. I invite all male survivors to participate and connect with others through TAPS programs and I look forward to meeting you.

Don Lipstein is the surviving father of MA2 Joshua L. Lipstein, US Navy and is a TAPS Survivor Care Team staff member.