At this year’s NFL Pro Bowl, twenty families, including my children and myself were treated by teams4taps to a once in a lifetime experience. Initially, I was excited yet anxious. My children (Liam and Gracie) and I had only attended one other TAPS event. The seminar and Good Grief Camp had been so positive for us and I hoped this event would be as well.

From the moment we landed in Orlando, TAPS military mentors and staff extended kindness and warmth to all the families attending and we immediately felt that we were amongst friends. Every detail was planned for what became an amazing weekend. 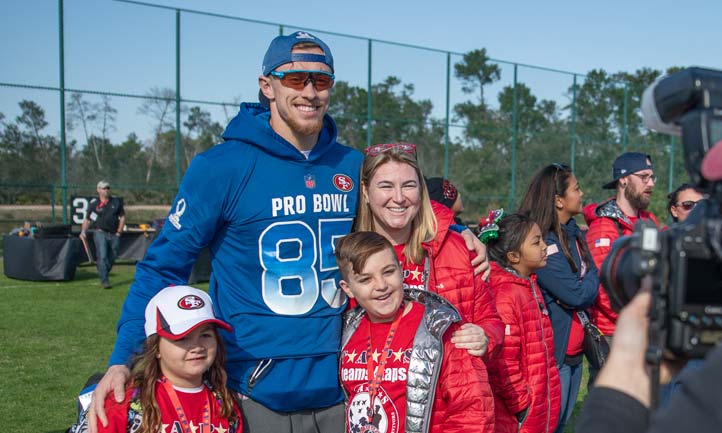 On Friday, we were able to observe the NFL Pro Bowl players’ practice. When practice was completed, TAPS families were able to meet the players, get autographs and take pictures. As a lifelong San Francisco 49ers fan, you can imagine how excited I was when all three 49ers came directly over to my family and me. George Kittle, tight end for the 49ers, took my daughter Gracie in his arms and onto the field so a better picture of them could be taken. Much to my delight, Gracie now tells anyone who will listen that she and George Kittle are best friends.

The next day, every family was paired with an NFL player and together we took on a woodworking project, making American flags as a take home memory of our experience. This was great as we got to have one-on-one time with the players and could share about TAPS and about our hero that we were honoring. Sunday was game day and we all attended the Pro Bowl. Despite the pouring rain, everyone donned his or her TAPS poncho and we had a fantastic time.

While the Pro Bowl activities were amazing, the most delightful aspect of this trip was the feeling of acceptance and love we felt from all the families, TAPS military mentors and staff. When we left, it was like leaving a family reunion. We were all there because we lost someone we loved. I could share my story and talk about my husband with both laughter and tears in the same sentence and they understood. Being able to talk to others in a safe environment and to be able to tell your story with others who know what you’re going through is priceless. Bonnie Carroll, TAPS President and Founder, said, “TAPS loves you and we are your family.”  I truly feel that way and so do my kids. My son Liam and another boy were talking while on a bus ride. The boy told Liam how his dad died and Liam replied, “My dad died too.” Liam then said, “But it’s okay, because we are like brothers now because we are part of the TAPS family.”

When we got home, Liam asked if it would be okay if I brought the flag, his autographed ball, autograph book and TAPS lanyard from the Pro Bowl experience to school so he could show his class. I said of course as long as it was fine with his teacher.

So, I went to school, brought all of the items and stood with him in front of the class. I thought immediately he would start showing off his autographed hat or ball. But there, in front of his class, he gave me a sweet surprise. He picked up his TAPS lanyard and began to tell his class what TAPS was, why we were involved and some of the things TAPS does to help families like ours. He then explained how TAPS is like a family to us now and since they are family, they help us by talking about his dad and helping our family heal. As much as I would like Liam to open up about his feelings to me, he rarely does. In that moment, my heart was so full.

This was the first time most of them found out that Liam’s dad had died three years earlier. And kids being kids, they had questions. It was a great opportunity for Liam to share with his classmates and he was so proud to be able to talk about his dad and our life in the Army before we moved there. He eventually showed his ball, the flag we made and some of our pictures. His classmates were excited to see them!

As I got into my car to go home, I sat there and realized - this is what TAPS is all about. They are our new family. We can speak our truth - good, bad or ugly - and we are still accepted. We can take down our armor; show emotion and it’s okay. We can laugh, share, cry and grieve and we know they will be there for us - no matter what. Now, as a single mom, I don’t really have anyone to share with, so it’s amazing for me to be around others who know what I’m going through and to share our experiences. As a family, we are thankful for this wonderful opportunity we had and for all the new friends and family we made.

Christina Romero is the surviving spouse of MAJ Benny Romero, US Army.

teams4taps and Stars4TAPS offer opportunities to create new memories while honoring your loved one. To learn more and share your story of a favorite sports team, athlete or entertainment activity visit TAPS Sport and Entertainment.