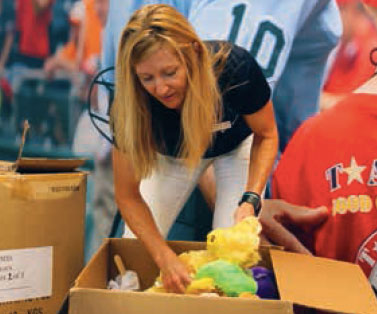 When Bethany Jones first volunteered with TAPS, it was crystal clear that service was a quality deeply ingrained in her identity.

Bethany had the benefit of seeing service to country modeled by her parents growing up as an Air Force daughter. That service was echoed when later she became an Air Force wife and mother. Over the many years of moving from one duty assignment to another, Bethany has viewed each move as an opportunity to re-invent herself, and it’s no surprise that most of the work that she had engaged in has an element of service to it. Whether it was customer service in her faux finishing business, serving the public as a middle-school teacher, or her 9-year private practice as a massage therapist, she felt strongly about a one-to-one connection that comes with serving others.

Living in the Washington D.C. area, Bethany first connected with TAPS as she participated in the Wreaths Across America event at Arlington National Cemetery last year. When she saw the TAPS volunteer call to action for wreath cleanup efforts in January, she thought it would be a good way to see the full circle of the annual program. And with her two boys home for the holidays, the entire family was able to help with both the laying down and the picking up of wreaths. Lending a hand to honor the fallen in this simple way, Bethany said she “felt it important and significant because of the location.” She admitted that before the cleanup, she had never heard of TAPS, but after receiving a hand-written thank you note with information about the mission and future volunteer opportunities, Bethany decided she wanted to serve more. We’re so glad that she did.

As TAPS moved our headquarters in February of this year, three floors down from the office we had occupied for the previous five years, we not only gained square footage, but we also recognized the need for a new volunteer role. Thus the guest liaison volunteer emerged. As the first face of TAPS headquarters, guest liaisons warmly welcome visitors and honor all of the military families, survivors, donors, partners, and guests who visit TAPS. From greeting all arrivals, the guest liaisons also help with other administrative tasks, special events, and program project support.

As one of the first to take on this new role, Bethany has been an exceptional volunteer from the very start. Sharon Paz, manager of Volunteer Resources, says, “Bethany’s poise, professionalism, and genuine friendliness are a credit to her outstanding character. She’s a joy to work with, and I’m sure to smile every week when she comes to volunteer with us.”

Bethany shines as a guest liaison, and she shared with us that the position has provided her with “the opportunity to meet strong, caring and compassionate” people, and she enjoys the connection that comes with working with others who are passionate about the TAPS mission. From the fellow volunteers to the staff, Bethany feels “a positive, upbeat energy at headquarters that is contagious.” Other volunteer support that Bethany has provided TAPS includes assisting with the media at the Honor Guard Gala, preparing monthly anniversary cards for survivors, doing research in support of regional seminars, and transcribing data from Good Grief Camps.

Though she volunteers every week in the headquarters, Bethany will tell you that the one engagement that really made an impact was when she helped with pack-out for the Good Grief Camp after this year’s National Military Survivor Seminar. She paid TAPS the ultimate compliment by telling us that her experience volunteering with TAPS reinforced that she “chose the right organization to volunteer for.” Bethany says that she was moved by the enormity of the national seminar. “It was a beautiful event, and it was powerful to see all of the families,” she recalls. Bethany said that she was amazed by the connections she was seeing between all of the survivors attending. “I couldn’t walk through the foyer or lobby without getting chills at how powerful the work was to all the attendees and see their profound gratitude.” Seeing survivors at the end of the weekend all dressed in red, hugging, smiling, and interacting with one another Bethany says was like a family reunion.

We’re honored that Bethany has become part of the TAPS volunteer family, and we thank her wholeheartedly for her generous service.