Over the last several years, TAPS has developed amazing relationships through our Sports and Entertainment program providing families with opportunities to honor their heroes and create new memories. Teams and individual players from the NFL, NBA, Major League Baseball and NCAA have created memorable experiences for TAPS families and they step up even more during the holiday season, bringing joy during what can be a difficult time of year. 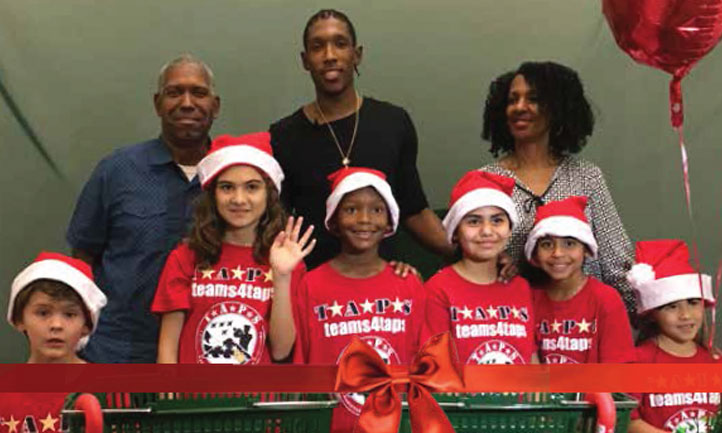 In December of 2014, Patrick DiMarco and the Atlanta Falcons Community Relations team hosted a party at a Wal-Mart outside of Atlanta featuring dinner, games, pictures with Santa, presents and an opportunity for surviving children to go shopping with a Falcons player to spend $250 however they wanted. The aisles at Wal-Mart were filled with TAPS kids picking out items for themselves, their siblings and for most of them, their mothers. Many took the opportunity to buy something for mom, primarily because dad was no longer around to shower her with presents. One child spent all of his money on his mom, only to have the player shopping with him offer encouragement to pick out something for himself as well. Kids roamed the store, trying to find the perfect gift. They bought footballs, dollhouses, sporting equipment and clothing. Other shoppers looked on as players pushed shopping carts filled with holiday cheer. They were awestruck by the players and as they asked about the kids in red shirts, they came to discover the true heroes were those kids learning to enjoy the holidays without their fathers.

Two years later, Brigham Young University reached out to teams4taps with the hope of creating a special evening for nearly 30 local family members whose loved one had a connection to the university. They sent vans and delivered everyone to the university where a catered meal awaited.

At the conclusion of dinner, they were all given gift bags filled with BYU swag and then were escorted to the men’s basketball game. At half time, their loved ones were honored as their bios were read and the camera showed the families on the Jumbotron. At the end of the game, family members got their pictures taken with Mitt Romney and got to meet each player of the team as they came out and signed posters, swag and spent time talking with each survivor.

While the game was being played, the university staff had collected personal information about the families and then they went shopping, and enlisted elves to help wrap presents. At the end of the evening, families were led to a room where the presents for each family member were waiting. Children received shoes, games, basketballs, alumni got

university swag, and an engaged couple received a set of pots and pans. Every gift was individualized and a complete surprise. The evening reminded these families they have a community that supports and cares for them.

Josh Richardson of the NBA’s Miami Heat, reached out to TAPS in 2017 wanting to provide a special Christmas experience for TAPS families living in southern Florida. Josh was raised in a family who believed in service. His father is a retired Oklahoma City firefighter and his mother a retired lieutenant colonel in the Air Force Reserves and is an ordained Baptist minister. He said he was “excited to meet the families… and take the kids shopping for the holidays. These families lost loved ones who gave the ultimate sacrifice for our country and are true heroes. Me and my family are forever grateful for their service and look forward to enjoying a special few days together during the holidays.”

Josh and his family, along with four TAPS families went to Dick’s  Sporting Goods, and each family received Miami Heat goodies and a chance for photos with Josh. After Josh shared why he wanted to support military surviving families, he gave each child a gift card and sent them out into the store to shop. The first stop for everyone was the shoe department, as it was very important to Josh and his family to make sure that each child received a good pair of shoes. Then the fun really began. Josh could be seen around the store playing basketball with the younger kids, serving as a human hoop for them to dunk. He also played catch with a couple of young ladies who had purchased new softball gear, and even kicked around a soccer ball with another child. The following evening, the families were Josh’s special guests at a Miami  Heat game, sitting courtside during warm-ups and taking group photos  at center court. The joy reflected on each child’s face made it clear that Josh had truly made a meaningful impact and had fans for life.

In that same year, the Detroit Lions wanted to offer holiday help to those from the TAPS community who were struggling emotionally and also facing tough times financially. They brought families together for a fun afternoon of gaming and activities at a private gathering at Dave & Buster’s and then surprised families with gift cards, team gift baskets, Lions’ gear and other goodies. Players like Lions’ tight end Eric Ebron and wide receiver Golden Tate were seen competing in basketball, skeeball and other interactive games with TAPS kids. Laughter and joy filled the room. As families left the event and hugged the players, they were leaving with their arms full of holiday goodies and hearts full of hope.

Nationals Winterfest has become an annual and much anticipated holiday tradition for TAPS families living in the Washington, D.C., area, courtesy of our friends at Guidehouse (formerly PricewaterhouseCoopers) and the Washington Nationals. This interactive baseball-themed holiday festival is a great opportunity for families to celebrate their love of baseball and the holidays. This event could not have come at a better time in December 2017. On Saturday Dec. 16, many TAPS families spent their morning at Arlington Cemetery for the annual Wreaths Across America gathering, laying holiday  wreaths on the graves of their fallen heroes. That afternoon, many of the same families came together at Winterfest, participating in activities and meeting their favorite Washington Nationals players. It was a day of remembrance, honor and celebration of their heroes.

The theater community both in Washington, D.C., and Omaha, Nebraska has also been very supportive during the holidays. The Orpheum  Theatre in Omaha included TAPS families in their 2016 Heroes Night, recognizing their service and sacrifice in a special ceremony before that night’s production of the award-winning musical “White Christmas.” The Shakespeare Theatre Company of Washington, D.C. has invited TAPS families for several seasons to take part in Winter Revels, a holiday-themed festival, followed by performances of shows like Shakespeare’s “Twelfth Night” and the musical “The Secret Garden.”

For the family of United States Army Maj. William J. Bainbridge, IV, it’s been an especially meaningful experience. Surviving spouse Maggie said: “Bill loved the theatre and tried to encourage a similar love with Matthew and Elizabeth. Most of all, Bill enjoyed taking the kids to see Shakespeare. The first Christmas holiday after Bill died, TAPS invited us to see the Shakespeare Theatre Company perform ‘The Secret Garden.’ After the amazing performance, we were able to meet the cast, make ornaments, watch a magician and eat delicious food.

“At the production of Twelfth Night , one of the crafts was making wreaths from dried flowers. The kids and I all made one and for the next three visits to Arlington, we would leave one of the wreaths at Bill’s grave. We are so thankful to TAPS and the Shakespeare Theatre Company. Everyone we met was lovely. The staff and cast asked about Bill and the kids loved sharing their memories of going to the theatre with their dad. Both performances were extraordinary and we are so thankful to have been invited.

“We now have more happy memories of the theater to add to the ones we have with Bill.”

TAPS Sports and Entertainment seeks to create meaningful opportunities with the sport, team, player or aspect of the entertainment industry that used to bring a smile to the face of a family’s hero or that has been a source of healing to them in the absence of their loved one. We are so grateful to our friends in the sports and entertainment world for wanting to bring holiday joy to our families during the time of year that their loved one’s absence can be the most poignant. As we approach another holiday season, we look forward to new opportunities to provide hope and support to our survivors in partnership with our friends in sports and entertainment.

From the pen of...
Leigh Edmonds is manager for TAPS Sports and Entertainment.