A strategy for coping with grief

Grief feels a lot like winter. Winter is cloudy, overcast and cold. The heavy, gray skies make you want to withdraw. People tend to stay closed up indoors, isolated from their friends. The days are dark and icy and bleak. Our family's grief-winter started when two Army officers showed up on our doorstep early one morning in October 2004. It felt like a cloud of winter descended over everything. Its icy fingers reached into every crevice. My heart, my mind and my world were forever changed. 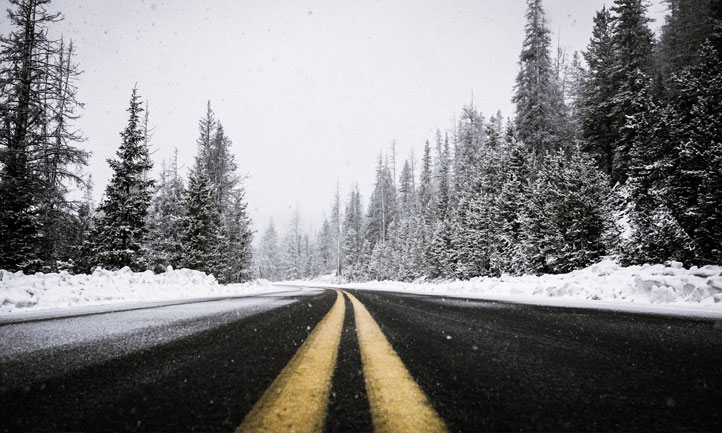 The wintry blast of the news of Brad’s death was disorienting. My mind careened between confusion and disbelief and the awful truth. I was reeling with bits and pieces of information: confusing press releases and interview requests and questions of when Brad’s body would be sent back from the war zone and where would he be buried and on and on and on. My thoughts swirled around like a blizzard, so thick that I could barely see the landscape of reality. What would this mean for our family going forward? Now our challenge was to adjust to a world without Brad in it.

Just as winter settles in for a season, grief settled in for a much longer season than I had thought possible. It’s been six years now since Brad’s death. In looking back, I realize that some of the same strategies for coping with winter weather apply to coping with grief, in particular a driving technique for slippery roads.

When I was young, I lived in Pennsylvania and had to learn to drive in the snow and ice. At that time, most cars were rear-wheel drive vehicles. The engine and all its weight were in the front, but the wheels that propelled the car were in the back. In slippery conditions, a rear-wheel drive vehicle could lose traction easily since the rear end was light. In making a left turn, for example, the rear wheels could break traction and swing wildly toward the right. The driver’s natural reaction would be to turn the wheel farther to the left. The result would be an uncontrollable skid, or spinout. The correct way to counteract the skid is to turn the steering wheel into the direction of the skid — in this example, to the right. By doing so, I learned you can regain control of the car. At first turning into the skid felt wrong. Everything within me was screaming to go the opposite way, to turn away from the perceived danger. Until I had practiced the technique often and successfully, it was pretty scary.

I find that grieving feels a lot like driving on snow and ice in a rear-wheel drive car. Although it may feel counter-intuitive, it helps to steer into the wild emotions of grief, purposely setting your course to go toward them. After Brad was killed, I really wanted to avoid experiencing the waves of grief and sadness that came my way. The emotions were so intense they were frightening. I thought that if I allowed myself to feel the emotions of loss I would start an uncontrollable skid. As a guy, I wanted to steer clear of the “messy” emotional turmoil. What I discovered, though, was that when I allowed myself to experience intensely sad emotions, I seemed to emerge on the other end with a better sense of equilibrium.

For me, steering into the skid meant taking advantage of counseling services offered by the VA’s Vet Centers. There was a set time and place every week for me to encounter the turmoil and express my grief in a safe environment, a place where I could give voice to my sadness and loss. I found that trying to express what was going on inside helped me to understand and endure the blizzard-like whirlwind of emotion.

According to John MacDougall, manager of spiritual care and the family program at a nonprofit treatment center in Minnesota, “Our bodies are not well designed for the storage of feelings, but they are well designed for the expression of feelings. Grief doesn't go away, and the longer it is denied, the more powerful it can become.” Some emotions are difficult for us men; some are easy. Anger is usually easy. Not only does it come naturally, but it is considered OK for a man to be angry. Other emotions are more troublesome. Sad, for me, was difficult. Feeling helpless was another challenging thing for me. I felt helpless as I watched my wife and daughter’s incredible sadness and not be able to do anything to alleviate their pain.

Steering into the skid means examining, acknowledging and expressing the scary negative emotions with other family members and friends, as well. I learned that I didn’t make things “worse” for my wife and daughter by talking about Brad.

Indeed, they shed tears when we talked about him, but not talking about him wasn’t making it “better.” I might have been steering away from the skid for myself, but the conclusions they might draw from my silence would not reflect what was truly going on with me. They might think that I wasn’t sad, that I didn’t miss him, that I was doing just fine, or even that I was “over” Brad’s death. None of these were true, but my silence certainly could not communicate my real internal state. During the times that we talked about Brad there were tears, but my talking about Brad did not cause those tears; it released them.

In the same way that winter always seems too bitter and too long, I was not at all prepared for the intensity of the sadness or the length of time that it took for me to begin to enjoy life again. I still would like to have my son back every day, but the intense, elephant-sitting-on-my-chest pain has subsided to a quiet sadness that many people don’t even notice.

As I navigated my grief-winter, I remember seeing the first sign of a returning “spring.” The first time I laughed I felt guilty that I could find anything funny. I mean, how could I? Brad was dead. I remember thinking that I shouldn’t have to give myself permission to laugh. And then the next day as I struggled at my job, I had to give myself permission to feel sad. I realized that I didn’t have to function like I did before. A friend of ours whose husband had died before Brad was killed wrote us a letter in which she said, “I get frustrated with myself because I can’t engineer my recovery of equilibrium any faster. The seasons of our lives must be lived through, however, not jumped over if we want to be whole.”

Because we love someone who died, we must live through the winter of loss. We can’t jump over it or get around it or get over it. Acknowledging and expressing grief is a difficult road to navigate, but the price you pay trying to detour around it can be much worse. Don’t try to avoid the wintry patches on your grief road, but rather remember to steer into the skid.

This article was reprinted from TAPS Magazine Winter 2010, Issue 16, Volume 4