There are few things more iconic in American cartoon art than the ongoing story of several friends, one beagle, and one bird in Charles Schulz’s Peanuts. Schulz penned this strip regularly for almost 50 years, over the course of which we watch Lucy, Peppermint Patty, Marcy, and the rest of the characters dabble in everything from sports and curbside psychiatry to bad hygiene and attachment issues. Among his many contributions to popular culture, we can even count the term “security blanket” — which Schulz coined for his character Linus.

Peanuts ended with Schulz’s farewell announcement, published the day after his death in February 2000. (The timing was unintentional. Schulz submitted the farewell, then retired to his room, where he died in his sleep). Some might say that the timing — the end of the cartoon and the end of Schulz’s life — could not have been better scripted. Yet, no ending in the cartoon, his labor of love, was ever tied up so neatly. 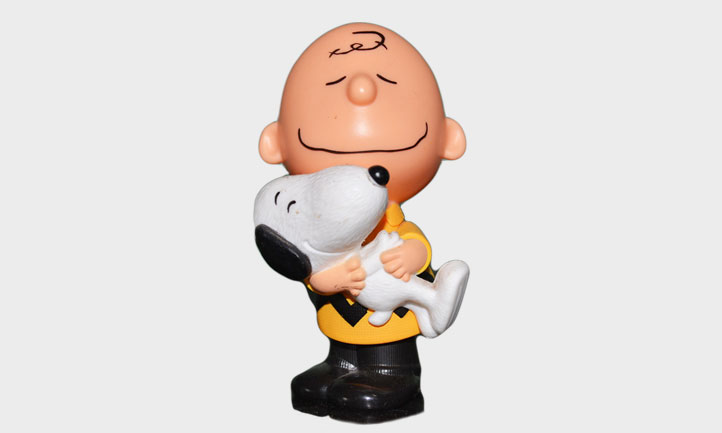 It is so by the creator’s design. There are Peanuts comics where the characters wonder what it’s like to have a broken heart and not be able to sleep, storylines where Snoopy is aimless and dissatisfied on Sunday afternoons, sketches about worry and anxiety and failure. In all of them, the characters were left, like all of us, with feelings that were unresolved.

Schulz himself noted that the football is always pulled away; the loves are always unrequited; The Great Pumpkin never comes. Just like for us, there isn’t always an easy answer. Often, the last scene in the comic strip shows one of the characters disappointed, bereft, or forlorn.

In this way, Charles Schulz introduced a level of melancholy into the mainstream. Beyond the touching scenes and sentiments like, “happiness is a warm puppy,” he also allowed readers an unexpected and beautiful gift. In stepping away from the comic strip, we realize that, between laughs, the characters were showing us how humans, even sports- and beagle-loving children, learn to ache.

If you’ve ever watched A Charlie Brown Christmas, you’ll remember that no matter what form your holiday celebrations take, there is no time when Charlie Brown struggles more with his questions of purpose, fulfillment, and belonging. Walking with his best friend Linus, Charlie says, “I think there must be something wrong with me, Linus. Christmas is coming, but I'm not happy. I don't feel the way I'm supposed to feel.”

He goes on to say that he likes presents, cards, and decorations, but that “I’m still not happy. I always end up feeling depressed.” As the show progresses, Charlie Brown’s malaise plays out as frustration with the petty concerns of the season — his sister Sally’s wish list, his friends’ attack on his taste in trees, and how being laughed and misunderstood magnifies his feelings of loneliness.

Seasonal changes can be hard because they are another way to mark time. In addition, we’re told that this season is for “togetherness” and “family,” but we know all too well that this meaning changes with time, circumstance, and even where we are in our own grief and spiritual journeys. It’s also too easy to make comparisons, to look at outcomes in “other families,” to believe the illusions that all is magic. We struggle with how much we’ve lost and how much remains. Maybe we’ve never been told before that gratitude has its own blunt edge — that, for everyone, fullness and longing can exist side by side.

Charlie Brown echoes our grief experience when he says that he just doesn’t understand and that he doesn’t need a holiday to remind him that he’s different. We know that, no matter what our traditions are or were, there will always be something that isn’t quite right. Being “a little bit Charlie Brown” this season isn’t about giving into depression or isolation. In fact, it’s the opposite — it’s about universalizing it. It’s about knowing that, for everyone, sometimes emotions feel like heavy chains and not shiny tinsel. It’s about doing the best you can given what you are emotionally equipped to do at the time.

If you’re feeling a little bit like Charlie Brown this season, here are some things that might help you feel a little less alone.

When Charlie Brown swings by Lucy’s advice stand, saying, “Instead of feeling happy, I feel let down,” she gives him some sage (if glib) advice. “You need involvement! You need to get involved in some real Christmas project!” And so Charlie Brown becomes the director of the holiday play, the backdrop against which his subsequent dejection and brave hope both occur. Involvement was part of the answer for Charlie Brown; it may be for you, too. Maybe your project is volunteering, or maybe your project is escaping on a cruise. Maybe you give yourself something to look forward to that has nothing to do with any pressures of the season. It could be the right time to pick up a hobby, work overtime, or focus on your physical health and fitness (it’s easier to cope with everything when your body and mind have done good, hard work.) Remember, too, that Lucy’s advice only cost a nickel (which may be affordable no matter your stance on healthcare reform), so if you get advice that feels worthless to you, or that doesn’t resonate with what you need, well, seek it somewhere else.

Schroeder’s choice in music for the production is criticized, but he knows what he wants. Choose your own soundtrack - both musically and verbally. If you’re around people who are trying to demean your opinions — whether those opinions are about decorations, feelings, or why you like the David Hasselhoff holiday album — then you’re just going to feel less like being engaged in the world around you. In the Peanuts version, when Schroeder is feeling a sense of self-determination and is confident in his choices, his toy piano sounds like a real piano or an organ. When he feels smaller, his piano sounds smaller. Remember that this happens with us, too. Don’t be afraid to find your voice. Charlie Brown and his friends are, in many ways, frozen in their dynamic, but you’re not.

Use Your Own Charlie Brown

Charlie Brown does a lot right — he’s honest and vulnerable; he doesn’t hide his feelings; he seeks the advice of his trusted, if imperfect friends; he walks away when he knows deep down that he needs to do so; he allows himself moments to reflect in the open air. He takes comfort in his dog.

Part of the Peanuts ethos is that we still hope that Charlie Brown will hit a home run - we still hope that there will be joy. Charlie Brown doesn’t trust it all the time. In fact, he’ll make a decision to make the best of things one minute; in the next minute, he’ll declare everything ruined. Allow yourself to safely swing as you need to between these extremes, without holding yourself firmly to either one. Feelings treated as feelings, not as commitments, pass and resolve - or else they persist and we are compelled to seek some sort of deeper resolution with them.

Charlie Brown gets frustrated with his perceived shortcomings, but it’s his honesty that helps us (and him) stay present and keep moving forward. It’s uncomfortable, but it’s universal. Either way, the reason why we have loved Peanuts for more than 50 years is that, even reluctantly, and even grumpily, on a daily basis - there doesn’t have to be a resolution for there to be hope.

So, if you’re feeling a little bit like Charlie Brown, remember why millions of people love him and know that your TAPS family loves you, too.

From the pen of...
Emily Muñoz is the surviving spouse of Capt. Gilbert A. Muñoz, U.S. Army. She is director of TAPS Inner Warrior program.