Editor’s note: November is Children’s Grief Awareness Month. Throughout this month, we have featured stories from surviving children, parents, grief professionals and TAPS staff to draw attention to the needs of grieving children, their experiences and how best to support them. 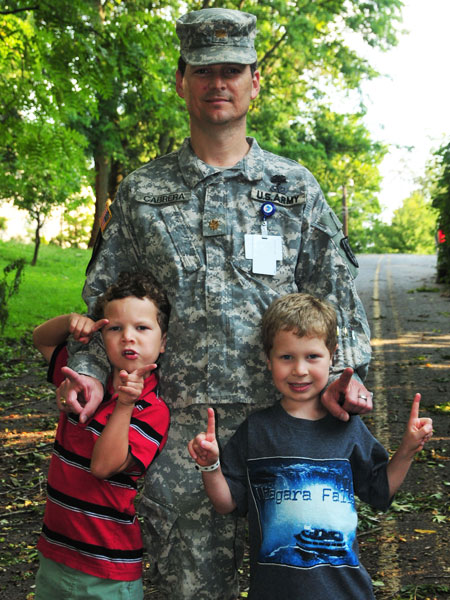 I have a picture of my boys from seven years ago: One is wearing a new striped polo, the other a Niagara Falls T-shirt from our summer vacation. Their hair is actually combed, their faces are freshly washed, and they are standing on the path from our house to the school. It is our youngest boy’s first day of kindergarten and his brother’s entry into first grade.

They are each holding up a finger to show the number 1, in excitement over the first day of school. Joyful anticipation of this great adventure fills their young faces. Standing behind them, one arm lovingly draped across each boy’s shoulder, and also with a single finger in each hand showing the number 1, is their soldier dad. Dressed in his uniform (and definitely late for work), Dad looks invincible as he stands with his two youngest children on their way to school.

There is a look of pride and contentment on his face as now all four of his kids are off and running toward their futures. A few years earlier Dave had done the same with his two older kids from his first marriage. We scrounged up the money for a round-trip plane ticket to Texas, and he flew down to walk his oldest to his first day of kindergarten. The next year he walked his daughter to hers. He wouldn’t have missed the first day of school for anything.

A few weeks after that fresh-faced photograph of our boys was taken, as they were settling into their school year, Dave took a trip to the desert and didn’t come home.

It’s been seven years and this fall our youngest son entered seventh grade and his brother started his first year of high school classes. Dave’s daughter is a sophomore in college and his oldest a junior, both at their dad’s alma mater.

Seven first days without him. Seven years of new teachers and new schools. Seven years of report cards, awards, and lunch detentions. Dave was a child therapist by training, and he would have known how to manage the drama of middle school, the chaos of freshman year, the heartache of a daughter without a father to escort her on the homecoming court. Instead, we are left trying to figure it out as we go along— without a dad to fill in the gaps.

Each first is a time for tears, but as the years go by the grief changes—it is never easy, but it does get easier. Along our path I’ve learned a few things that have made our back-to-school days a bit less sad.

Let the kids find their own way to process the day.

The kids all deal differently with each first day: one makes sardonic jokes, another simply remembers, one is vocal about the sadness, and one keeps to himself. After Dave first died I tried to force emotional processing at each milestone, questioning my boys about how it made them feel to not have Dad around on days like these. It took more time than I would like to admit for me to realize this was not helpful to my kids. That isn’t true for everyone, but for mine it was a disruption to their own internal process and I was getting in their way. They know what they need, and I needed to learn to trust them. Give them resources (like they get at TAPS Good Grief camps), but know they know what they need in the moment. I’m here for a hug, a fist bump, or even a good cry. Their choice. As for me, when I make them stand on the front porch for the requisite photo, I try not to notice there is someone missing from the picture. I cry after they get on the bus. It seems easier for us all.

We all have ways of celebrating momentous occasions, but changes in the family makeup combined with the kids getting older will inevitably lead to different ways of marking those days. I’ve found that the best thing to do is follow the kids’ example. I don’t walk my boys to the bus stop anymore (too embarrassing for them) and I try not to intervene as I see my boys pick out casual, but not obvious, outfits for the first day of school (they are far too old and too cool for Mom to pick out their clothes). Now they choose their first day of school special breakfast, lunch, and dinner, all their school clothes, and decide if I am driving them to school or simply waving to them quietly as they walk out of the house in the morning. Every year changes, and that’s a good thing, as they continue to discover who they are becoming as young adult survivors.

Let the sadness be tempered with joy.

Yes, it is terrible we have lost someone we love. But we have these little hearts and souls that need our support and strength. Do I cry every year? Absolutely. Do I sometimes get angry at the fact that I am the one sending them off to school without support? Yup. But do I also look at the smiles on their faces and find gratitude in my heart that I get to send them off to a new challenge? Of course. I would do anything—wouldn’t we all—to protect my kids from the pain and brokenness they’ve learned to live with. But I would be failing as a parent to let them dwell on the loss and not look to the goodness around them.

No matter how hard, first days are good things. It is the beginning of a new year—a new chance—and I want my kids to embrace that opportunity. It is hard not to have Dave here as the kids keep walking toward their futures. There are bits of sadness that Dad isn’t around, but in between those painful moments there are glimpses of joyful anticipation for the next adventure on each of their faces. And that is exactly what he would have wanted for his kids.

From the pen of...
August Cabrera lives outside Washington, D.C., with her two boys, fiancé and dog. She recently completed her Master of Fine Arts in creative nonfiction from Goucher College and is working on a memoir about her experiences with grief. She is the surviving spouse of Lt. Col David Cabrera.