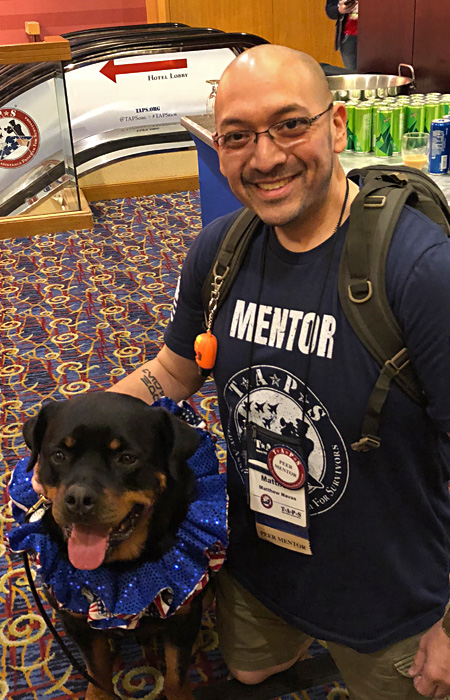 Matthew Navas has dedicated himself to serving others. He served his country as an Army combat medic, he served his fellow soldiers. After 9/11, he cared for the victims of the attack at the World Trade Center.

Two years ago, Matthew went to the TAPS National Military Survivor Seminar and Good Grief Camp as a corporate volunteer with his employer, Hasbro—the company that makes Monopoly, Play-Doh, Nerf and other favorite toys. The Hasbro network of military employees hosted the Good Grief Camp Zone, welcoming hundreds of grieving military children to their first day of camp. Matthew’s work as a designer helped him feel right at home as he interacted with the children and guided them as they played games and met new friends. It didn’t take him long to realize his presence was offering a place of comfort and safety for these young survivors.

This experience allowed Matthew to reflect on his own personal journey of grief and motivated him to become more involved with TAPS—as a survivor. In 2005, his brother-in-law, Lance Cpl. Shayne Cabino, was killed in a bomb attack in Afghanistan. TAPS had provided Matthew a community of support where he felt he could freely share his grief in a way he could not do while in the military.

“It had been so long since I had been with people who had been through the same experiences,” he said. At the seminar, Matthew was able to connect with support services and get to know other survivors. These connections were therapeutic for him and, true to his passion for serving others, he decided to complete training and become a TAPS Peer Mentor. Now he is volunteering his time to be a comforting friend to adult survivors as they cope with loss.

“While we all have our own journey to travel, it amazes me what a talk, a walk, or a hug can do for another person’s wellbeing,” he said. “I don’t want anyone to ever feel what I felt before, or that they are alone in what they are going through.” Supporting others helps him with his own grief and allows him to honor the service and sacrifice of his brother-in-law.

Discover volunteer opportunities available to you to join our mission and have an impact on the lives of grieving military families. You can also call the Helpline at 800-959-TAPS (8277) and ask for Volunteer Resources.
Related Articles: