There are times in life when we feel completely lost. The foundations that held us in place and helped us to make sense of the world are broken and we are left trying to make sense of a new reality. This is particularly true when we experience the death of a loved one. Not only do we go through the grief of losing a person we love, often times we lose our sense of self and our place in the world. In times of confusion or pain, nature can help to make sense of the deepest things we feel especially during grief. Trees in particular have been a source of symbolism across cultures and centuries. The tree of life is a powerful image in many religions and faith practices from the stories of the Vikings to the scriptures of Christianity. Trees are also used in memorial, planted to remember something significant and precious.

In the aftermath of the destruction of the World Trade Center, workers found a pear tree amid the rubble. Originally planted in the 1970s, it had been badly damaged during the attacks on September 11, 2001, but it was still alive. The tree was taken to a park in the Bronx where for nine years it was nurtured and cared for. Despite the trauma it suffered, over time new growth emerged from the scars of the broken branches. In 2010, the tree was strong enough to be transported back to lower Manhattan, to be replanted at the site of the 9/11 memorial. A steel railing was placed around it for protection and cables were installed to helped keep it upright.  Over time, the tree gained enough strength for those supports to be taken off, and it now stands strong on its own. If you visit the National September 11 Memorial and Museum, you will notice that although many new branches have formed, the scars from the loss are clearly visible. The trauma it went through is still a part of the tree but that isn’t the end of the story. Its roots run deep and its branches reach high. The tree is a living reminder of hope, resiliency and rebirth. 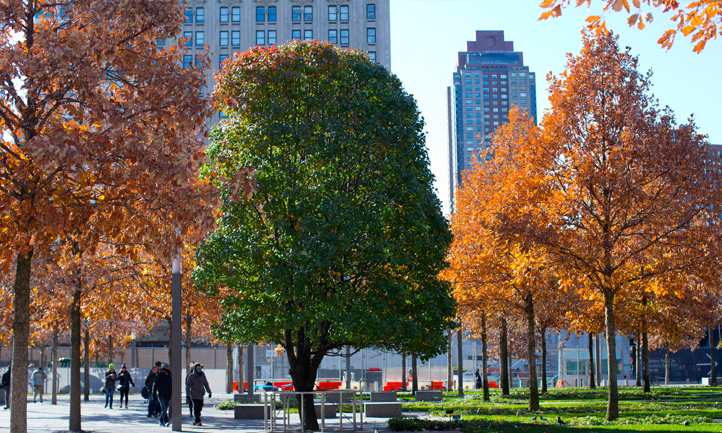 As the seasons turn from summer to autumn, nature is here to support, teach and help us.  Imagine a gentle rustle of wind stirring around you. Above is a canopy of red, orange, brown and gold. Rough bark solidly supports you as you lean into the round trunk. Below you roots curve into the ground in sinewy lines. You close your eyes and take in a deep breath. The rich scent of earth mixes with the sweet smell of change. The tree that just a few months ago was saturated with the bright green of summer has now transformed. Instead of clear light dancing in an emerald shimmer, the sunbeams are muted and softer than before. It may be different than it was, but that doesn’t mean it’s not beautiful.

People often talk about life in terms of seasons. “To everything there is a season,” the poet writes in Ecclesiastes. During this season, take the time to reflect and feel gratitude for the things like the autumn tree that are different but beautiful in your life. Maybe it’s a new friend or job or place that you live. Maybe it is gratitude for small things that you didn’t appreciate before.  The seasons and the trees remind us that new growth, even from the scars, is possible.