The motto of the U.S. Army is also the personal pledge of Daniel Alarik, CEO of Grunt Style, an online apparel company that sells military-themed clothing and gear.

Daniel’s determination to honor the military community is at the root of his business, and is what drives his personal commitment to support veterans and their families. Daniel came to TAPS in 2016, when Kellie Hazlett, manager of TAPS Peer Mentor program, knocked on Grunt Style’s doors in Carol Stream, Illinois. 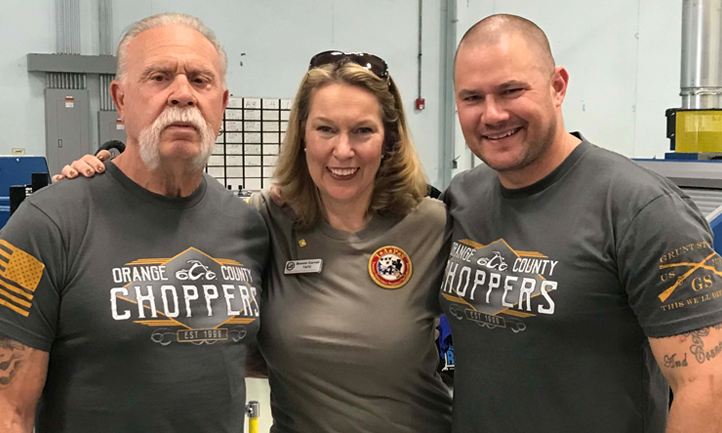 “I was recruiting Military Mentors for an upcoming regional seminar,” Kellie said. “Daniel thought we were looking for a contribution, but we really wanted his time.”

After some persuasion by his assistant, Daniel, an Army veteran, signed up to be a Military Mentor at the Good Grief Camp. It was at camp that he met 12-year-old Jayden Denfrund, who lost his father, Sgt. Jason Denfrund, in Iraq. Daniel had the opportunity to see first-hand the healing, hope and connections made over the weekend event.

“We can never forget because they will never forget,” said Daniel, a former drill sergeant.

Since then, Daniel and his company have been an integral part of the TAPS family. Grunt Style supplied backpacks and duffle bags for Military Mentors and Good Grief Camp kiddos at the 23rd Annual National Military Survivor Seminar, and shirts for the 24th Annual National Military Survivor Seminar. TAPS was the beneficiary of the company’s 2017 and 2018 Memorial Day shirt campaigns.

Daniel continues to find creative ways to support TAPS and be a vocal supporter of the mission. He connected several of Grunt Style’s partners to TAPS, establishing TAPS as a beneficiary of sales from Custom Off-Sets, Brownells, Merica Bourbon and Defiance. In April, NASCAR driver Spencer Boyd drove Grunt Style Racing’s #76 Chevrolet in honor of Staff Sgt. Eric Duckworth at the Texas Motor Speedway in Fort Worth, Texas. Grunt Style also hosted TAPS families at a New Jersey Devils hockey game with the Squad 21 Program.

In May, Daniel invited TAPS Founder and President Bonnie Carroll to the Grunt Style warehouse for a surprise. Bonnie and a group of TAPS survivors were greeted by Daniel and Paul Teutul, Sr., of Orange Country Choppers, the makers of custom motorcycles. Paul presented Bonnie with a custom-made Army-green motorcycle commissioned by Grunt Style. It was auctioned off with 100 percent of the proceeds going to TAPS. The surprise gift presentation was filmed and later aired on an episode of “American Chopper,” a show on the Discovery Channel.

The unique motorcycle was also featured on “Fox & Friends” in New York, where Daniel was interviewed along with survivors Jenni Hansen and her son, Michael, who lost their hero, Staff Sgt. Dennis Hansen, in Afghanistan.

“We support TAPS because these kids could have been mine or my close friend's kids,” Daniel said. “I believe it is our duty to take care of the families of our comrades.”

An anonymous buyer purchased the motorcycle and all proceeds were donated to TAPS. More recently, Grunt Style held a live fundraiser from their office in San Antonio, Texas, with proceeds of shirt sales going toward supporting TAPS programs. TAPS is grateful to have Daniel and the entire Grunt Style family by our side. It is a friendship and partnership that continues to grow.