Months ago, my mom signed my daughter up for cotillion. This would serve two purposes: teaching her social graces and allowing her to bond over tea parties with other kids her age (well, three purposes if you count the alone time I was afforded on these random Sunday afternoons to grocery shop or go for a run). After each class, our three-generation trio would talk about what was learned and how it would be applied in the years to come. Some days we talked about the cookies and lemonade, others about the boredom of learning which fork to use.

One Sunday, my 11-year-old daughter came to me excited to have learned the fox trot. She taught me box steps as we listened to popular music at a blaring volume, laughing at how ridiculous we both looked. But we danced anyway. Together.

Within days, however, laughter turned into something more somber as she confided in  me: “Mommy, I don’t think I want to dance at the Grand Ball,” she said. The Grand Ball would be the final dance of the season, featuring all the girls arm in arm with their fathers, waltzing to Michael Buble’s version of “The Way You Look Tonight.” Through tiny tears and with adult-size courage, she explained that she was scared she might be the only girl being escorted by someone other than her daddy.

As hard as I tried, I couldn’t understand my daughter’s heart in that moment. I had grown up with my father. He did “dad” things for me all my life. He came to recitals, gave me advice, built tree houses, and helped with science projects. He is still alive. My daughter has no memory of her father, who was killed in Iraq when she was 13 months old.

This was uncharted territory for both of us—but if I couldn’t understand, I could help her cope with her distress. We had two options, I explained to her: We could opt out of the Grand Ball altogether, or we could keep a commitment we had—not just to the process of finishing what we started but to a grandaddy who had stepped in to fill the spot that would have been taken by her daddy on the dance floor. An obvious unease set in as my daughter tried to process the excitement of spending time with her grandfather and the pain of not having her own father to dance with. I explained that these conflicting feelings are allowed to live together. That seemed to ease her mind ever so slightly.

The days went on, and we continued our dance practices. Then, along with a large group of girls who were learning etiquette, my daughter was asked to use her newfound skills at a local debutante social, in preparation for her own Grand Ball that would take place one month later. When the night arrived, she stepped out of her worn jeans and sneakers and into a floor-length white gown and sparkly flats, handing out red roses to high school seniors making their debut in the community. I felt proud of her poise and excited that she appeared to be having fun! As her mood seemed to shift from nervousness to complete wonderment, I watched her study each young woman as her accomplishments and goals were announced. I wondered if, perhaps, my daughter might choose this path for herself one day. 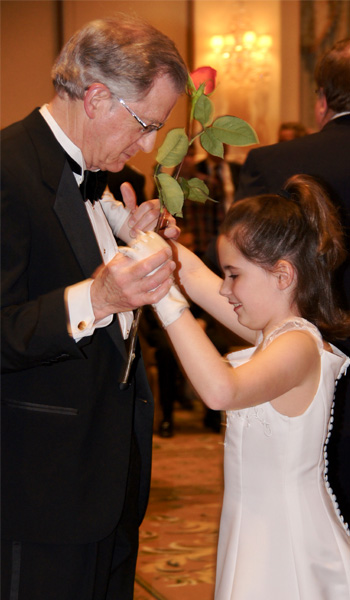 My mission was fierce: Do. Not. Cry. So I didn’t. For a moment I allowed myself to grieve the fact that my daughter’s father would never walk her down the aisle. He wouldn’t hold her children. He would never do the “dad” things I had taken for granted for so many years. I was sad for my daughter’s loss. I harbored anxiety about the future. I also felt the same guilt she did earlier about the role a special grandaddy would play—and disappointment in myself for not giving enough credit to  those who have stepped in to fill the role of father through the years. At the same time, I felt hopeful that our lives would be filled with a sense of peace as we continued to be open to the love that constantly surrounds us.

Deep down, I knew that life itself is a dance—full of ups and downs, backs and forths. More important, I knew that I could grow in this strange space of simultaneous grief and gratitude. As I had once explained to my daughter, these feelings are allowed to cohabitate.

Within moments, the formalities of the ceremony were wrapping up and I saw my daughter walking toward the dance floor with her grandaddy. He in his tuxedo, she in her dress and bare feet, they danced. Together.

This experience prepared us for the Grand Ball weeks later, where I learned two important lessons. The first is that extended family and friends play a vital role in raising a child. We have a village of supporters who continue to breathe life into our little family—and although they aren’t Dad, they play an invaluable role. Second, having made our way through this dance, we are officially equipped to handle the next one, whatever and whenever that may be.

Amy Dozier is a surviving spouse, nonprofit and community service professional, veterans' advocate, and TAPS peer mentor. She holds a master's degree in public affairs and lives with her daughter in North Carolina.