My son, J. Shawn Davenport, passed away two years ago from acute myeloid leukemia while actively serving in the Army National Guard. In his memory on his birthday in June, I make Shawn-Style Enchiladas and share them with my family.

Shawn and I liked our enchiladas with everything: black and green olives, onions, green peppers, jalapenos, banana peppers, hot sauce, and anything else we had on hand. Shawn and I were not strict followers of recipes; we added or subtracted according to available ingredients and what our tastes were that day. His wife and children were much more selective in their choice of ingredients. So when Shawn made enchiladas, he would insert a toothpick to separate ours from theirs. Ours were large and spicy, just the way we liked them.

That’s the way my son lived his life, too: large and spicy. He had a lot of living and loving to do in the 38 years he had on this earth, and he did it! 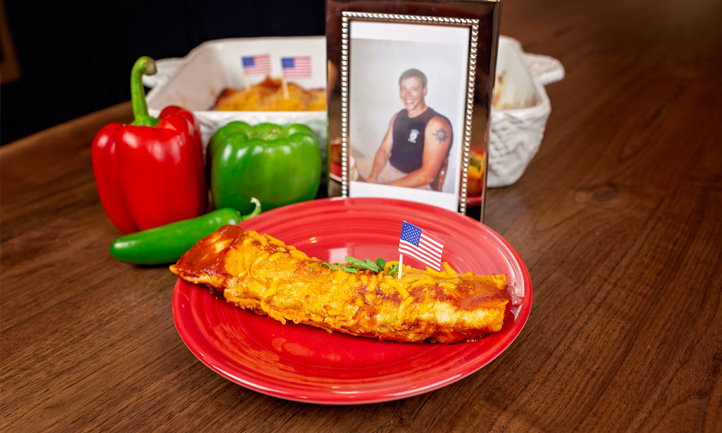 Rita Catlett, a surviving mother and retired state government employee, lives in Frankfort, Kentucky. She enjoys spending time with her three grandchildren, two of whom are the surviving children of her son, Shawn, and riding her three-wheeled Harley motorcycle to commune with nature and connect with Shawn.

If you have a favorite recipe that brings forth memories of your loved one, we would be honored if you would send it to us, along with a brief story about why it means so much to you by completing the Share Your Story form or emailing it to editor@taps.org.