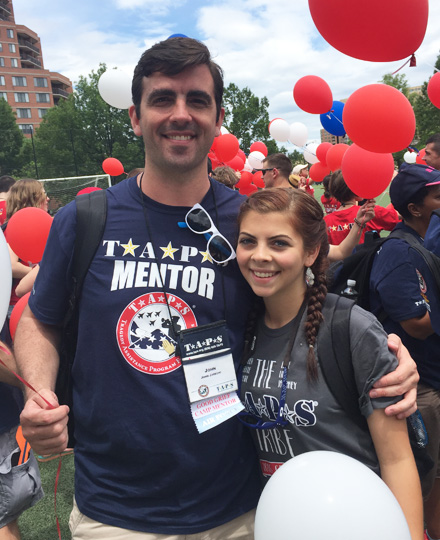 While reading his local paper on Memorial Day weekend in 2010, John Jarecki came across an article about TAPS Good Grief Camp. “There’s a camp for children who lost a loved one in the military?” he thought to himself.

He was shocked to realize there was an organization for people just like him. He immediately drove over to the Arlington hotel where the TAPS National Military Survivor Seminar was taking place, walked in, and asked, “What is TAPS, and where have you been my whole life?”

John was 5 years old when his father, a captain in the Air Force, died in an F4 crash. No one helped his family navigate the financial and emotional difficulties, and John watched his mom struggle with little support and the loss of the military life they knew.

At that seminar, John shared his story and met other families who were grieving the loss of their military hero. He felt a powerful sense of belonging and knew he wanted to be involved with TAPS in a meaningful way.

“When I see TAPS Good Grief Camp children, I have flashbacks to my own experience,” said John, who is now 42 and lives in Alexandria, VA. “I get it because I know the long road of healing they face.”

With guidance from the TAPS Youth Programs staff and Military Mentor Daniel Davenport, John trained to become a Good Grief Camp mentor in 2011 and chose to work with teenagers. “That is a difficult age and transition period,” John said. He knows firsthand how grief can manifest in a young person’s life later on if not properly addressed. “You can’t get away from grief—it demands recognition,” he said.

In 2013 John was paired with 15-year-old Taylor Dudley (shown with him in the photo), the the two shared a close and immediate connection. John watched her grow up and attended her high school graduation. He was also by her side when she received the 2016 Ted Stevens Leadership Award, which is presented to a surviving family member who has demonstrated outstanding leadership on behalf of other military survivors. Taylor was recognized for her work as a Legacy Mentor, a Good Grief Camp graduate who has chosen to give back by supporting younger children who are newer in their grief.

“I feel immense pride now that Taylor is a Legacy Mentor and sharing her own loss, grief experience, and healing with other Good Grief campers,” John said.

In addition mentoring at Good Grief Camp, John supports TAPS in other ways. He is part owner of two restaurants and a bar in the Washington, DC, area—Grady’s, Red’s Table, and the Light Horse—and often hosts fundraisers on behalf of TAPS. He also provides catered meals for TAPS events when asked.

As a survivor and supporter, John knows that the mission and work of TAPS fill a void for those experiencing a military loss. “I feel a commitment to be there for those who reflect my own loss,” he said. “I want to share the lessons I’ve learned to help them find hope and healing.”