Teddy Roosevelt used to go off into the wilderness after losses and hard times. This strenuous exercise and connection to nature and self-reliance seemed to be somewhat curative for him. I have personally found this type of adventure to be helpful for me. I hope this journey and others will be healing for you. 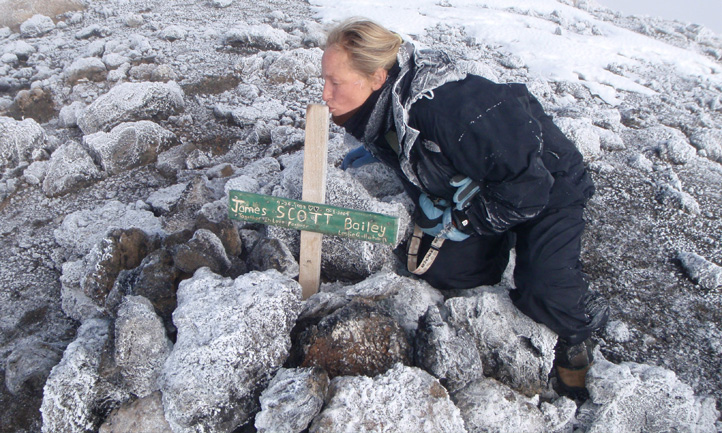 My father, John Gullahorn, died suddenly from a heart attack in 1987. I was 18 years old. He had served driving an ambulance for the Army during the Battle of the Bulge.

In September 2009, I lost my fiancé, James Scott Bailey, in a motorcycle accident. I found out about TAPS and became a member of the TAPS family—a club none of us wants to join but one that is so helpful and caring.

After Scott died, I tried many things to cope: I went to counseling, attended grief groups, and listened to books. I even consulted mediums. I was lost. I wouldn’t act upon it, but I felt that I did not want to live.

I wanted to get away. Far away, where nobody knew me or my story. I guess I just wanted to get myself away from my own story that I did not want to be a part of. I have always loved animals and how healing they can be. So I decided to travel to Africa, where I could go on a safari and where nobody knew me, nobody knew my story, and I could truly escape. While researching the trip, I got the idea to climb Mount Kilimanjaro. I had done technical climbing before but never climbed a big mountain with high altitudes. I thought it would be meaningful to bury some of Scott’s ashes on the top of Kilimanjaro.

My journey to Africa was so therapeutic for my sad heart. The people of Africa were amazing and seemed to appreciate the important things in life. They were satisfied with having basic necessities and weren’t focused on material things. It was humbling. Through climbing Kilimanjaro, being one with nature, and pushing my own limits, I healed and I grew inside. I buried some of Scott’s ashes on the summit and marked the spot with a cross. I received a Facebook message more than a year later from someone who had seen the cross. It was still there!

The healing that happened because of mountaineering hooked me. I next climbed Aconcagua in Argentina—and left more of Scott’s ashes at the top. Mountaineering is grueling. I learned that I had a stronger voice inside that said to me, “Keep going.” In many cases in mountaineering, you are facing the possibility of death. That actually forces you to live in the moment and make that moment count. It was while climbing Aconcagua that I finally discovered that I wanted to live again. What a healing feeling that was.

Since these climbs, I have buried Scott’s ashes on peaks all over the globe, from Alaska to South America to the Himalayas. I gave photos of me on these mountains marked with a cross (which I would leave with his ashes) to Scott’s father, which offered him peace and even joy. 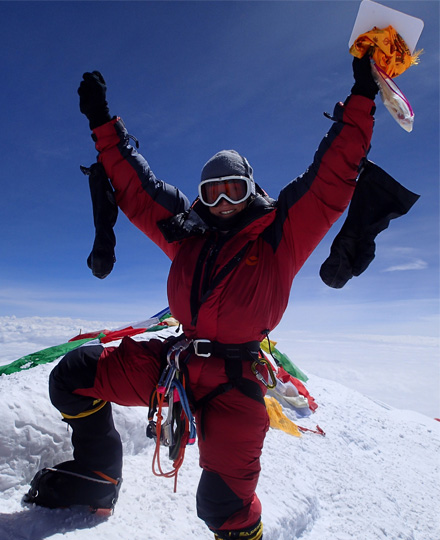 When a great mountaineer, Charles Houston, was asked, "Why climb?" he gave this answer: "It is the chance to be for a moment free of the small concerns of our common lives, to strip off the non-essentials, to come down to the core of life itself... On great mountains, all purpose is concentrated on the single job at hand, yet the summit is but a token of success and the attempt is worthy in itself. It is for these reasons that we climb and, in climbing, find something greater than accomplishment.”

Mountaineering and pushing our own limits allows us to live in the moment and take responsibility for our own lives. As our loved ones would want us to, we can appreciate our past memories while also living in and cherishing the moment.

I again became a member of the TAPS family when my brother, Captain Greg Gullahorn, died suddenly on March 9, 2016. We were very close, and he had always been there for me. I had been training for months and planning to climb Mount Everest, and I was supposed to leave for my two-month expedition on March 28, 2016. I didn't know if I should still go. I talked with my family, and we decided he would want me to go. In Kathmandu, I bought a kata scarf for him—in orange, his favorite color—and had it blessed by two lamas. I carried the scarf up to the summit of Everest and back down. The scarf is now buried with him. I know he was with me on this journey and that he, my dad, and Scott will be with me and beside me always.

Leslie Gullahorn Olson is the surviving fiancée of Sergeant James Scott Bailey, U.S. Marine Corps Reserves and surviving sibling of Captain Greg Gullahorn, U.S. Navy.  Leslie earned a bachelor’s degree at Northwestern University and a medical degree from the University of Michigan and now practices as an orthopaedic trauma surgeon. She lives with her husband, Major Charles Olson, USMC, in Okinawa.

Grief is an arduous journey. But it can be spectacular. On TAPS Expeditions, professional guides lead small groups of survivors while participants develop strength and a support network that will last long after the trip is complete.