I had just hit my stride as a wife and mother of four little boys when my husband was killed in Iraq. Our children were just 6, 5, 3 and 1 years old. The pain was immense. The anger was consuming.

Every part of me wished for the power to will my husband back to life, so I understood completely when my three-year-old son rolled over in bed one night, pointed to the sky and told me everything would be OK because he had just wished on a star.

“I wished for dad to be alive again, and if I wish every night, it will happen,” he assured me. 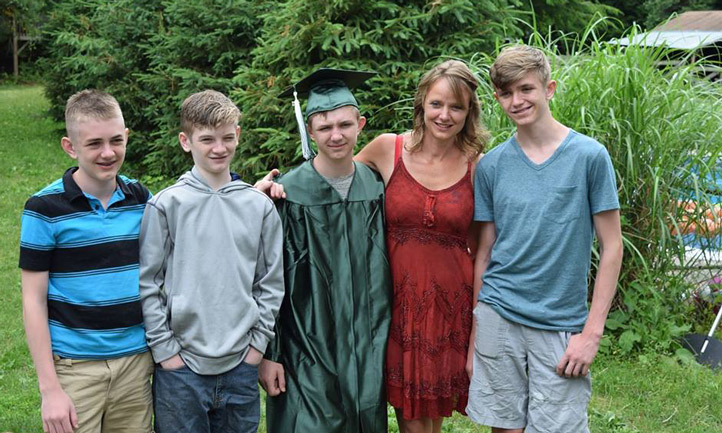 My body and my mind — already in debilitating pain — staggered with this new, cruel blow. Every maternal instinct rushed forward, urging me to find a way to make my son feel better and grant him the power to make his wish come true.

But I had yet to convince myself that I was strong enough to endure this burden thrust upon me. Doubt, fear, pain, anger, and hopelessness had the upper hand at this stage of my life, and my own will felt completely inadequate. For a split second, I almost gave in.

I almost broke under the pressure. I almost succumbed to the pain as the word “maybe” formed in my throat, pushing its way to my lips. But something in me awoke. Some inner force arose until I could almost hear it screaming in my head. I realized that to protect my son from one pain, I would have to hurt him with another. I knew I had to make it absolutely clear in my son’s mind that Lou was gone forever.

“Sweetie,” I barely choked out. My heart was exploding and my vision swimming through tears I refused to release. “I wish that were true too. But Daddy’s body is dead. He can never live in it again, so he will not live here with us again. He’s not coming back.”

I watched my son’s little smile disappear into darkness. His big eyes winced in pain and his hand squeezed mine, as I rushed in to offer what words I could of how he is still with us in other ways, and how we are here for each other, and how I will spend the rest of my life loving him twice as hard, blah, blah… blah.

My words seemed powerless against my son’s pain, but I knew I had to at least try to help him understand because allowing him to hope Lou would come home would be heartless.

I didn’t want to destroy my son’s hope but I knew I couldn’t let him believe Daddy could come home. I knew it was my job as his mother to help him accept the truth, so he was free to move forward.

It was one of the hardest things I have ever had to do, but I am stronger for doing it, and so is my son. By confronting our reality, no matter how painful or terrifying it may be, we can look past it and into the rest of our lives.

Today, my children and I are once again fully engaged in life. We still feel the sting of our loss but are also blessed with abundant beauty, and grateful for each day.

To heal, we had to hurt first. It was not an easy path, but we walked it together and are stronger for it.

From the pen of…Barb Allen is the surviving spouse of Army National Guard 1st Lt. Louis Allen. With strong support from family, friends, and patriotic Americans, she’s raised her four boys into strong young men. Today she’s a veterans advocate, author and co-founder of the inspirational American Snippets, where she’s proud to offer others the same support.