I've heard it said that smell is the sense most closely tied to memory. That is understandable as one of my fondest memories would be going to my grandmother's house and smelling the roast that had been cooking for hours. The meal she would make for us is something I can remember since I was old enough to understand what food was and is now a staple in our adult households. It should come as no surprise this was my brother Jeremy's favorite food too.

When we were kids, the three of us Shank boys were all close. It was easy when we were young and lived in the same house. As we all got older, life happened. As I gained freedom with a driver's license and developed a social circle distinct from my family, we started growing apart. A few years later, Jeremy got his license, and tasted his version of freedom. My youngest brother followed shortly after.

As much as we grew apart, we would all drop our plans if the call came to go to grandma's house. Any squabbles or quarrelling would quickly settle down with one taste of grandma's famous beef roast and brown noodles. The only fighting we would do would be the challenge to see who could eat the most of it. The noodles were the favorite, but the whole meal of the roast with the noodles and gravy was the thing of family legend. 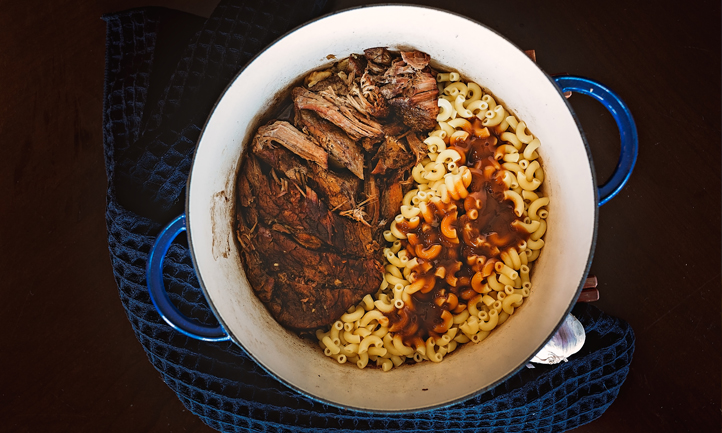 Even now, almost a dozen years after Jeremy died, and after the deaths of my mom and grandmother, that meal is something my family still talks about. My wife was kind enough (when she was just my girlfriend) to cozy up to my grandma and learn how to cook this famous meal. Despite the fact that almost half of my family is gone and we are all spread out geographically, the memory that means “family” to us and reminds us of times we were all together is tied to the smell and taste of this recipe.

1. Prepare roast by letting it come to room temperature before cooking.

5. Once pot has reached high heat (pan is hot when you drop water in pot and it sizzles and evaporates), sear each side of roast until a caramelized crust forms.

7. Check on roast every hour. Juices should cook out and keep meat moist, but if pan is dry, add ½ cup water as needed to keep meat moist but not saturated.

8. After six hours, meat should be cooked through but tender. Remove from pot and set aside.

10. Cook according to noodles’ package directions, adding water as needed.

11. While noodles are cooking, heat up beef gravy in separate pot according to product directions.

12. Once noodles are done, salt and pepper noodles to taste.

13. Cut and serve the roast with the noodles.

If you have a favorite recipe that evokes memories of your loved one, we would be honored if you would send it to us, along with a brief story about why it means so much to you by completing the Share Your Story form or email it to editor@taps.org.

From the pen of...
Chris Shank is a TAPS Survivor Care Team advocate, and is the surviving brother of Cpl. Jeremy Shank, U.S. Army.