We can all remember that special gift — the one we were excited to buy for another. We went to the store with a smile, imagining its recipient’s expression as the package was opened.

In the first two years as a TAPS Military Mentor, Air Force Col. Peter Doty had that experience. He came into the TAPS fold after losing a close friend in the spring of 2010, hoping to carry out the battlefield promise of taking care the families of fallen battle buddies. His very first mentee, Libby, was the surviving niece of a Marine, but she saw her loved one more as a big brother. 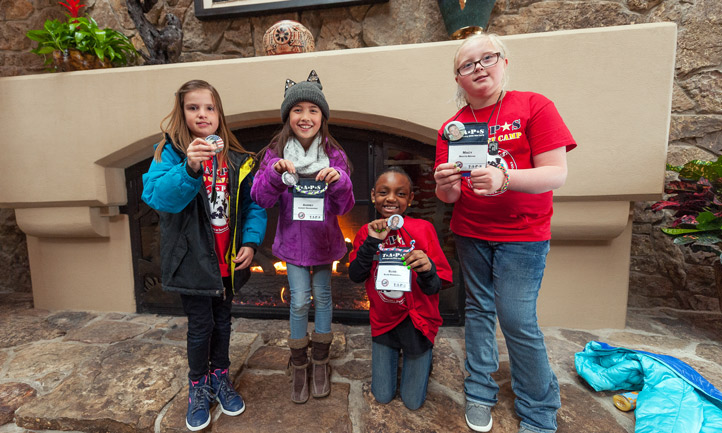 “She was just a sweet kid who cared so much about her uncle and was trying to cope in her own way,” Pete said.

Pete and Libby just clicked. That first Good Grief Camp was a huge eye opener for Pete as he saw the incredible amount of both strength and compassion Libby had. Libby, who has special needs, had so much to give in her relationship with Pete.

“There was an eagerness there to connect — whether it was with me or with other kids.”

Pete was inspired by Libby. Even more than giving back to her, he felt like he was gaining so much from the experience.

“There’s an amazing click that goes above and beyond between a mentor and mentee; they really mean so much to each other,” he said. “And the holidays can reinforce that.”

That Christmas, Pete wanted Libby and her family to continue to feel connected with him and their military family. And, Pete admits, he wanted them all to enjoy a little friendly competition between the military branches too.

From Northern Virginia, where he is stationed on active duty, Pete drove to Quantico to buy his mentee and her sister Marine Corps shirts, but he made sure to include a couple Air Force T-shirts in the package he sent them as well.

Humble, he feels like his holiday gift may not have been that special. But the “TAPS magic” of the relationship between mentor and mentee has lived on through that gift and special text messages. He still maintains the greatest gifts are the kids he gets to see come to TAPS and grow as a result of the care they receive from grief professionals and TAPS Military Mentors.

“To be able to spend a weekend, or a long weekend, with the mix of incredible kids who’ve gone through extraordinarily difficult situations but continue to be resilient and caring to each other...it’s really fulfilling.”

To find out how you can volunteer with TAPS, visit our Volunteer page or email volunteer@taps.org.