As the snow compacted beneath the weight of my heavy boots, I began to cry.

I was tired — exhausted, really — covered in layer upon layer of brand name cold weather gear and yet still shivering from the amount of sweat rolling down my back. Ice crystals formed on my eyebrows and lashes. It hadn’t stopped snowing since I’d arrived three days earlier for a siblings retreat, and there was no sign of it stopping anytime soon. I started questioning my decision to head out that morning. I wanted it to end so badly.

And I realized — this moment symbolized the grief I felt after losing my brother Sam. 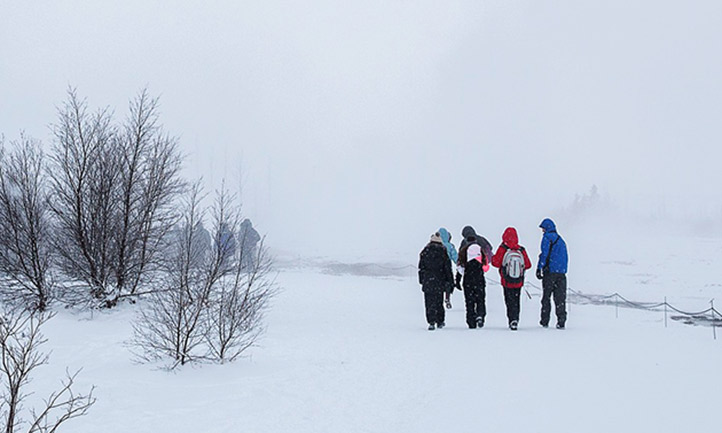 A group of other surviving siblings and I had decided we’d brave the elements that morning and set out in search of what promised to be a beautiful frozen waterfall. With Boy Scouts in the group, I figured we’d be out for an hour, see this picturesque part of the winter scenery and be back in time for some of the finest coffee before the rest of the day’s retreat events began.

We’d been gone three and a half hours. My fingers numb, my nose unable to stop running. I had made myself miserable. I tromped through the knee-high snow, picking my feet up as high as I could get them and fitting them into the places where others had already blazed the trail. Some places I had to twist my feet and ankles to fit. Others, I had to tiptoe to avoid the mounds collapsing around my boots and sending icy cold snow up my pant legs.

And it reminded me of those moments of grief — those ones when you start crying and the tears won’t seem to stop, when every part of your being hurts. It feels as if an actual hole exists within your chest. And yet, you’re the only one who can see it.

It’s as if your world just came to a screeching halt and threw you from a place of safety into some slow motion world of the unknown. It’s a totally different place, where every movement feels like slogging through the snow.

As I continued to trudge on, pushing myself with every muscle that hadn’t seized up in the cold, I picked my head up just a bit. I stopped in my tracks, making the other siblings behind me stop as well for a welcome break. I saw a beautiful tree — waving its branches in the wind and just waiting for me to notice it.

It had lost all its leaves. It was covered by the same never-ending snowfall. Its branches were whipped to and fro, yet somehow it stood out as beautiful. The Aspen stood tall with smooth, greenish-white bark and black marks that accented it. How could something stand out in the midst of so much snow and so much slogging? I couldn’t get over the stark contrast between its beauty and the ugly cry I had going on at that moment. And then I started to notice the other leafless trees around it. This beautiful tree wasn’t alone.

Maybe this could symbolize my grief too.

Maybe I could find strength, not just in myself, but in the others on the journey with me. They knew what it was like to lose someone so crucial to their lives. Maybe I could find a little hope in knowing the footsteps had been laid in the snow already. And with each crunch of my own feet, maybe I could make that next step just a little bit more bearable for someone walking behind me.

Honestly, my revelation didn’t magically make the rest of the hike easier. I didn’t have a renewed sense of purpose or a second burst of energy rush through me. It still hurt to slog. We never even found the waterfall. But I knew I didn’t have to endure it alone, and that made all the difference.

Grief is a journey — a long journey. It can so often appear lonely, but there are others on the journey with us. Sometimes, we need to stop, take notice of what’s around us and find comfort in the companionship.

From the pen of…Kelly Griffith is the TAPS Magazine Editor and Manager of Internal Communications and the surviving sister of Marine Corps Maj. Samuel Griffith. Kelly's background in journalism and the profound impact of Sam's life and service enable her to share the compassion and care of TAPS through writing.