Lori Branch’s commitment to volunteerism runs about as deep as her Georgia roots. Whether she is giving her time and talent to her children’s schools, her neighborhood or her husband’s Army unit, Lori understands volunteering brings purpose and makes a critical contribution to a stronger society. 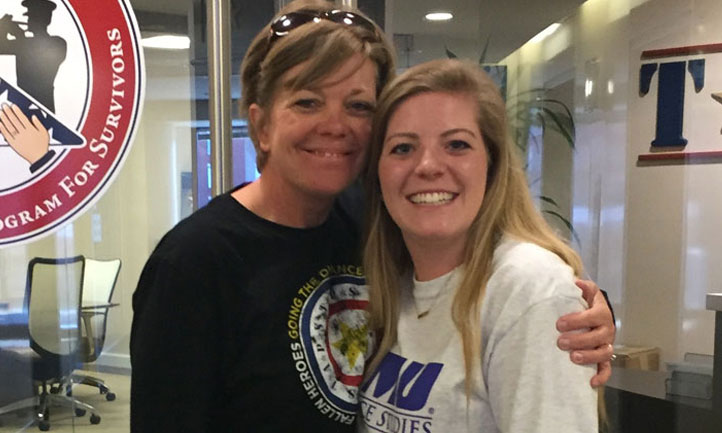 Lori has volunteered with numerous organizations throughout her life. Having completed training to serve as a Good Grief Camp Mentor, her husband David continued to receive email notifications about volunteer opportunities with TAPS programs. It was his recommendation that thankfully brought Lori to volunteer with TAPS in 2015.

After multiple moves between Ft. Belvoir and Ft. Gordon, Lori and her family transferred once again to the Washington, D.C., area. With her husband away on a year-long deployment, and the task of planting roots once again at a new duty station, Lori knew she had to get connected to something that gave her purpose.

Lori first volunteered with Team TAPS during a thank you note service project. Lori and six others completed handwritten notes of thanks to participants in the Army Ten-Miler and the Marine Corps Marathon. Through her volunteer service, Lori gained a better understanding of the connection and inclusivity TAPS provides.

Like many TAPS volunteers, supporting our survivors became a family affair for the Branches. Lori assembled care packages for newly grieving families with her daughter Emma, placing a TAPS quick series guide on suicide loss in each package. “We probably filled over 100 care packages that day. It was eye opening.” Lori was reminded of the great diversity of those affected by military loss, and how TAPS programs reach across the chasm of grief to offer survivors hope and healing.

Volunteering with a neighbor, Lori made paddle fans with photos of fallen service members for the Inaugural Parade this past January. She was struck by the number of loved ones represented. With each photo, she put a face to a name.

Lori’s connection to TAPS deepened while speaking to a friend whose brother died in Afghanistan in 2011. Her friend shared how TAPS had been instrumental in helping her work through her grief. Her friend received anniversary cards, just like the ones Lori helped mail during another service project. Together, in October 2016, they participated in the Marine Corps Marathon 10K, honoring her brother through Team TAPS. Through her volunteer service, Lori built bridges between TAPS and surviving families and her friend all at the same time.

Lori’s volunteer work is part of who she is. By serving others, she finds purpose and connection to her community. While Washington, D.C., may not be quite like her home in Georgia, TAPS is glad Lori is growing deep roots with us.