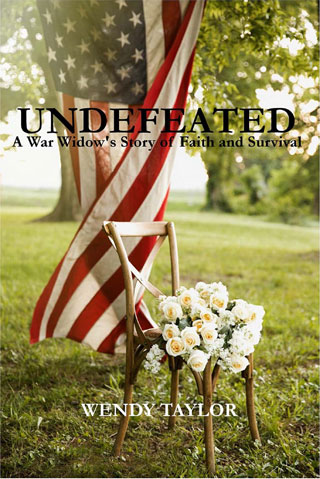 As reports of a U.S. Military KC-130 plane crash began inundating my news feed, tv screen and radio earlier this year, I felt the crushing weight of my grief once again. Pictures of the aircraft were catastrophic; I understood what they meant for those families who were just opening their doors to devastating words. My own memories of painful moments resurfaced and a flood of emotions smothered my spirit.

On Jan. 20, 2007, I became a soldier’s widow. My husband, Maj. Michael Taylor, was killed when his Black Hawk was shot down in Iraq. All 12 passengers died that day.

When your husband dies, no one can truly prepare you for the obstacles ahead. Even as I fought to survive and to move through my grief, there were always hurdles to confront. I barely made it over one hurdle before another presented itself. Things I never considered before became a source of pain and despair. Everyday events now opened new wounds, like not having Michael accompany our daughter Meredith to school father-daughter events; she would never dance with her dad again. Or knowing Michael would never be in the stands to watch our son Justin play baseball. He would never coach one of Justin’s teams. I found ways to avoid the pain of those events and learned ways to get through them with as little hurt as possible. I didn’t shy away from checking out the kids early from school to keep them from the sadness.

Still, there are times when the hurt envelops me. The media can still trigger unwanted flashbacks of the casualty notification officer coming to my door to give me the news, the wailing of my children as I relayed the horrific news to them and all the effects Michael’s death has had on us since. News coverage of a tragedy resembling Michael’s death can cause me to stumble backwards in my grief. My mind, body and soul falters under the agonizing weight of the suffering.

On one Monday afternoon, sitting in front of my computer and seeing other families’ worlds fall apart so suddenly in the news, I could only let the waves of my own grief come. As they overtook me, I had to re-acknowledge my own loss. This is, in fact, real for me. And in the moments when this fact makes me once again pause and sit in my grief, I have to lean on my support system.

As difficult as the reminders of Michael’s death are, there are also reminders of the love he left behind. My husband planted seeds of compassion, true friendship and leadership while he was here, and those seeds have bloomed. The harvest of his good deeds now comfort our children and me. Michael’s Army brothers would drop by on their lunch breaks to check on us and to see if we needed anything. They did house repairs and yard work on a daily basis. Many left gifts on the front porch: baskets of food, handmade trinkets, gift certificates and even Christmas presents. The kids and I received blessings like that for a solid year, and we continue to feel the love of so many.

Once I decided to survive, I eased my way back into life. I told myself every morning to put my feet on the ground, get my children ready for school and drive them there. If the grief hit me hard one day, I learned to allow it to take its course, and I waited for it to pass. I had to remind myself to eat and keep my strength so I could care for my children. I opened the blinds, even just a little, to let the sunshine in. And I realized the importance of never, ever giving up. I found purpose in so much of my grief. I found that we’re capable of so much more than we ever realized. The world can and will seem pretty again, and instead of crawling through life, I believe we will walk and eventually run. I know it seems impossible, but it can happen in our own time - no one else’s. Our grief is ours alone. We move through it in our own way and at our own pace. The sun will shine again one day when we least expect it.

In the throes of what feels like eternal darkness, it can feel so lonely. And it’s difficult to acknowledge that I will always feel my loss, that this pain will stay with me for the rest of my life. But it’s comforting to know the love will remain too. Michael was my soul mate, my best friend and my first love. I will try to live as well and as graciously as I can until he takes my hand again.

From the pen of…
Wendy Taylor is the surviving spouse of Army National Guard Maj. Michael Taylor, who was killed in action in January 2007 when his Black Hawk was shot down by enemy fire. She recently released her book, "Undefeated: A War Widow’s Story of Faith and Survival." Find out more at privatesorrow.com.