Grief is one of the most difficult things we can endure. And If we allow it, grief can become all-consuming and even self-destructive. When my fiancé John McNulty, a civilian contractor and K-9 handler, died by suicide, the ground beneath me disappeared. I was disoriented and collapsed internally – questioning: Was it my fault? Was it something I did or didn’t do? The life I knew was eclipsed by darkness and inconsolable sadness. I faced the seemingly impossible: learning to live and function in a new reality that confronted me. 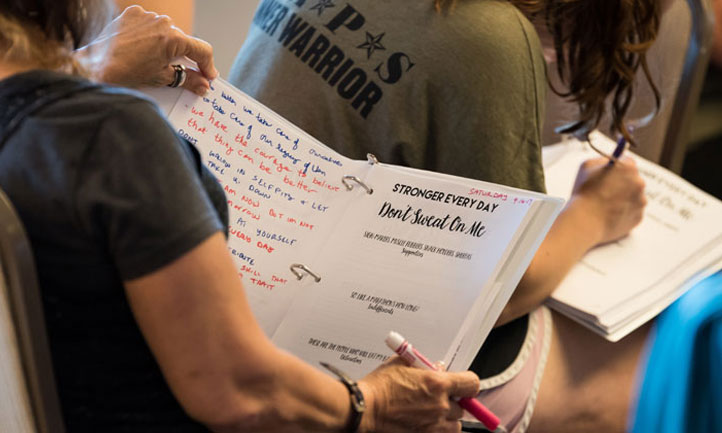 This was accompanied by overwhelming uncertainty, shame and isolation. I blamed myself for not knowing John needed help. I blamed John for not saying goodbye. I blamed the world for seeming empty and purposeless now. Stigma tarnished the opportunity to say John’s name, and I found myself not wanting to talk about my loss, for fear of having to explain the manner of his death.

John was a wonderful man, who had a strong affinity for the dogs he trained. He lived a life of honor and service. And cared deeply for those closest to him and the job he was doing. He was my best friend. I wanted people to remember him for that.

I thought the word “suicide” dishonored his memory and negatively defined him. But, the pain of being unable to express my loss ultimately shut down my ability to communicate. My world fell silent, as I couldn’t face what happened. I spent my days doing absolutely nothing – avoiding everyone and every responsibility, except caring for my dogs.

I sought solace in food. I started leaving my house, but only to buy junk food or take-out. There was no one to hold me accountable or show me how I was hurting myself. I pushed everyone away; I was alone. Eventually, I was almost 100 pounds heavier – perpetuating feelings of self-doubt and shame for not being stronger. Grieving, eating poorly, weight gain and isolation, became cyclical; it was like a black hole.

But when I heard,“morbidly obese,” after a routine checkup, I had a new reason to grieve: I’d lost myself. How had I allowed my grief over John’s death to envelop my entirety? How had I stopped loving myself? The new grief of losing myself compounded my grief for John.

It is sobering when you realize you’ve created the exact opposite of what you need. I realized I needed to know if I was still in there somewhere. I had to find myself again.

I decided to attend a TAPS Inner Warrior Wellness Weekend. The new phrase, “Inner Warrior” sparked the belief that just maybe, I had an inner warrior too. But not without trepidation. I don’t know how many times I almost cancelled.

But, the day came and, grateful for the opportunity, I pointed my car in the right direction.

During the wellness weekend, I listened to other surviving family members’ stories. And after so much harsh self-talk for so long, I was finally in a group of people who weren't judging me. They understood. Suddenly, I had fellowship, physical challenges and a workbook to guide me. Most of all, I felt like I had resources. And those resources became hope. I confronted the truth I had spent the previous year evading. I realized the circumstance of John’s death did not dishonor him; the dishonor I felt came from temporarily giving up on life and losing my old self.

As the weekend progressed, my pattern of negative self-talk lifted, and my inner warrior began to shine through. On the last day, my perspective shifted during a darkly lit yoga session. As the instructors distributed candles, I realized the small flame surrounded by darkness was my resolution; I needed to go through grief and not evade it.

After the wellness weekend, I followed the workbook and did some soul searching. I realized I needed formal grief counseling and sought help. It became one appointment I had to keep every week. Then, I started making appointments with myself for activity. I got my hands on every nutrition book I could find. I didn't want a diet; I wanted to be healthy. I felt I needed to apologize to my body for all the junk food.

I no longer eat processed foods, and now, I keep my fats healthy and incorporate lots of veggies. It’s amazing to see how much food affects mood and mental clarity. Just giving up junk has helped me gain more focus and intent with self-care. The road to recovery was not easy, and old habits are difficult ignore. In spite of this adversity, I have lost 85 pounds and surrounded myself with new hobbies, like obstacle-course running.

I credit the TAPS Inner Warrior Program for my health and wellness today. It equipped me with the tools to take on challenges and rediscover the beauty of life. Most importantly, it supported the journey to find my inner warrior.

My life now is a stark contrast to the deepest, darkest parts of my grief from losing John and myself. That woman is still there, she just looks and feels different and stronger; as if the calluses on my feet mirror the ones on my heart. I fully embrace every opportunity in life now and know you can still have true gratitude, even in grief.

Finding healing and understanding after the trauma of losing a loved one doesn’t happen overnight. The process of healing can’t be rushed. Grief will always ebb and flow in my life, but it no longer defines me. Despite the almost intolerable anguish I endured, my inner warrior led my fight back into the world and forever shifted my perspective.

Moving forward, I hope to help others with their battles in grief. There is life after the death of someone you cherish. Both lives don't end in that moment. Just doing your best every day and looking for goodness in it, makes a difference. I believed I had failed John for a long time. But now, I understand that his decision had nothing to do with me. I could never have changed his mind. I will never understand it, but I can move forward in a way that will make him proud. And the biggest part of that is being a resource, a listener and an example that there is an inner warrior in each of us.

From the pen of…
Sharon Forbes is the surviving fiancée of civilian contractor John McNulty, who died by suicide in 2015.  A former nurse, she is now a civilian K9 handler and evaluator and the owner of a working dog training and rehabilitation facility – a dream she and John shared. She is a Peer Mentor and shares the benefits of personal wellness, and canine companions, on the grief journey.