In 1996, my father Capt. Donald Lee was the Army’s Outstanding Aviator. A year later, he and his co-pilot were killed in a training accident when their helicopter crashed. My mother Theresa, my then 5-year-old brother Sam and I, age 7, had our lives thrown into turmoil as our family and the Fort Hood community dealt with this loss. By the end of that school year, we were moving to Northern California where my mother’s family lived, saying goodbye to not only our friends and neighbors, but the broader military family in which we had lived for many years. 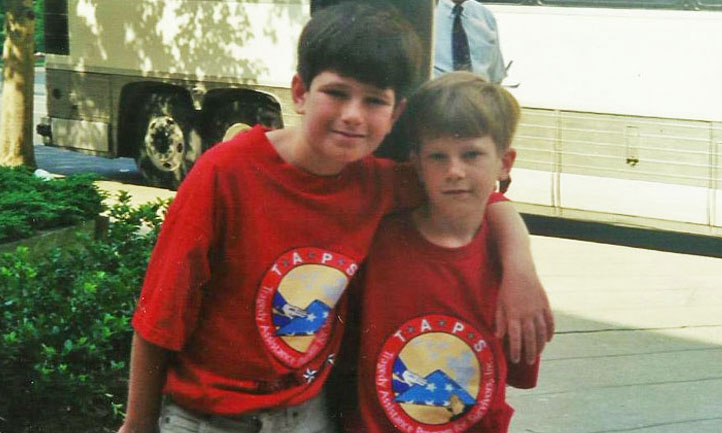 Not long after our move to California, we learned about TAPS and found we could connect with other families experiencing the loss of a loved one who served. The three of us left for Washington, D.C., and the experience of our first TAPS National Military Survivor Seminar and Good Grief Camp. This would impact all of us in our own way for years to come.

I learned there were other kids dealing with similar challenges of losing a parent in service. In California, we had a loving family and a supportive community, but nobody truly understood. For a long time after my father’s death, I tried to minimize any attention on the subject or avoid bringing it up altogether. I had gone so far in my personal reaction to grief that I told my teachers my dad didn’t live with us because my parents were divorced. The TAPS Good Grief Camp was the first real opportunity I had to feel comfortable talking about my father – sharing his story, honoring his memory and expressing how his loss impacted me.

From that first camp, my grief journey has taken many turns. Today, I am a Captain in the Air Force, and I have a child of my own. And yet, almost 20 years later, I still grieve the loss of my father in my own way. I keep his flight suit patch in my office and his monogrammed pen in my pocket as constant reminders of not only his service and our family’s sacrifice but the incredible responsibility of service members everywhere.

Most recently, that journey has brought me home to my TAPS family where I’ve had the incredible opportunity to contribute another form of service to families of fallen service members — families just like my own. Nearly 20 years after my first Good Grief Camp, I now get to pay back some small piece of the incredible benefits I received from TAPS by mentoring kids who now stand where I once stood. They honor their lost family members who served while trying to find their new place in the world. While my roles as a father, husband and military officer give my life tremendous purpose, there still is nothing comparable to the feeling of bonding with these amazing kids. I am honored to be a TAPS Military Mentor, having experienced the pain of my own loss and the privilege of mentoring the campers experiencing theirs.

As a kid, Good Grief Camp was a safe place to share my story, honor my father and join a community of kids who shared some of my same fears and struggles. Today, Good Grief Camp is a place to bond with these kids, listen to their stories, help them honor their loved ones and show them that even big kids like me still feel sad, and it’s okay to miss that person forever.

Anyone who has one of these kids in their lives — as a parent, guardian or mentor — knows how resilient, caring and emotionally intelligent they can be. As a TAPS Military Mentor, my job is easy. I listen, I share, I play and, most of all, I am present for the child so that whatever he or she needs from me, I can try my best to provide. The interactions I have with my mentees are incredibly rewarding. I watch them grow over the course of the camp in ways I never thought possible. I watch as they support and take care of one another. These kids have been through so much, but their tenacity and spirit inspire me every day, as they do for the hundreds of other mentors who return to TAPS year after year.

Coming back to Good Grief Camp as a mentor is never easy. I still struggle to feel comfortable sharing my father’s story, and I am constantly challenged in new ways by discussing my grief, but the meaning I have found as a mentor makes it all worth it. Whatever nervous anticipation I feel before camp disappears as I am greeted by friends, old and new, and welcomed back once again into the open arms of my TAPS family. Mentoring other children who wear the red shirt I once wore and who fill the places I once filled is one of the greatest honors I have ever experienced, and it adds an extraordinary sense of purpose to my life.

From the pen of…
Capt. Nathaniel Lee is the son of Theresa Lee and the late Army Capt. Donald Lee, who was killed in an aviation accident in 1997. Nathaniel commissioned into the Air Force in 2013 and is currently stationed in Colorado Springs, Colorado, where he lives with his wife and their daughter.