In the years since my husband’s death in Afghanistan, I have often wondered what is happening in their country and how the people are doing. A friend reminded me not to connect Mark's death with Afghanistan's successes or failures, and he's right. Another buddy reminded me that the soldier's first and foremost call is to protect and serve the Constitution of the United States; second, to protect and serve the men and women in uniform; third, to help the people of Afghanistan. While I knew my friend was right, questions kept surfacing. 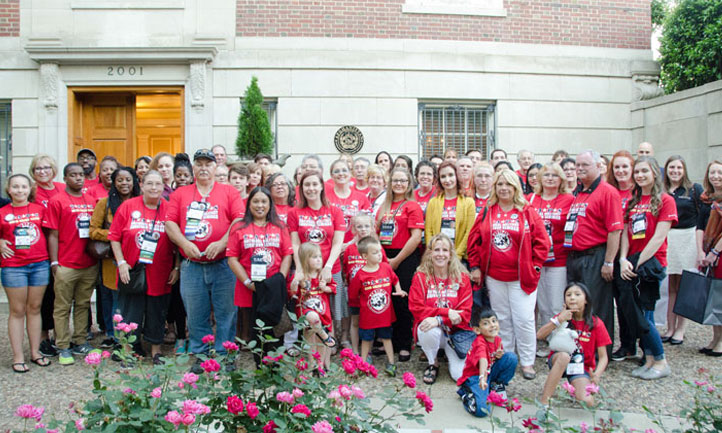 On the eighth anniversary of Mark’s death, my questions were answered. Afghan Ambassador to the United States Dr. Hamdullah Mohib extended an invitation through TAPS to surviving families who lost loved ones in Afghanistan to attend a special dinner at the embassy, and I jumped at the opportunity.

As I entered the Embassy grounds, I stood face to face with people from the foreign land where my husband died. I moved forward, hopeful and with purpose. The Ambassador’s wife Lael and staff welcomed us into their home. Apologizing for the ambassador’s absence, his wife shared that his mother died, and he flew home to be with family. No one understands loss like our TAPS family.

Formal speakers representing the Afghan people expressed their gratitude to our men and women in uniform and spoke of the progress made in their country. While there is a long road ahead, the Afghan people continue to fight for their nation. Since the United States entered Afghanistan in 2001, the life expectancy has extended 20 years (from age 43 to 63). They've had 13 years with their new democratic constitution. Where once women were not allowed to leave their homes without a male family member, women are now running their own television shows. Their country has more women in Parliament than ours has in Congress. The literacy rate jumped from 9 percent to 39 percent. In 2024, they expect 60 percent of the population to have the ability to read. Wheat production has increased from 1.5 million tons to 3.1 million because of advances in irrigation.

The Afghan people wanted us to know, "We will stand for the values [your lost loved ones] fought for. We will defend the values they fought for." Perhaps the most heartfelt moment was when 7-year-old Yusra said our loved ones “saved her country’s tomorrow.” Hearing this, I quickly blinked back tears that were close to falling. My heart felt fuller at the end of the evening as I absorbed these words.

Does Afghanistan have a struggle in front of them? Undoubtedly so. Will I, my children and the TAPS family continue to miss our loved ones? Unequivocally, yes.

Yet I hold on to a ray of hope that good triumphs over evil. I am thankful my husband and the loved ones of others heard that call and answered it. They lived extraordinary lives and went to extraordinary measures for us. They've impacted countless lives for good, and for this, their service sees no end.

From the pen of…
Jennifer Stratton is the surviving spouse of Air Force Lt. Col. Mark E. Stratton II, who was killed in May of 2009, along with Sr. Airman Aston Goodman and 1st Sgt. Blue Rowe. Jennifer and her three children reside in Virginia, where they try to live their best lives and help others to fulfill Mark’s legacy.