Since Army Capt. Joe Quenga began volunteering with TAPS in May 2016, he has recorded nearly 130 hours during 11 events, ranging from mentoring youth at the National Military Survivor Seminar and Good Grief Camp to service projects at the TAPS headquarters office. Whether he’s packaging TAPS Christmas ornaments or spending time with his two-time mentee, Joe’s commitment to both surviving military families and the TAPS mission is clear. 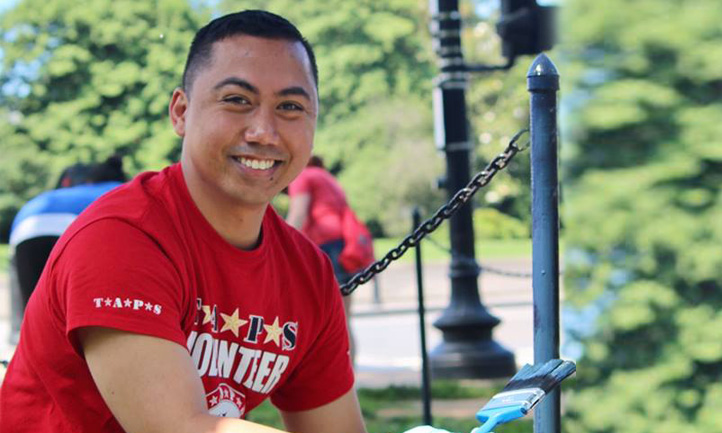 Joe served with the late Master Sgt. Pablo Ruiz III in the Army where they forged a strong working and personal relationship. Pablo’s volunteerism with TAPS, from 2013 until his tragic death in May 2015 while serving in Afghanistan, was an inspiration.

Before Pablo left for his final deployment, he made it clear that should he not make it home, donations were to be made to TAPS in lieu of flowers for his funeral. He wanted others to volunteer with TAPS as well. He also wanted to have TAPS represented at his funeral. As Pablo’s brother-in-arms, Joe made sure his friend’s final wishes were granted. Upon meeting Joe, TAPS President and Founder Bonnie Carroll invited him to take part as a TAPS family member. Joe pledged to step into the position left by Pablo and answer the call to serve.

Joe developed an ambitious plan – to honor Pablo’s legacy through volunteering for “every single event” with TAPS that Pablo did, all within a year.

Joe dove in as a Good Grief Camp Mentor at the 2016 TAPS National Military Survivor Seminar and Good Grief Camp. He completed service projects and volunteered at events with TAPS partners and supporters, like the Yellow Ribbons United and the Washington Wizards. Just as Ruiz had done before him, Joe joined the Courage Caps campaign, with proceeds going to TAPS.

He helped the Baltimore Ravens training camp when they visited wounded service members at Joint Base Andrews and Walter Reed National Military Medical Center. Joe volunteered at the Washington International Horse Show and the annual TAPS Honor Guard Gala. While Joe worked toward his goal, he also shared Pablo’s story.

It was difficult the first time he shared the story of what brought him to TAPS during a Good Grief Camp Mentor debrief, but he got through it.

By sharing the story of Pablo and TAPS, Joe has forged connections and found healing. He now writes short stories, blogs and news articles. “Every time I can tell Pablo’s story and the TAPS story, I try to share.” This year’s TAPS National Military Survivors Seminar and Good Grief Camp debrief was different. Joe felt comfortable sharing why he chose to volunteer. “I thought it was me giving something to TAPS in [Pablo’s] memory,” he said, “but it turned out [volunteering] helped me express my feelings about the situation. I didn’t know that was going to happen.”

As Joe’s first year of volunteer service came to an end this May, he reached his goal. He even created a living tribute to his friend’s memory. At this year’s National Military Survivor Seminar, Joe presented Bonnie Carroll with a check for $1,000 to fund a legacy scholarship in Pablo’s honor. The award will go to a graduating senior from the TAPS Good Grief Camp. Joe plans to continue this mission, working with donors to make the scholarship annual. Already, his efforts have raised $5,000 towards the scholarship award for 2018. This level of service is the essence of Joe, and it’s also the heart of TAPS. Thank you Joe for stepping forward to help us care for families of America’s fallen heroes.