Long before surviving military families walk through the doors at the Crystal Gateway Marriott, staff and volunteers start transforming the hotel into a welcoming space for the TAPS National Military Survivor Seminar and Good Grief Camp. It takes more than 750 volunteers to set up and help staff at the annual event in Arlington, Virginia. From packing backpacks for Good Grief campers and mentors to folding nearly 3,000 red TAPS t-shirts for check-in, and a million hugs in between, these dedicated and selfless volunteers spend a combined 17,142 hours over Memorial Day weekend, ensuring our families receive the healing support they need. 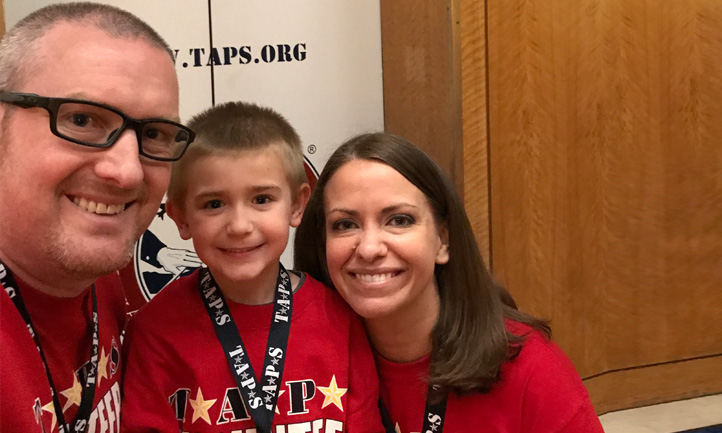 TAPS relies on a mix of individual volunteers, corporate volunteer groups and military mentors to fill all the volunteer needs during the seminar. TAPS engages corporate sponsors by encouraging them to provide employee volunteers throughout the weekend. This not only helps TAPS meet vital staffing needs, but also helps bring financial donations to life by providing an opportunity for donors to see the impact of their service and support from an intimate vantage point.

During the 2017 memorial day weekend, Area Finance Officer for Aimco Jarrett Pohle worked the Good Grief Camp Zone, Field Day USA and the Sunday TAPS Good Grief Camp luncheon. He also volunteered along with his wife, Michelle, and his 5-year-old son, Gregory, to set up for the TAPS Family Banquet.

The Pohle family has a rich history of military service. Michelle’s brother was a combat medic in Iraq, and her dad served 30 years as a Naval officer. It was important for Jarrett to show his son the value of giving back to others and highlighting their commitment to supporting service members and their families.

As a first time TAPS volunteer, Jarrett was committed to helping make Aimco’s monetary donation go further. He believes, “Money goes a long way, but willing hands really help make an even bigger impact from an original donation.” He watched as staff and volunteers turned around a new plan on Sunday for the Good Grief Camp luncheon. “Having volunteers on site made the response seamless so that kids and military mentors at the luncheon never even noticed the last-minute changes.”

Instead of seeing only the general mission of TAPS, Jarrett and his family witnessed the eye opening transformation and resilience of children who lost a parent in military service. As a parent, it was hard for Jarrett to fathom his son suffering that kind of loss. Personally seeing the impact TAPS makes on grieving children was humbling and the TAPS mission is real in a new way for the Pohle family.

Now, when Jarrett heads back to the office, he can share his personal understanding with co-workers and executives to measure the benefit of Aimco’s support for TAPS. He hopes to increase awareness of TAPS volunteer opportunities to encourage his colleagues to continue stretching the value of Aimco’s corporate donation.

Like Jarrett, hundreds of corporate volunteers helped maximize their organization's support of TAPS over the Memorial Day weekend. No job was too small. Many did the heavy lifting and unglamorous jobs. The reward was in knowing they made a difference in the lives of families who have sacrificed so much for America. And in the hugs, because every TAPS event begins and ends with hope, healing and plenty of hugs.

Visit our volunteer page for more information on getting involved with TAPS.