The last mile was the most painful, physically and mentally.

I tried to keep from dwelling too much on my dad for the first 24 miles of the race in fear I’d break down too early and lose the energy I needed to finish my first marathon. But once my blistered body hit the 25-mile marker, I let the tears and the memories flow. My salty tears mixed with my sweat and were quickly washed away in the steady downpour of rain that, like the tired runners surrounding me, never gave up on that cool May morning. 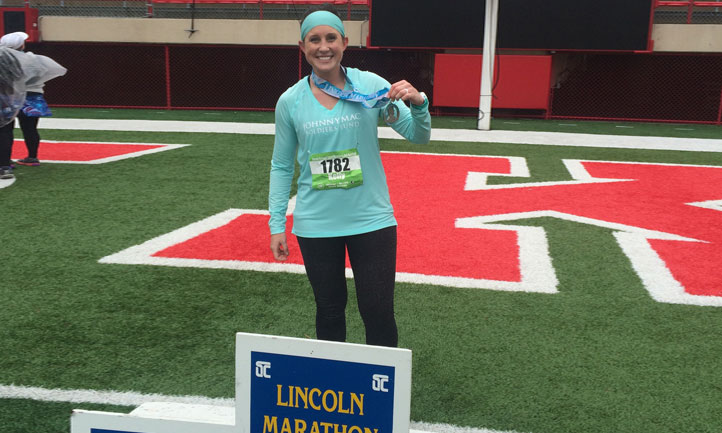 My dad, Army Col. John McHugh, ran this path before me. His blistered feet and tired body pounded this same Nebraska pavement 16 years before mine had. It had been nearly six years since a suicide bomber took his life in Kabul, Afghanistan, but in running one of the same marathons that he ran, I felt I was able to finally share something with him again. For the first time since his death, I felt like I was making a memory with him.

During his 46 years, my dad ran three marathons: the Lincoln National Guard Marathon in Lincoln, Nebraska, the Blue Angel Marathon in Pensacola, Florida, and the München Marathon in Munich, Germany. Running was a passion that he and I shared, and I always dreamed that one day we would run 26.2 miles together. I was 18 years old when he was killed in action on May 18, 2010. We never had the chance.

I remember the first time I woke up early to go running with my father. It was during my freshman year of high school and my family was stationed at Fort Rucker, Alabama, the Home of Army Aviation. Though I had run numerous 5Ks and Fun Runs on post with him and my siblings, this run was different. When I awoke at 5 a.m., I could hear the faint humming of soldiers chanting in unison outside my window. I stumbled out of my twin-sized bed and slid on the shorts and t-shirt I had laid out the night before. If I wanted to join my dad for physical training, I had to get up early. I remember racing down the hallway in my socks to find my dad sitting on our living room floor, stretching. I laced my sneakers and sat on the floor next to him.

It was still dark when we walked out of our carport door and into the cool spring morning. The cicadas had long stopped their nightly chirping, but the birds were yet to awaken and begin theirs. The only sound was the hum of groups of soldiers as they trotted down our sleepy street in their grey t-shirts with ARMY written in big, bold reflective letters on the front. Numerous roads on Fort Rucker were closed Monday through Friday from 5 to 7 a.m. for this post-wide fitness session, and I felt like a grown up joining these soldiers in their training. I don’t remember how far my dad and I ran that morning,
but I do remember how we chatted the entire run and that I never put in my headphones to listen to the new music I had added to my MP3 player the night before. That run was the first of many we’d set out on together through Fort Rucker before we moved to Carlisle, Pennsylvania, then to Fort Leavenworth, Kansas. It was at Fort Leavenworth where I’d run with my dad for the final time. But I don’t remember the last run with him like I remember that first run.

Following his death, I used running as a way to cope with my loss and keep my emotions at bay. During the summer of 2010, I ran three miles every morning around Fort Leavenworth, always finishing my run at the cemetery. Jogging, biking, dog walking and loitering are not permitted on the Fort Leavenworth National Cemetery grounds, but I ignored the big, rusted sign at the cemetery’s entrance every morning as I finished my daily runs at his marble white headstone. Some mornings, I’d do pushups or sit-ups on the well-kept green grass surrounding his grave. Some mornings, I’d stretch my legs and cool down while looking out over the thousands of identical rounded headstones. Some mornings, I’d cry.

It was after one of these runs as I was lying in the grass at Fort Leavenworth National Cemetery where I came up with the idea to run the same three marathons that my dad ran, and though it took me six years after his death to muster up the courage to sign up and train for one of these races, nothing compared to the feeling of running and finishing the Lincoln Marathon, just like him.

When I looked into the Blue Angel Marathon, I was faced with a dilemma – it no longer exists like it did when my dad ran it in the late 1990s. The Blue Angel Marathon is now the Blue Angel Rock N’ Fly Half Marathon, and that’s just not the same. While I still hope to run the Rock N’ Fly Half, I decided to make a change to my three-marathon plan by substituting Pensacola for something else, for a marathon my dad dreamt of taking on but never had the chance – the TCS New York City Marathon.

Through Team TAPS, I am able to make this dream a reality. I recently moved to New York City where I’m pursuing my Master of Fine Arts in Creative Writing at The New School, so I have seen and felt the pride of this historic race first-hand. Having the opportunity to be a part of it because of TAPS is a dream come true. I can’t wait to run through the streets of New York City this fall alongside fellow survivors as we celebrate and remember the lives of our loved ones who paid the ultimate sacrifice for our freedom.

My dad’s memory carried me through my first 26.2 miles in Lincoln, Nebraska, and I know it will do the same this November through New York City’s five Boroughs. Then, one of these days, I’ll make the trip to Munich, Germany, and complete my own trio of marathons. Just like my dad.