We have lots of choices in life. We choose what job to have, where to live, who we want to be. Every day we make choices both big and small; the choices are all around us. But when it comes to grief, it can feel like there is no choice. 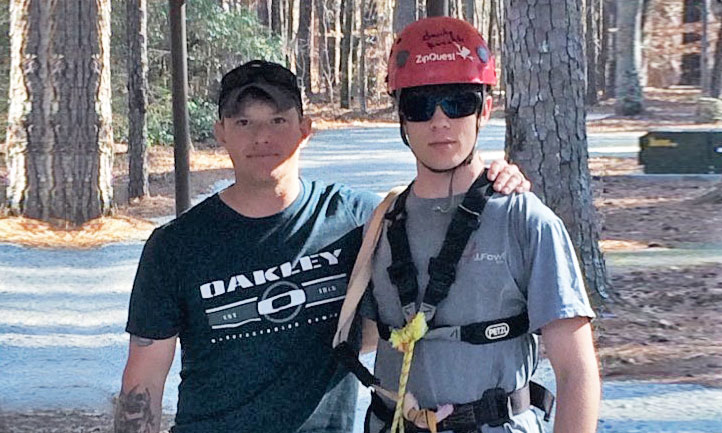 Grief is thrust upon us, and I don’t think anyone takes it well. I know my family didn’t. I’ll never forget the phone call from Keith’s dad. “The DoD just left my house,” he said a few times before I told him to explain. “Laura, Keith was killed. He isn’t coming home.” Grief totally consumed my children and me after my stepson, Army Cpl. Keith Essary, was killed on Jan. 8, 2009.

My daughter Brooke, a teenager at the time, tried very hard to hide her feelings. She felt she had to keep it together because everyone around her was falling apart. My then 10-year-old son Randy was angry, frequently arguing and back talking. I wanted to help them, but I wasn't sure how. I could barely help myself. Our family was going through this grief journey together, but at the same time, very much alone.

Nearly six months after Keith’s death, we learned about TAPS. Not quite sure what to expect, I talked Randy into attending a Good Grief Campout at Fort Campbell, Kentucky. I convinced him it would be like Boy Scouts. Brooke and I made plans to stay at a hotel nearby for the weekend so we would be right there if Randy decided to leave.

When we dropped him off, we were met by the most amazing group of people. Brooke even made the spur-of-the-moment choice to stay for the weekend. When I left my children to go to the hotel, I felt some hope. Somehow, I believed my children would find some peace and some healing. I was so happy when I picked them up and realized they had. That weekend, they were surrounded by others their age who knew exactly what military loss feels like.

We attended another TAPS event in February 2011 at Redstone Arsenal in Huntsville, Alabama. My former mother-in-law, whom I still consider close family, was stationed there as an active duty Army National Guard nurse, and the family of the soldier who was killed in action with Keith lived just a few minutes away. I made friends at that seminar, and I’m still connected to them to this day. To be with people who totally understood the things that I was feeling, even when I couldn't communicate them, was such a relief.

But the best part has been Randy’s experience. He first connected with his military mentor and other soldiers at the Good Grief Camp. And that mentor changed Randy’s life. The two laughed and played and talked all weekend long. Randy, Brooke and I joined the soldiers for Saturday evening bowling that weekend. They treated Randy like he was just one of the guys. Since Keith was 10 years older than him, it was like watching my sons spend time together. Many years later, we still talk about that night.

The relationship didn’t end there. Randy and his mentor exchanged phone numbers. I became Facebook friends with the mentor’s wife. And in the last six years, we’ve had countless phone conversations, texts and Facebook messages. We’ve sent Randy’s mentor care packages and letters when he was stationed overseas. His mentor gave advice and was a listening ear so many times when Randy needed a big brother. He even calls Randy on his birthday every year. It means so much to us, and my son truly loves him.

As each grandchild has graduated from high school, my mother-in-law has taken them on a trip anywhere in the world they want to go with her. She and Keith had gone to France and England. Brooke chose a coastal tour of Ireland. Randy was able to take his trip this past February. His choice was to visit his mentor and family at their home. Being back with his newfound big brother, Randy went indoor skydiving and zip lining. They had the best time.

On that bitter cold day in January 2009 as I stood on the tarmac of our local airport and watched Keith's flag-draped coffin come home, no one would have been able to convince me that any good could come out of our tragedy or that I had a choice in my grief. After eight years, I can look back and see the difference that TAPS has made in our lives. Without TAPS, and all of our fellow survivor friends and the mentors who have touched our lives, we would no doubt be wishing to have a place to belong. And without his mentor, I know Randy's life would not be the same.

That first camp my children attended was a choice. It was my choice to turn to TAPS for help, my son’s choice to be open to the idea, my daughter’s choice to stay even though she hadn’t planned on it. We all made choices that weekend. We were exhausted, and we each made a choice to make a change.

You have the same opportunity to make a choice. Although TAPS didn’t make our grief go away, it continues to help us along in this journey. It’s a journey I don’t think will ever end, but I’m glad I don’t have to go alone. And I’m glad I made the choice to grieve.