When Angela and I attend TAPS events together where nametags are encouraged, we get strange looks. We share a last name but don't look anything alike. We get a lot of questions, usually along the lines of, "Are you two sisters?" 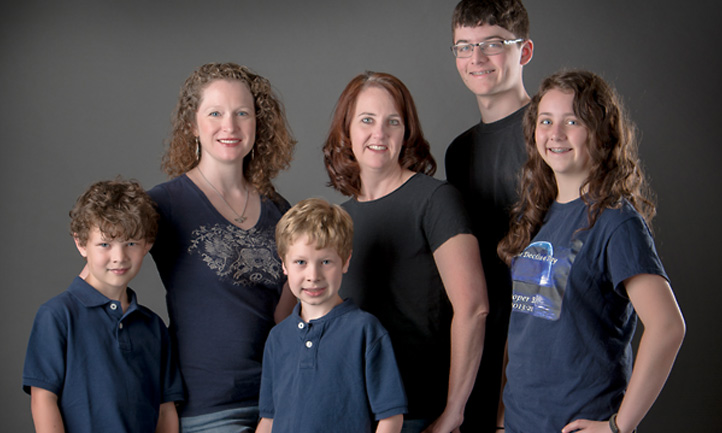 We both enjoy smiling and then responding, "Nope. We were married to the same man." Sometimes we explain it was at different times. Sometimes we don't. It's fun either way.

It may seem like an odd situation, the first and second wife being friends, but odd or not - we are both very grateful for our relationship.

We all have special names for each other. The kids have the easiest time with the titles. Half brother and half sister are just replaced with Corbin, Gillian, Max and Roanin. They have always considered themselves siblings, so nothing has changed there. Her kids, officially my stepkids, have always been my "Bonus Kids" because step kids didn't quite express how much I love them. They've called me August since they were little, so that's easy.

Angela's title, however, was a harder challenge. My kids had called her Miss Angela for years, but as all our relationships grew closer that stopped feeling right. Finally, a few years ago, Max came up with the perfect title. If Corbin and Gillian were his half siblings then their mom should be his half mom. When he said it, we all laughed and then agreed it was a good solution. It also rolls off the tongue easier than, "my dad's first wife."

It's an amazing situation, and one I think is fairly unique. Though it didn't come without heartache, and although it took all of us losing Dave to create the right environment for these relationships to flourish, it's a reality we all treasure.

One of Angela's friends asked her shortly after Dave died if she had yet been able to find any blessings in his passing. From the way Angela tells the story, her friend quickly realized it was too early to ask that question. But Angela tucked it in her mind and when our relationship started to materialize, the question came back to her. Maybe this was one of the blessings? While we have both said repeatedly we would never have wished for this to happen, if it did have to happen, then this outcome is one we can live with.

When my husband's convoy was hit by a suicide bomber in late October 2011, outside of Kabul, I became one of those wives with the men in blue on her front porch. After my official notification was over, they told me that teams had been sent to his father's house and Angela's house. Calls started coming in from his dad's house but nothing from Angela's. Finally, I sat on my bedroom floor with the phone in my hand and dialed her number. I don't remember what all I said, but I do remember sobbing as I begged her, "Please, please Angela. Just let me see the kids one more time." Her answer will forever be emblazoned on my mind. "August, I know how much you love my kids and how much they love you. I will never keep them from you." My moment of sheer panic at not seeing my Bonus Kids vanished, and Angela and I began our unique walk together as moms of kids who have lost their dad.

Because of the timing of Dave's death, those first few months were filled with holidays: Thanksgiving, his birthday, Christmas, New Years. Because he was supposed to be deployed, my boys and I already had plans to be with family on Thanksgiving and Christmas. Apparently, that happened because I've seen the pictures; I don't remember any of it, but there is proof we were there. Looking back, I wish we had all been together that first year but my head was cloudy and logistical planning was not on my list of possibilities.

The idea of the next day, even the next hour, was hard enough to cope with, so trying to conceptualize the next year's holiday plans was impossible. But then Dave's sister stepped in and everything changed. A few months before Thanksgiving, my sister-in-law reached out to me with an invitation. Why didn't I bring my boys down to Houston and join her, the family, and Dave's ex-wife and her kids? All four of Dave's kids could celebrate Thanksgiving and what would have been Dave's 43rd birthday as one family.

I will admit at first pass I wasn't sure this was a good idea. Angela, Dave's ex-wife, and I had become closer through all the craziness of his death. We were openly committed to keeping all four kids as connected as possible. She and her kids had even stayed at my house early that year for the burial ceremony at Arlington National Cemetery. But a major holiday? With a family I hadn't spent much time with? And his ex-wife?

There were people in my life who thought I had lost my mind when I accepted the invite. But, fortunately, my head had cleared enough for me to realize what an opportunity this really was, and I jumped on the internet and bought tickets for three of us to head south. It was emotionally rough; his death still felt new and being around a large extended family made me feel even more alone. But watching my two boys spend time with Corbin and Gillian brought a much needed smile to my face. They reveled in each other's company and had a great time just being normal kids with their mass of cousins.

But something else really important happened: Angela and I had time together. We laughed at the same crazy things Dave had done during her marriage to him and to me. We got sad his kids were without a dad. And we realized we had a lot in common. As hard as that first Thanksgiving was, becoming friends with my late husband's ex-wife was an unexpected, but much appreciated, gift.

My favorite moment that year was when we looked at each other and realized that, while Dave had his faults, he had amazingly good taste when it came to picking wives.

We enjoyed our time there so much that when our sister-in-law invited us back to Houston for the next Thanksgiving, Angela and I both accepted the invitation. Another trip to Houston. Another long weekend with a huge extended family. Another chance for long talks with Angela. And the tradition of sharing holidays with each other became our reality.

Over the last few years, the specific holiday we celebrate has changed. Instead of celebrating Thanksgiving in Houston, we are now honoring our relationships over Memorial Day weekend at the TAPS National Military Survivor Seminar. This year was the first time all six of us could be together, but it was amazing. Corbin skipped his high school graduation to be there and with true TAPS magic, he walked across the stage in his cap and gown in front of his TAPS family. And we were both there. Both of us in tears. Both so amazed at that boy who lost his dad and is now on the verge of being a man any kind of momma, with any title, would be proud to love.

Gillian has already announced that she will be skipping her formal graduation this year, opting instead for a TAPS graduation. I will be sitting beside Angela again, both of us crying, watching this sweet girl as she grows into an amazing woman in her own right.

Angela and I agreed in those first few horrible hours after the notification teams left that the kids should stay as close as possible. And while some things never change, the kids will always have their siblings, other things do shift over time. Angela went from Dad's first wife to half mom. And she and I went from former wives to friends. We've traveled to Texas. They've traveled to D.C. We might even meet in the middle one of these days. But no matter what the landscape looks like, we'll all be together to celebrate a special day.

And really, aren't family and friends - no matter the title - the most important thing about holidays?

By August Cabrera, Surviving spouse of Army Lt. Col. David Cabrera: August is raising her boys with the love and support of her friends, family and fiancée near Washington, D.C. Currently pursuing a degree in writing, she says, "I kept waiting for the right time to follow my dreams, but it turns out now is all we have." She believes in teaching her boys to be grateful for what is, not wishing for what was. And according to her, her TAPS family is near the top of the list of things she is grateful for in her life.
Related Articles: