Lenzy Ruffin has been a volunteer with TAPS since the 2016 National Military Survivor Seminar. He took amazing photos during the weekend event to capture the meaning and connection of the TAPS family. Since then, he also covered the Army Ten-Miler in October for Team TAPS. Before becoming a professional photographer, Lenzy served as a lieutenant in the U.S. Army. TAPS is so grateful for Lenzy's service to our country and willingness to share his talent as a photographer to help TAPS tell our story through images. Please read an excerpt from his blog below, in which he describes his first experience with TAPS families.

"I've never seen anything like it. The TAPS seminar really is just a big family gathering. You can't be involved and not become a part of the family. Normally, as a photographer, I'm detached from the event I'm covering because I'm focused on capturing the images I was commissioned to get. I don't endeavor to be detached, I just get focused on my task of capturing moments, which generally disallows experiencing the moment. But that wasn't the case with TAPS. I realized that when the closing dinner was winding down and I was sad that the weekend was over. Normally, I'm happy the event is over so I can go home. I thought about the stories that parents had told me about how much the kids look forward to the TAPS seminar every year so they can go see all their TAPS friends. I totally get it. I know how sad those kids must be that the weekend is over because their sadness is mine. And I don't even know any of those people. I was there for only two days and those people are now family to me. That's just how incredible this event is. It's magical. All these people come together to heal and some magic happens and then something way beyond healing goes on. I went there not for healing, but to volunteer, and ended up leaving enriched in a way that I am honestly having a real challenge to describe. I don't think my words are conveying how I feel about what I experienced this weekend. TAPS is just incredible. In-cre-di-ble." 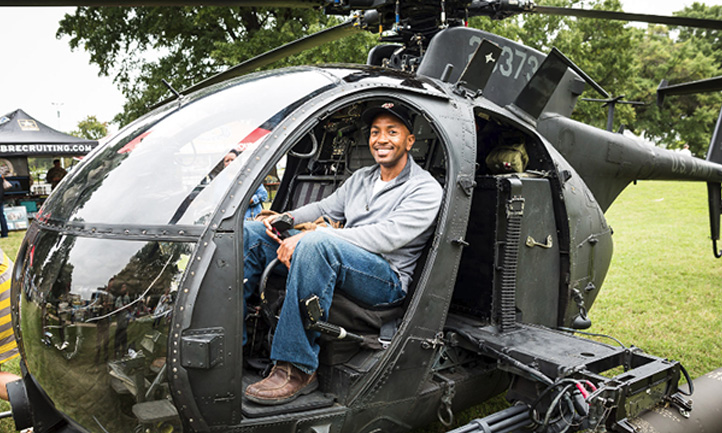 Photographer Lenzy Ruffin finds himself on the other end of the camera at the Army Ten-Miler Expo in October. Photo Courtesy Lenzy Ruffin Photography.

To learn more about Lenzy and his work, visit his website at http://www.lenzyruffin.com/