The wearing of names on the back of uniforms is nothing new. It began as a way of identifying a favored player from the cheap seats. It is used today in professional ranks and most college athletic programs. Rarely does it make it to the high school level. 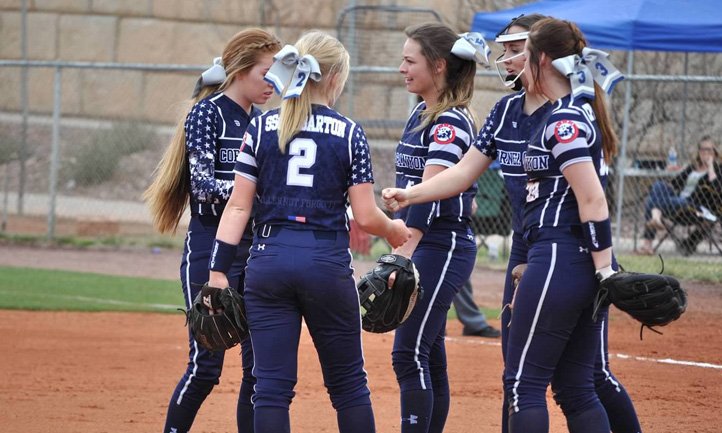 The Corner Canyon High School girls softball team, in Draper, Utah, is bucking that trend and wearing names on the backs of their jerseys. But it isn't an attempt to discern one player from another. Nor is it done for vanity reasons. It is purely selfless, not calling attention to the players themselves.

Instead of their own names, the Chargers uniforms are adorned with the names of Utahns who gave the ultimate sacrifice: fallen soldiers.

"There are a lot of programs out there to bring awareness to different things, and we participate in some of them," Corner Canyon softball coach Garrett Hone said. "This year we wanted something different, something that would honor our military and at the same time perhaps have an impact on our girls."

According to Corner Canyon principal Mary Bailey, the idea for honoring the soldiers came from assistant coach Quinn Linde.

"I had seen a news story on TV where a young football team did something to honor fallen soldiers," Linde said. "The coach had served in Iraq and was finding a way to honor friends he had lost. I thought it was a great idea we could try at the high school level. I thought our girls would benefit from it."

Although Linde never served, he was around veterans, working with them while at Utah Valley University. The idea of honoring fallen soldiers was something he thought Corner Canyon should try.

"I didn't want just a random list of soldiers," Linde said. "I wanted to honor those from Utah."

Once it was approved, Corner Canyon contacted TAPS. Linde first heard of TAPS when he was at Utah Valley University. He knew they offered compassionate care to all those grieving the death of a loved one serving in our Armed Forces. If anyone could help make his idea a reality, TAPS could do it. After learning about the team's project, Team TAPS Director Marie Campbell contacted families of the fallen from Utah for permission and received enough approvals to uniform the entire team.

The uniforms feature stars on one sleeve and stripes on the other. The soldier's name appears just above the player's number on the back of the uniform. Under the number is the phrase "Fallen, not forgotten."

"This is such an amazing thing for this team to do for us," Christi Barton said. "I can't put into words how wonderful it is that these girls would honor all of our soldiers who they didn't know and aren't family to them."

It's been nearly three years since Barton's son, Zack, died while serving in the Air Force. Zack's name appears on the back of freshman infielder Josee Haycock's uniform.

"When [Haycock] sent me a picture of her in her uniform, I cried," Barton said. "It is so wonderful that they are honoring our sons, daughters, husbands and wives. The coach told me the girls have loved what they are doing and have a deeper appreciation of our military. Keeping Zack's name out there is really important to us, and this is very helpful."

Hone took additional steps to help his Chargers grow from this experience. Making it more than just a token attempt at wearing the uniform, Hone has his girls contact and talk to the families. Many now have strong friendships with them and even consider them family.

"The girls contact their respective families once each week," Hone said. "Sometimes it is through email, sometimes text and sometimes even a call. I want the girls to understand more about the soldier and their families. Sometimes a family just needs someone there to listen."

Suzanne Wagstaff agrees. Her son, Matt, died while flying a helicopter in Afghanistan in 2010.

"Sometimes the hardest part about being a Gold Star is so many people are afraid to approach you," Wagstaff said. "They don't know what to say and don't want to offend us. But we want to share our stories about our soldiers. We want to talk."

"She wanted to know Matt's story, and I could talk about Matt all day long," Wagstaff said. "This girl was way excited to learn about him. I love this program. The more we share the memory of our loved ones, the more the memory lives on. Also, with the generation today and the world they live in, it is important that they understand what our freedoms are and about the price paid to keep those freedoms."

The uniforms are currently being worn only at home games. But the impact for the girls lingers on after the final pitch.

"When I first heard we were going to do it, I thought it was an awesome opportunity," senior captain Brianna Carroll said. "It is more than I imagined, however. When we wear the uniforms, we actually play better."

Carroll honors Marine Cpl. Adam Galvez, who died in Iraq in 2006. Carroll has emailed and even called Galvez's family.

"I have found out what an outstanding soldier and person he was," Carroll said. "President Bush even spoke of him. When I wear the uniform, I feel like I am playing for him and his family."

The team has found a way to honor their soldiers even when not in the uniform.

"When we don't wear the uniforms, we write the names of our soldiers on our arms," added senior first baseman Madalin Healy. "My soldier's wife told me my soldier would think this is so cool. We always give it our all, whether we win or lose."

The team played in a softball tournament in St. George, Utah, in March. Most teams go eat pizza or some other activity before the tournament. This year, Hone and Linde took the girls up in the mountains for a special time to share their fallen heroes' stories with each other. They spent two hours learning more about sacrifice and its many faces.

With Draper located between Camp Williams and Hill Air Force Base, the Corner Canyon team is used to seeing military uniforms around town. However, the season-long experience of meeting the families, learning their stories and celebrating their lives taught them the true meaning of sacrifice. It also promoted community awareness for America's fallen heroes and strengthened the relationship with local military families and servicemembers. Many of whom now attend the Charger games regularly, including a group of 50 to 60 Patriot Guard riders who support the team.

Throughout the season, the parents have been as supportive as the players. After they first heard Linde's idea, the parents agreed unanimously that it was a good idea for their daughters to learn about service and sacrifice. But along the way, they also learned more about what it really means to sacrifice.

Haycock's father contacted Barton after the season ended to tell her his family saw the flag flying while they were on vacation. He said they now understood what it costs for that flag to keep waving. He thanked her for sharing Zack's story with the Corner Canyon players, parents, students and faculty.

Hone decided the girls will wear the same soldier's name throughout their careers at Corner Canyon. Next season, the new freshman will receive a match with a fallen hero and their family to carry on the tradition. The families of all the soldiers also attended a home game in May, and the Corner Canyon faculty played the students in a basketball game with the proceeds going to TAPS.

In fact, word is spreading. The Brighton High School soccer team, from the same school district, is going to take up the idea and work with TAPS in the fall. Are you interested in a creative way to raise awareness for our fallen heroes in your community and have a great idea or want to try something like the Chargers? Email teamtaps@taps.org to learn more.