The landscapers came to my home yesterday. They came in like an unexpected storm - a whirlwind of activity trying to put some level of organization to all the yard's chaos. They have these loud machines that force a blast of air onto an object and catapult it into the air with the goal of moving that item of disorganization into a new, desired location. 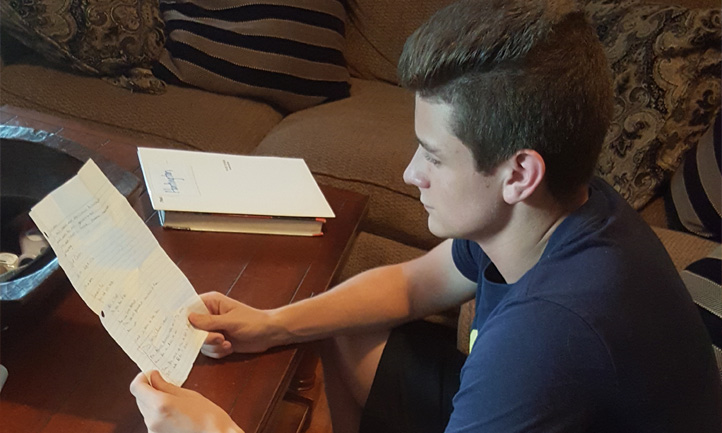 Five years ago, life was neat. It was organized and predictable. My parents served as my landscapers, carefully crafting a plan for me. My life was groomed like our lawn - ordered, nice to look at and full of fun times. Nearly perfect. There were a few weeds that would sneak in here and there, but Dad would knock them out as soon as they sprouted - both in our lawn and in my life.

My dad, Col. David McCracken, died Sept. 2, 2011, after an 11-month battle with brain cancer. He came home sick from Iraq, complaining of headaches. My older brother, sister and I watched as he declined and became less strong, less sharp and less aware - but always, still my dad. I was in sixth grade when we received the news of his cancer and had just started seventh grade when he died. I was unexpectedly blown into the air like one of those stray leaves in my yard. I had no idea where I'd land.

I transferred schools three weeks after my father's death. Believe it or not, I was happy about it. I had more friends in my new school, and most of them didn't know what I'd been through. I liked that. There is a discomfort that surrounds you when you talk to others about your grief; they don't know how to react or what to say. I try to avoid these interactions at all cost.

I began to accept a few opportunities that came my way (I get that from my mom), from being the middle school mascot to joining the broadcasting team, finding a brotherhood with my high school Air Force JROTC program to serving as president of my student body's Technology Student Association. I tried a little bit of everything just to see where I fit. I needed to fit in. All kids have fathers, but I have lost mine. How do I make my way fatherless?

We found TAPS about a year after my father died, maybe a little sooner, but my mom wasn't ready to take that step. We eventually made it to our first event in Pensacola, Florida. I was amazed that not only were there others like me but I could share my grief with them and they actually understood.

There are people who will step into your life. They will take hold, and they will help you through the turbulence. TAPS has brought many special people into my life: friends who I've made through Good Grief Camps, outstanding leaders and mentors. My mentor, Rick Pyatt, is a former Air Force officer who has become an extension of my family. Our relationship is something I never thought I'd have. He has provided an ear when I needed to talk and exposure to new and amazing experiences. He also inspired me to apply (and hopefully attend) the U.S. Air Force Academy. My sister, Mattie, has also had people step into her life, encouraging her to be the best student and athlete that she can be. Her softball coach, Chad Floyd, has been walking alongside her through this journey, developing an amazingly supportive team whose sole focus isn't on winning. It's about creating memories and events that she'll remember for the rest of her life.

Reflecting this summer over what could be my last Good Grief Camp at the National Military Survivor Seminar, I've been reminded that TAPS truly cares. They want my family and me to heal and see the transformation from chaos to hope. I am continually in awe and, at the same time, uplifted by the hands that reach down to my family and me. From supporting my pursuit to attend the U.S. Air Force Academy to knowing that they are there for me when I experience stressful moments, my TAPS family has helped prepare me for the transition ahead.

I still have work to do. I have to work on gaining the courage to share my story, share my dad's story and navigate that zone of discomfort that is caused by telling my own story of grief. My dad was so many things - a mentor, soldier, leader, educator, exuberant sports fan and an outstanding father. I no longer have one man who fills those roles for me but a fellowship of folks who have stepped into my life to close the gaps.

My father left me a letter before he deployed to Iraq. It was lost for some time and recently found. I'll treasure it always. In the letter he said,

"My Connor, When I was a young man I dreamt about having a son that I would name Connor. And then one day you came into my life and made all my dreams come true. You are far better than even the Connor I dreamt about."

I have a new appreciation for landscapers in their never-ending battle to create some order in all the chaos. As a leaf, I don't know where I'll end up and sometimes I'm not comfortable with the ride, but I'll embrace it. I know that I'll land somewhere safe. My family and I have a support network that we never expected, filled with mentorship, love and leadership - just a few of the qualities that my dad wanted for us. These people believe in us and we in them.

Joseph Campbell perhaps said it best, "We must let go of the life we have planned, so as to accept the one that is waiting for us."