TAPS has provided frontline care and resources to families of the military fallen for 22 years. In 1996, the terrorist bombing of Khobar Towers in Saudi Arabia took the lives of 19 U.S. Air Force personnel and wounded hundreds more. While an act of cowardice claimed these lives, with acts of courage the surviving families reclaimed their futures. TAPS was there, reaching out with care and compassion, from then until now. 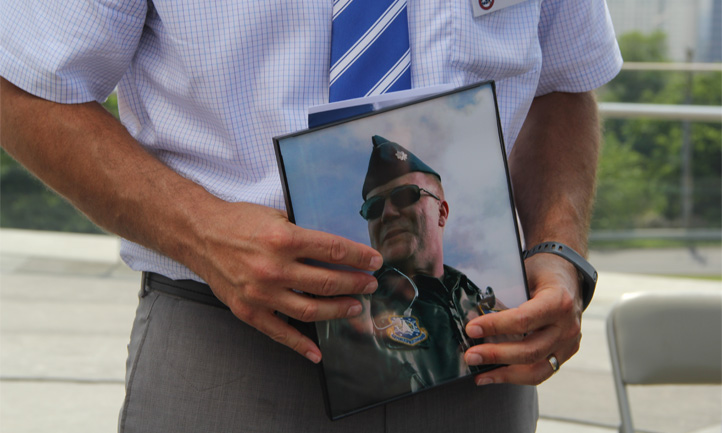 When the bombing occurred, TAPS had been in existence for two years. I lost my husband in the attack. Others lost sons, husbands, uncles and brothers. The fallen were from Eglin, Patrick, Offutt, and Wright-Patterson Air Force Bases. With the families reeling from their loss, Col. Gary Dylewski, Commander of the 33rd Fighter Wing at Eglin AFB, reached out to Bonnie Carroll. Dylewski's wife knew Carroll from a previous assignment and understood the grieving families needed the kind of support only TAPS could provide.

Immediately, TAPS reached out to the families and started championing a unified response. In fact, within the first year, Bonnie and other TAPS staff made multiple trips to Florida to meet with families of the fallen and offer them connections to each other, grief resources and care. Some of the families took time before becoming involved with TAPS, and many are still as active today as they were in the early years after the attack. They still receive TAPS publications and know we are there for them if they need us.

For me, it took two years before I actively started participating with TAPS. I just wasn't ready to personally engage with the activities. But I kept reading the quarterly news journals I received in the mail and eventually attended my first National Military Survivor Seminar. For the first time, I heard people share feelings and thoughts that were so relatable to my own experience of grief. I made friends and started building connections.

Eventually, I became a Peer Mentor, and in October 2000 I ran the Marine Corps Marathon to raise money for TAPS. After that, I was hooked on the run to remember aspect of racing and started Team TAPS as a volunteer. By 2009, I was so involved with Team TAPS that I quit my full-time job to expand the program to new events. I also put my education background to work helping our youngest survivors find healing and courage at Good Grief Camps.

Knowing that the 20th anniversary of the attack was upcoming, I wanted to find a way to welcome other family members and the airmen who served with their fallen loved ones to a special memorial event in Washington, D.C. TAPS rallied with me to host an event that celebrated those who sacrificed their lives 20 years ago. And, we honored all the courageous loved ones who ultimately found hope and healing in a future still rich with possibility.

The 20th Anniversary Remembrance Ceremony, held on July 1, included speeches from FBI director James Comey, one of the lead prosecutors in the 2001 criminal case, and from Retired Lt. Gen. Douglas Robb, the Medical Group Commander in Saudi Arabia in 1996 and the former Director of the Defense Health Agency. More than 100 survivors and guests attended the celebration of those they love and miss.  The ceremony was followed by a wreath laying at the memorial and time for families to share stories of their loved ones.

Most important to me was that those who lost someone in the terror attack would know that all these years later we remember. We remember together. The point of the 20th Anniversary Remembrance Ceremony was to bring us together at an inclusive event so we could look back, reflect and remember in a healing moment.

Many of those who survived that tragic night in Saudi Arabia still hurt and have painful memories of their experience. They were asked to rally for the wounded, return to their missions and lay to rest their battle buddies who served beside them. All these years later, it's still hard for us to acknowledge the profound loss we have shared. It was important for us to come together to share our stories and ultimately find connection and comfort.

At TAPS we know that grief is a long game. It doesn't stop at some magical number of years after our loss. On that morning, as we stood together high on the hill at the Air Force Memorial, the courageous survivors of the Khobar Towers attack recognized there is still healing to be found and comfort to be given as we share our journey.