We hear the first note of the National Anthem, direct our gaze to the Stars and Stripes and, for a moment, we silently and proudly honor our country. With our right hand on heart place. Holding close the memory of what we honor and celebrate. It's what we do. 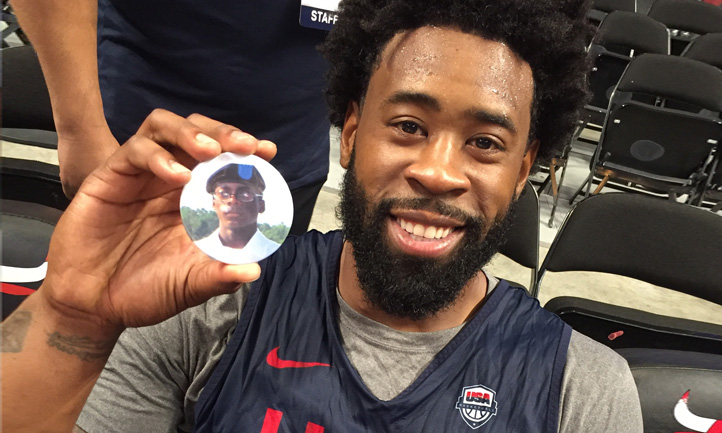 When the American flag is raised high in honor of a competition won, it marks a dream becoming reality. Our hearts fill with pride for these committed athletes who trained and sacrificed for years to accomplish a moment like this. We recognize, in a beautifully patriotic way, the joy and celebration in the sporting arena and the power of the human spirit that exists to break records, honor a nation and bring home gold.

The world watched more than 500 American athletes compete at the Summer Olympics in Rio, and 121 of those athletes brought home a medal. They competed for America, the same country our heroes died serving. In a uniform of a different kind, these athletes brought joy to our country. More importantly, many Olympians found special meaning as our flag was hoisted for the medal ceremony. Hands over their hearts. Honoring the fallen heroes our TAPS families hold dear.

We know firsthand that they too trained for years and then made the ultimate sacrifice for the freedom of America. They didn't climb to the top of a medal stand and put their right hand over their hearts in Rio, but they were there and are with us in spirit every single day.

Over the summer, in partnership with USA Basketball, TAPS survivors were part of the USAB Showcase and Road to Rio games in five cities across America prior to the teams departing for the Olympic Games.

Coach Mike Krzyzewski and Coach Geno Auriemma, along with the USAB leadership, invited families to be a part of team meetings, practices, games and special events. They talked with the teams about TAPS and the honor and sacrifice our heroes and their families have made. Beautiful moments were created in every city along the Road to Rio as TAPS children stood with the teams for the national anthem. Right hand on heart place. Honoring sacrifice. Honoring our fallen heroes.

One TAPS father who met Team USA in Las Vegas remembered the last conversation he had with his son, Tray Daniel, before he died in Kuwait. They talked about the NBA Finals and who would win. In the desert heat, surviving father Chris Daniel was able to meet and talk with the team and honor his fallen son with the sports heroes his son cheered for. Chris was also able to bring his younger son Jaxon to share in the joy of celebrating American athletes and create new traditions of honor as a surviving sibling.

Cut to California where USAB players met TAPS kids and stood on the court with them for the national anthem. They were also invited on court during warmups as ball kids for the players. Children who won't grow up with their military loved one to shoot hoops with them were able to chase stray balls for the preeminent players of our day. More importantly, these players took time on the sidelines to learn about each TAPS hero.

In Chicago, a concept born in the heart of retired General Martin Dempsey, 18th Chairman of the Joint Chiefs of Staff, TAPS board member and now an adviser to the NBA, came to life.  A very special exchange took place. Each survivor in attendance presented a photo button of a fallen hero to a player from the USA Basketball Men's National Team or member of the delegation for them to take to Rio. In return, our survivors received a USAB challenge coin and a hug, warm smile and the words, "thank you."  The Women's National Team did a similar exchange the following evening at the game in Bridgeport, Connecticut. After a final game on American soil and a farewell event in Houston, the players and coaches were off to Rio.

Forty-five fallen heroes went to Rio with our Olympians. They comprised a reserve bench of soldiers, airmen, Coast guardsmen, Marines and sailors. Dempsey was present for the photo button and coin exchange. He stood proudly holding the hand of a TAPS child and watched as images of the heroes in our heart were presented to our heroes on the court. He also talked privately at length with the team about TAPS, our heroes, and the importance of remembering and honoring all those who have served and died and supporting the families they left behind. He told them, "There is nothing we can do for a survivor to replace the loss, but what we can do is we can work to replace the painful memories that they have with new memories, memories like today where some of these young men and women have met their heroes."

General Dempsey later introduced Bonnie Carroll to the team. She shared from her own broken heart what it means to the 60,000 surviving family members in the TAPS family. She wanted the players and coaches to understand that the 45 reserve team members they carried with them represent all our TAPS family - all of those who died in service and those who love them. Seeing the faces of the fallen and reading their names and stories was humbling, and spending time with the survivors was powerful for the players.

"I met a kid. His uncle, Frederick Vasquez, died while protecting our country. He wanted me to have this (holds up the photo button) to take this over to Rio, and it was probably one of the best moments I've ever had," said Kevin Durant, USAB team member and Golden State Warriors forward in a USAB video.

We know that our heroes will never be forgotten; their life and legacy will live on in the hearts of those they touched. "Those who have fallen have protected our freedom; it's something bigger that we're playing for," said Kyrie Irving, USAB team member and Cleveland Cavaliers guard, in the same interview.

The Road to Rio deepened an already strong TAPS relationship with the NBA, WNBA and USAB. When the USA Basketball Men's and Women's teams took home Olympic gold and the flag flew in Rio, it was beautiful to see every member of the team have their right hand on heart place during the national anthem. We know our heroes are in our hearts, and now we know they were in the players' hearts, too.

“I cannot express to you all what joy you have brought to our broken home. My kids were the happiest I have ever seen them! The only thing I can compare this experience you gave them to was if you were to bring their father back and put him in front of them. They cried, they laughed, they smiled like I remember when he was alive. A moment of real life was back in their eyes. I thought it was forever lost. I say this and write it to you with humble emotion and tears in my eyes. We love you TAPS! Thank you for all you do for people who have to survive with a broken heart everyday. Thank you for bringing them all they need to be a SURVIVOR! TAPS you give your ALL to families, and I thank your full compassionate circle of workers and volunteers who work so hard for people who need you most! In the words of Tina Turner, ‘You’re Simply The Best!’
Love, The Rodgers Family”